Interview: Giuseppe Luongo – I think the future (MXGP) is 20 rounds 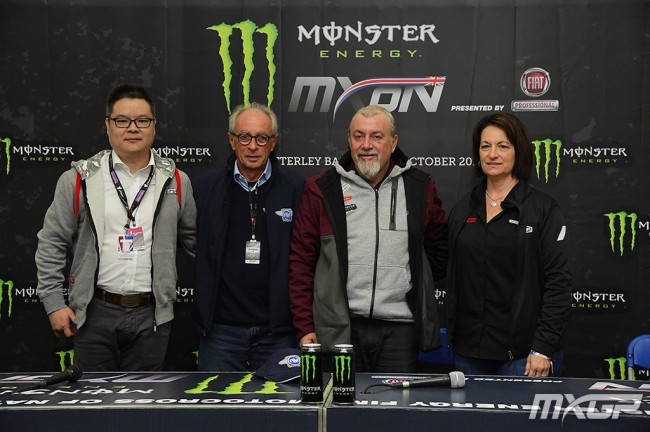 Giuseppe Luongo isn’t afraid to give his opinion.

And after the announcement of upcoming GPs in China for 2019, Red Bud hosting the Nations but no US GP in 2018 and Spain back on the calendar, we caught up with Giuseppe to talk about the changes to the series for 2018.

And we find out if there is any chance the MXGP calendar will be adjusted to suit team USA at the MXoN and get Giuseppe’s view on the U23 rule and some manufacturers appearing to pull out of the series.

A few things to talk about! No USGP, is that to help the riders race at Red Bud?

Yes we want to concentrate promotion and everything for Red Bud. It’s a long time the MXoN has been in the USA and we want to make all the effort into the MXoN.

Will there be a USGP the year after?

Yeah, it is our plan together with MX Sports.

The date for Nations, will that be moved forward to help the American star riders compete or will it still be the end of September?

The level of GPs is really high at the minute but there appears to be a couple of manufacturers pulling out? Does that worry you?

Look, I personally believe we will continue to have all the manufacturer present in maybe a different way. The majority of manufacturers I believe are very happy with MXGP. The last years Yamaha, Honda in MXGP, KTM, Husqvarna have multiplied their investment. When you see the price of the riders in MXGP over the last five years it’s multiplied by two or three the earnings of a top rider. In MotoGP for example Kawasaki is not there so it can be a choice. I believe the choice by Suzuki is not a final choice, I think Suzuki will maybe be present in another format. I think the Japanese manufacturers as long as they produce motocross bikes will continue to be present.

There has been a bit of talk about adjusting the age rule in MX2, is there any truth to that?

No, we are very, very happy with how the system works. The MXGP class is really the highest in the world and we have too many riders very fast and this is thanks to the system. The U23 not only puts the riders in MXGP but it allows the EMX2 riders to come in to MX2. The kids, every step they make, they will find a good team, I want them to be in good teams. if you have a rider who is 28 or 30 there they occupy the place for the young talented riders to arrive. I don’t want young riders to arrive in MX2 on a team that isn’t as good, it will stop their progression.

It appears Jorge Prado and Hunter Lawrence will go to the USA in 2019, do you like that when they go to show the level of MXGP or is it better they stay in MXGP?

We have proved with our pyramid system that we have many young talents. So I think we have enough riders for MXGP and also to go to America. In one way it is also very good promotion for MXGP because if riders from our young championships and our system and they go to America and are successful, it is a very good promotion for us. It is a free market, if a rider loves supercross, for sure they have to go to America, it’s the product they have (USA). For a rider who loves motocross MXGP, is the best product.

And on the length of the championship will that stay around 18-20 rounds?

Yeah I think the future is 20 rounds, it will stabilise around that. MXGP is very successful, they last years we have more organisers wanting to have the raise. The world is smaller now with social media and there is more interest everywhere and we need the 20 races to satisfy everybody.

You have announced the Chinese GP, it is a huge market and I know with snooker there is a massive audience there now who follow that sport with the Chinese players, do you hope for something similar with motocross?

In China it’s important with the right people like everywhere. The group we make the agreement with is very strong and we have this on the plan that we think it will explode. It is a country of one billion people hungry for everything so for this it is up to us to present it well and to develop an academy with the kids, we want to develop the culture of motocross there.