Brylyakov on switching to Yamaha 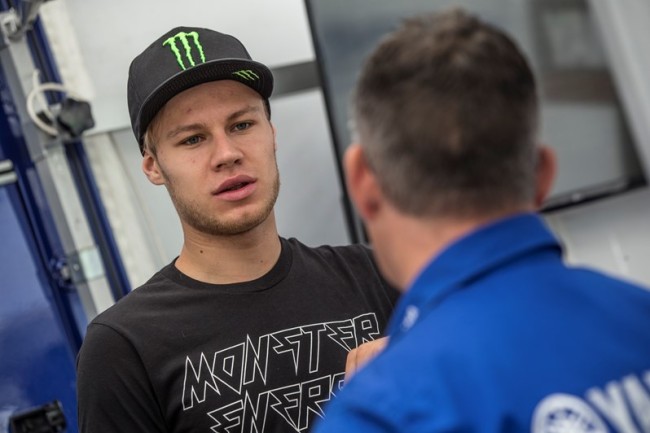 Yamaha interview: Dust has barely settled on the 2017 season and already anticipation for the new season is mounting, particularly for Kemea Yamaha Official MX2 as they have just signed a new rider – one of MX2’s biggest talents going into 2018 – Vsevolod Brylyakov.

Vsevolod Brylyakov is a twenty-two-year old Russian with an immense hunger to be the best in the world. His talent combined with the extreme professionalism and structure of the Kemea Yamaha Official MX2 set-up could be a pivotal move in the youngster’s career, and this is something he realises.”I have always wanted to be on a team like this” Brylyakov said, “it looks very professional and very organized. I have always looked at Yamaha’s program and thought it looks good. You can see how much the brand is investing in its riders and how much they support the development of the championship, and this makes it easy to trust the people around you and it helps you believe in yourself and stay motivated.”

Two injury struck seasons in MX2 have prevented him from reaching his full potential, but he is determined to come back stronger than ever in 2018. “In 2016, I broke my ankle while training in Lommel in July. That was a bad injury but I recovered really good. It took like four or five weeks and then I was able to ride again, but then we decided not to do the rest of the GP’s in that year because I wanted to prepare myself for the Motocross of Nations. And then this year, this shoulder injury happened to me in Valkenswaard on the 24th of April. It’s been kind of a nightmare so far. Not knowing what’s going on and going between doctors, surgeons, neurologists and orthopaedic surgeons. It took them a while to find the real problem. They tried everything. It’s now been three and a half months and they finally found the problem. It’s a small dislocation of the shoulder and some muscle weakness.”

Dealing with doctors and medical prognosis’ can be a mind-boggling affair, but for Brylyakov, he doesn’t have time to ‘wait and see’. Everything is either black, or it’s white, the youngster doesn’t believe in ‘sugar-coating’ anything. He prefers a hard-core approach. “I am recovering in Russia at the moment because I feel the doctors are better. I prefer the Russian style of treatment. They are a little bit more real and less caring. They tell you everything straight and I feel like they really dig into the problem rather than tell you to wait.”

After a year in-and-out of hospital, his shoulder is finally making progress and he is already pumped to start a new chapter. “I am so excited to join Kemea Yamaha. Part of that excitement could be because I have been so long away from the bike, but it’s also because it has just been confirmed that I will be starting again on a new bike, a YZ250F with factory support. That is a big deal for a kid like me and I am so excited to start working with them and to ride for a team that has such good structure and organisation, as well as a good bike. I really think I can do big things with a YZ250F and this team behind me. Actually (he laughed), I need to remember to stay calm because I’m so excited, but I need to relax and think about making an easy comeback from injury.”

I never try to predict my results or put a number on it. I know I am a fast guy and a strong contender, I have proved that at a couple of GP’s already. I just need to get all the pieces of the puzzle together and I believe I can do that with Kemea. I am the kind of guy who gives 200% every single hour of every single day to being one of the best out there. It hasn’t happened for me yet because I have had some troubles with injuries but I am looking forward and I believe that everything is going to come together next year.”