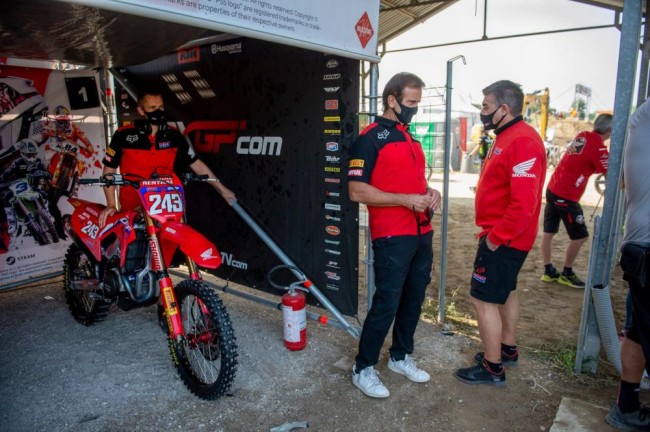 Giacomo Gariboldi has been in the paddock for a number of years now and his experience is invaluable. Having worked with a number of riders in the past, Gariboldi took a young Tim Gajser under his wing to contest in the MX2 World Championship and after having won the first title in 2015 – they are still working together.

The team owner of the HRC Honda team in MXGP has done a wonderful job and this year Mitch Evans was signed up to partner Gajser and during his rookie year in a stacked MXGP class has been impressive. Despite a couple of injuries along the way as he gains more experience he should be a regular front runner.

We caught up with Gariboldi to discuss the season and much more.

Gatedrop: Giacomo, first of all, the MXGP paddock must be very strange this year without fans – what’s the feel like in the paddock compared to normal times?

Gariboldi: Very strange this year like it was in our lives I would say, it was a kind of aseptic paddock, people were even afraid to stop by your team and say hello because we are in times where we have limits for all kind of actions. No public around which made everything sad, at the end you really were not enjoying to be there and just wanted to end up with this season in the best possible way.

Gatedrop: The MXGP World Championship battle is hotting up but Tim has a nice 24 points lead going into Lommel, you must be happy with what he’s showed this year? He’s only won one overall but he’s been super consistent!

Gariboldi: Yes, we are very happy about Tim’s season so far, he has been super consistent winning the most number of motos and one GP so far but the goal in the last GPs was to increase the points lead and not thinking about the race wins. This year we have seven or eight riders all very fast and the tactics are very important, we had 8 winners so far which means many riders on the same speed and level and you have to be very consistent if you want to win this title. 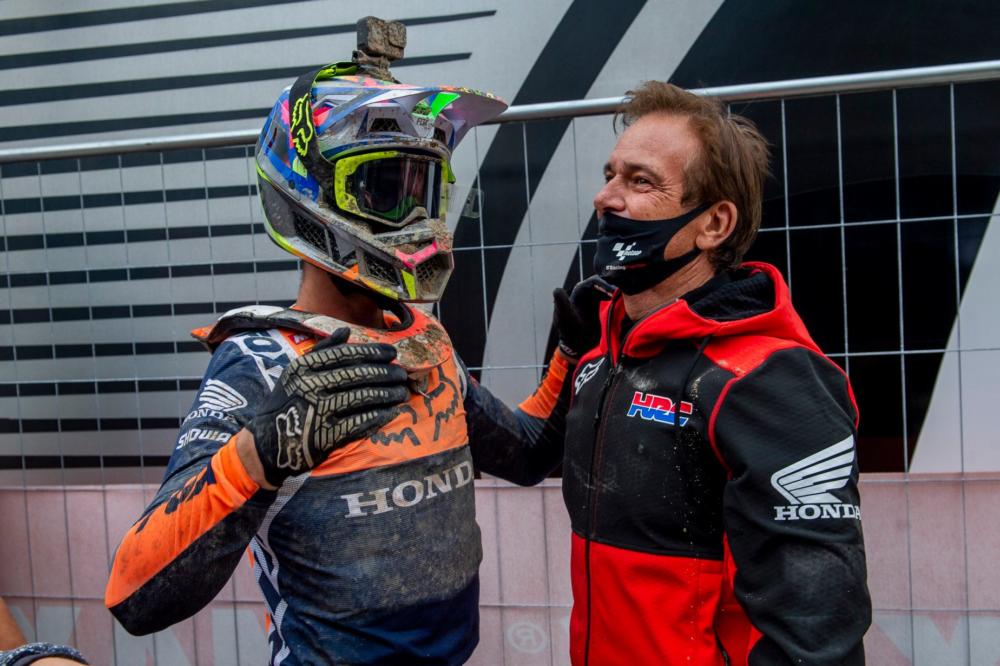 Gatedrop: In Spain, Gajser rode with a lot of maturity settling for third in the first moto. I can’t remember too many races in the past where Gajser hasn’t went for the win if its possible. Are you happy that he now looks at the bigger picture?

Gariboldi: Spain is a great example of Tim this season, he could go for the win in the second moto passing Prado but had to risk a bit more and instead he preferred to settle in second and extend the points lead. We have of course to look at the bigger picture now and try to minimize the mistakes even if this means less GP wins at the end of the season.

As we said it has been such a strange season with the first part at the beginning of the year raced on a normal format, then the long stop of four or five months and back again racing on a one day format and with three GPs in a week; it’s not easy for the riders on the mental side to change all this during the season, this is why I think that the rider who will win in 2020 will be really the most complete athlete ever, you need speed to go with the best, brain to make a tactic on the one day format racing, physic to support the huge efforts of the three GPs in a week and last but not least you have to be able to control your emotions. Motocross is not all about raw speed but a lot about brain.

Gatedrop: Three MXGP’s at Lommel coming up – what’s Gajser’s speed like in the sand and what are you expecting from him at those GP’s?

Gariboldi: Lommel for me it will be the key of the season. Anybody could make there big mistakes and loose heavy points. I’m quite confident with the speed Tim has shown this year on sand tracks even being faster than JH in Valkenswaard and we don’t have to forget that he won the GP last year in Lommel so we know that we go there now with a lot of confidence, then, brain will make again the difference on these conditions. 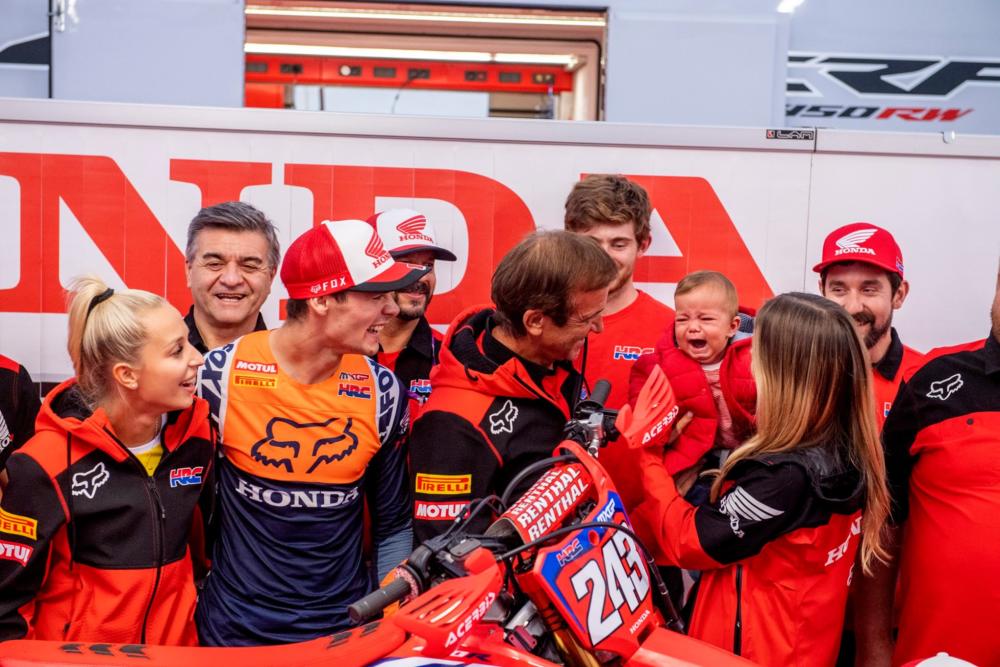 Gatedrop: I have to ask you about Jorge Prado, you probably don’t want to talk about a rival too much but how impressed have you been with him during his rookie year and his technical style? 2021 could be a lot of fun for the championship battle..

Gariboldi: At the beginning of the season in some interview I had declared that the biggest danger for Tim winning his fourth title was coming from Prado, so for me it’s not a surprise at all. He has speed, brain, class -everything you need to be a title contender from his first season in MXGP. Tim won his first MXGP title when he was a rookie so I really believed Jorge could do the same. In 2021 he will be a treat for the win more than anybody else.

Gatedrop: Unfortunately, Mitch Evans picked up an injury in Spain but before that he showed some great pace. You must be pleased with how his rookie season went injuries aside?

Gariboldi: Mitch started the season in January even beating Tim in Mantova at the Internazionali d’Italia in one moto and was impressive, we knew we had a top rider for the podiums this year beside Tim and this was the goal of Team HRC. Then he broke his shoulder in Valkenswaard and it took time to come back to his best but, in these last few rounds he showed he was there to battle for the top three places and unfortunately he had another crash which ended his season.

He is still learning, we don’t have to forget that he is only 20 and he is riding the 450 bike like the best in the world, he has everything – speed, style, physic. He just misses some experience to be there on top but I’m sure that with him we have two top guns in the team for the years to come. 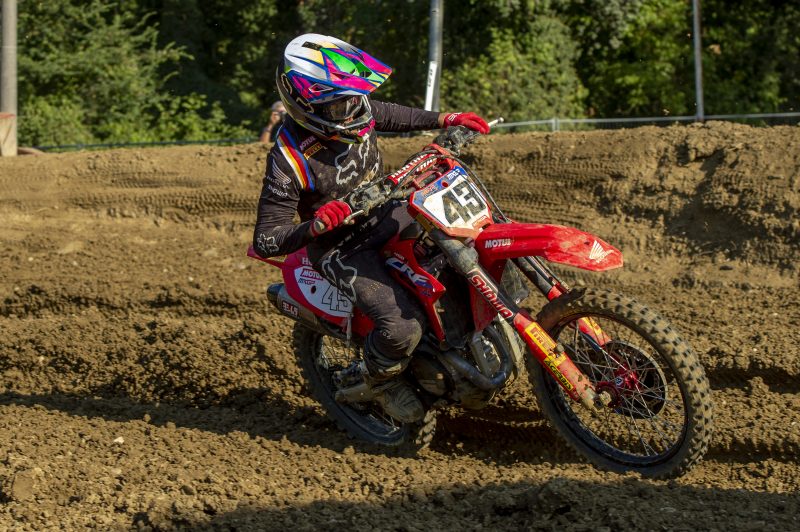 Evans has been impressive in his rookie MXGP year. Pic: Shot by Bavo

Gatedrop: Do you know if the team will sign up a replacement rider for Evans at either Lommel and/or Arco?

Gariboldi: No replacement rider for the end of the season.

Gatedrop: This year due to COVID-19, the MXGP World Championship format is one day, what’s your thoughts on the one day format?

Gariboldi: I personally like it because on the Saturday we race a lot just for the gate pick and you have to take big risks for no points, but I can imagine some riders can struggle with the one day format because they don’t have enough time to learn the track. In US it’s a standard format for all outdoors and looks like it works well for them.

Gatedrop: We’ve also had triple events at Kegums, Faenza, Mantova and will have two more at Lommel and Arco. What’s your thoughts on the triple header events?

Gariboldi: That’s a very good solution to save costs and expenses for the teams but maybe three is too much while sometimes to have two GPs on the same track could be clever and a nice solution especially when the promoter wants to keep the huge number of 20 GP’s per season. 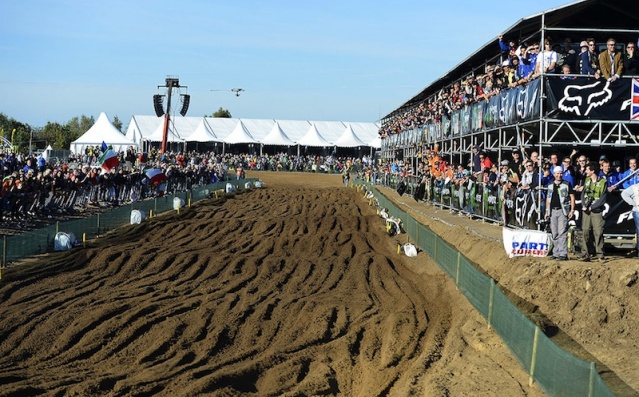 Three GP’s at Lommel are next on the MXGP calendar. Pic: Infront Moto Racing

Gatedrop: I feel like we say this every year but the level of MXGP is crazy this year – 7 overall winners in 12 rounds! How would you describe the level?

Gariboldi:  As I said before we have a very high level of riders now in MXGP and the start is the key more than in the previous years. If you don’t start in top three then you struggle to reach the leader because he already made a gap in the first three or four laps. Nice to see anyway!

Gatedrop: There’s been quite a lot of injuries in MXGP this year, in your opinion what could this be down too – track prep, speed of the bikes, the high level?

Gariboldi: Every year unfortunately we have a lot of injuries, last year it was Cairoli, the previous year it was Tim, so I would say this is our sport and we have to deal with it. Tracks are well prepared, maybe now we want to put all these triples or double in SX style which could be more dangerous now than before due to the very high power of the 450 bikes and ramps are sometimes too stiff.

Gatedrop: Brilliant news as HRC recently announced that Evans and Gajser have signed “multi-year deals”, but it didn’t state how many years, any reason for this and will you tell us? You must be happy to have them tied down for the future!

Gariboldi: Yes, we are delighted to have extended both contracts with multi year deals with these two top riders, Tim is already part of this big family of the Team Gariboldi and I’m proud he is spending almost all his career with us. Mitch has started in my satellite team last season on a 250 and I’m proud that thanks to that we could bring him over to Team HRC. The definition “multi-year” is very clear – they will stay many years with us!

Gatedrop: Since Calvin Vlaanderen left the MX2 Honda set up there’s been no factory Honda team in MX2. Is this something being considered for the future and could it happen? Or perhaps 114 Motorsports Honda could become a factory team?

Gariboldi: It’s still early to know if a factory 250 will come back in the paddock in the next seasons but of course I would be delighted to have one because we need to show that we have a fantastic bike also in the small class but this decision will come from Japan one day, what we can do now is to prepare the best possible bike with the team 114 Motorsports and try to beat the full factory ones. At the end motocross is still 70% about the riders who can win races!