Ferrandis on winning the 250 motocross title, Jett Lawrence and not chasing the money 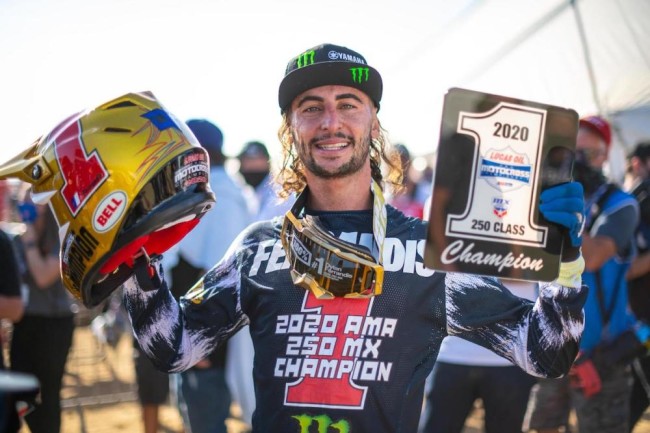 Dylan Ferrandis just had a season he has always dreamt about, having the perfect seaosn in the 250 class in the States winning the 250 supercross title and motocross title in his final year in the class before he moves to the 450 in 2021. This is what Dylan to say on a few subjects at the press conference.

On winning the title

It’s awesome. Really the goal is accomplished. I’m really proud and honored. It’s been a really crazy season. I never dreamed that big to win a supercross and motocross championship in the same year. It’s really awesome. I put the work behind so I kind of feel like I deserve it. We had some ups and downs this outdoors, but the last year finished second behind Adam, that was really something I don’t want to live again. I was so frustrated and I was getting really mad by that. I know what happened.

After the supercross championship, I was not really ready. I wasn’t hungry to win enough and he was, so I paid [for it]. So this year I really wanted to win everything and to be behind the gate for a win and nothing else. That’s what I did. So just awesome. Perfect season for me. Like I said, I had dreams before to be supercross champion and motocross champion too, but doing both the same year is just unexpected and it’s awesome.

I don’t know. We didn’t really think about it. I think right now we think about our future. My future is to move in 450. Most of the riders in 450 have one place in California and one in Florida, so maybe that’s something that we are going to do. Honestly, last year when I won my first championship we paid off the house and that was enough for us. We never had the goal to be rich or nothing. So after that we were just so happy and now I don’t know. The bonus just came and again and again, so it’s awesome.

But we just live a normal life. We don’t need anything more than anyone. Also we have some such crazy sponsors that they already want to make some gift to us. That’s what they told us today. I don’t know. I think maybe we start to look at getting a place in Florida for the future and for being in the best position for next year in 450.

I have a lot of respect for everybody I think, not only Jett. But he’s cool with me. I’m cool with him. I know him. We rode the same team in Europe. He was on 85 and I was riding the MX2 World Championship and we meet over there. At this moment he was a little bit more young and shy, but I was having fun with Hunter at the time. That’s where I met him for the first time. So it was funny to meet him again and ride together now. A lot of respect. What he showed this season is awesome at his age.

We never had a chance to spend time together and give him the advice that I wish I could tell him. Today on the gate we were next to each other in the second moto and I don’t remember what I said but I told him a joke on what to do and what not to do. For sure I think he’s the future of the sport. If he can stay off the fame and the social media that can drive you crazy, I think he can be really a future superstar.

I think Adam and also Chase Sexton, they showed me a little bit the path for next year. So I see what they can do and I feel like I fight with these guys so I can do the same or maybe better if I work hard. So for sure, I’m aware about this challenge but we will put in the work this winter and try it and we’ll see. Everything is going to be new, new team, new bike, new championship. So I can’t really say much now. We’re going to see next year.