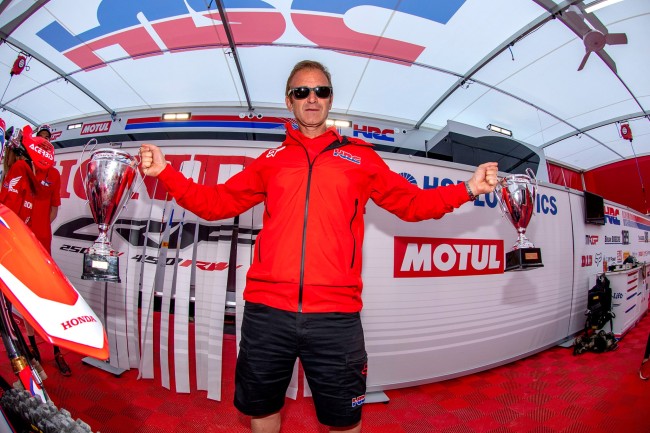 Gariboldi took the decision to sign a young Tim Gajser as he clearly saw his potential and together they’ve won 2 World Championships. Gajser is still only twenty-two so has an incredibly bright future.

We caught up with Giacomo Gariboldi to get his thoughts on Gajser and the rest of the HRC Honda setup.

Gatedrop: Giacomo, Tim was unbelievable in Saint Jean d’Angely, I know he’s had lots of amazing GP’s but for me that was one of his best, if not the best. Where would it rank for you?

Giacomo Gariboldi: Yes really, in Saint Jean it was one of his best ever performances, but for me still the one in Arco, Italy was even more impressive so far this year. There he really pushed Tony to make many mistakes and the duel was just between them two and speed level at that GP was unbelievable, the third rider finished almost 1 minute behind them! But I think the best GP from Tim has yet to come.

Gatedrop: Tim looked really smooth in France and barely made a mistake. In the past he’s made lots of mistakes, is that something he’s been working on to cut out?

Giacomo Gariboldi: True, in the last 2 GP’s Tim didn’t make any mistake and was riding relaxed and enjoying what he was doing. I think he feels now really well in his mind and of course in his body. As he recently said, he feels he has around him a Team which is more a Family, everybody here feels Tim like a brother or a son and when we have bad times we are all together to support each other, you know, it’s now 6 years that Tim is with us and he came when he was really young, don’t forget that now he is only 22!

Gatedrop: After Portugal there was a thirty-four points gap in the championship but after France it’s down to just ten. Did you really expect that to happen coming into round seven?

Giacomo Gariboldi: Since the beginning of the championship we never focus on the points because it’s such a long season that every time something can happen. I think that when you have so many rounds, luck eventually balances out, and Tim paid already his duty in Mantova.

Gatedrop: The first moto in Valkenswaard and Mantova really didn’t go well for Tim with lots of mistakes. What did you and Tim discuss after those tough races because he looks to have put it all behind him?

Giacomo Gariboldi: You don’t have to tell Tim a lot about mistakes because he is the kind of rider that he knows himself what went wrong and he learns quickly from his mistakes, he just needs to feel around him support and love, the rest is up to himself, he knows how to put it all behind. Personally when he has bad times I prefer to stand beside him but don’t talk to him because I know that he is upset and knows already what to do next, Tim is clever and doesn’t need many words.

Gatedrop: The past two years were tough for Tim, just how did he deal with it mentally? He looks to have become a better rider because of it and do you think he’s riding the best he ever has this year?

Giacomo Gariboldi: Tim went through two difficult seasons because of injuries which often happen in this sport, he also had to cope with some personal issues that may be sometimes kept the focus on race days a little bit steamy but we all knew that once all this was over he could come back strong as he was in 2016. I strongly believe that we are now seeing the best ever riding from Tim, even better than at the time of his first MXGP title. Somebody says he reminds Everts in his riding style and frankly I agree, with the addition of some extra skill on jumps like his scrubs which are comparable to none at least in Europe.

Gatedrop: On Brian Bogers, what were your expectations for him this year and so far he’s having a solid season – the second moto in Mantova was impressive!

Giacomo Gariboldi: His second moto in Mantova was really impressive because of the speed he showed and of the fighting spirit which we didn’t see before with him! It’s very difficult to judge his season because he went through a very bad injury last year and it’s not easy when you have to come back after one lost season and in a different and competitive class like the MXGP. He is working hard and he will try everything to repeat that fantastic performance of Mantova. He knows that HRC for his name, history and tradition needs to have riders fighting for the top places.

Gatedrop: What’s the latest on Calvin Vlaanderen’s situation, do you know when we can expect him back on the bike yet?

Giacomo Gariboldi: Calvin had his plate and screws removed just after Portugal because of a bad infection and he is healing very well but needed a few weeks of rest, he will be back in Latvia or at the latest in Germany.

Gatedrop: The team’s structure is currently two MXGP riders and one MX2 rider. Do you like this setup and see yourself continue with it for 2020? Vlaanderen has to move up to MXGP of course!

Giacomo Gariboldi: At the moment we don’t have definitive plans from Japan for 2020 and we are waiting to know about line up for next season, the only thing I can confirm to you is that Tim Gajser will be on a CRF450RW for his 7th season with our team!