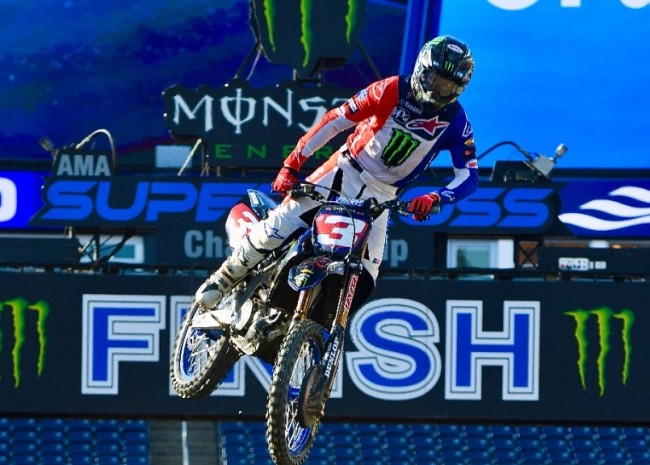 Doug Turney caight up with Eli Tomac on press day at a windy Foxborough to get his thoughts on a brilliant year of supercross and the upcoming outdoor season. The Star Yamaha rider who is maybe in the best form of his career had some interesting things to say as he looks set to win his second supercross title tonight and also talks about Herlings, Cairoli, doing MXGP and the upcoming MXON at Red Bud, in which Eli sounds intent on righting some wrongs from 2018 if he is selected!

Yes, well it’s always hard to compare I’m trying to think how many wins I got in the 2020 season but this year has just been more solid all around and I have been good in all conditions and I think it’s pretty cool what we have done for year one.

Do you think it’s the change of bike/ change of scenery?

The supercross season is coming towards the end then outdoors, have you been testing yet?

I haev started a little bit on that. i think it’s going to be the same thing as supercross, we are starting off on a really good base. Plus, watching Dylan last year I know the bikes works in motocross, and that’s how it feels, so we are off to a really good start and should be able to fit it to me fairly well it think.

There are some rumours Jeffrey Herlings will be coming over to America to contest the outdoors, what do you think about that?

Well, if he does come we know he is super fast! And we know Cairoli is going to come over for a couple of rounds, so it will be cool to race those guys. It’s always a lot of fun to race them when i have raced those guys at a couple of GPs and then a couple of the MXoNs. Yeah, man, if they come over it’s going to be tough!

Have you ever thought about doing some GPs towards the end of your career?

Not so much. I don’t think that’s on my thing to do. Just concentrate on US supercross on motocross, I don’t see myself doing that.

The des Nations is back at Red Bud this year, last time it was a pretty epic session with the mud and everthing. Any desire to get back ont he team and race there and race the Europeans again?

Yeah, if I am one of the top Americans, heck yeah. it would be nice to have a re-do for that one! I was not very happy about that result of last time, I felt like we had a lot more but just didn’t show it.