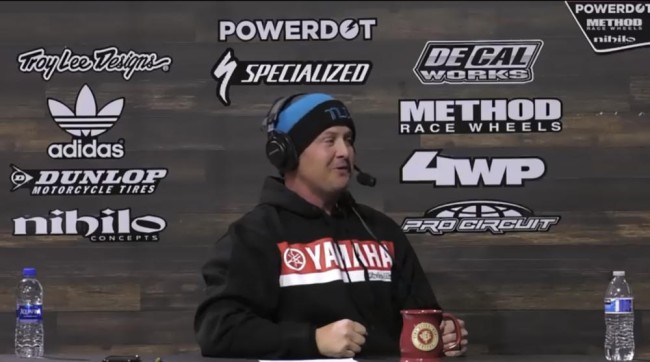 Former 125 supercross winner, David Pingree, has seen all sides of the sport. As a former racer, team manager and now media member, the dry-humoured American has, along with former world and AMA champion, Grant Langston, hosted the very successful Whiskey Throttle show over the last couple of years that has taken the motocross world by storm.

The long-form YouTube interview show has delved deep into the career and lives of legends of the sport, including; Ricky Carmichael, David Bailey, Roger DeCoster, Greg Albertyn and Chad Reed to name just a few, and has proven enthralling to watch as you learn more about the ups and the downs of each racer or industry member’s journey inside and outside of the sport.

We caught up with Pingree to talk about how the show came about and a professional racing career that saw him just miss out on a 125 supercross title in a dramatic final round in 2000.

How did the idea for the show happen? It’s a long format as well which isn’t necessarily in vogue in this era of short attention spans, but it works really well!

I had kicked around the idea for years, but the timing was never quite right. There has never been a podcast in southern California, which is home to every major team and rider [for at least part of the year], so I knew the potential was there to do something unique. I approached GL and he was interested right away, and we had both worked with Donnie before so he was an easy fit. Honestly, it happened quickly. I also knew that our sport didn’t have anything in this format… it is all geared towards quick, sound-bite interviews on current and topical stuff. I wanted to create a digital catalog of biographies, essentially, of these individual’s lives. It seems like it’s resonating with folks and we are having a blast doing it.

Grant Langston is great too because he can bring the GP angle with those guests and his knowledge is superb on both sides, was that a consideration and was anyone else in contention for that role?

He was the only guy I asked. I liked his GP experience and the fact that he was watching the races closely all summer so he was still in the loop. I’ve distanced myself from the professional racing scene a bit and thought it would be good to have a guy who was still plugged in.

Was it hard to get guests at the start and is the success of the show now making that easier?

Not really. GL and I have made so many friendships and built relationships during our careers that we were comfortable asking people. If it was somebody I didn’t have a relationship, GL usually did, and vice versa.

How much prep do you have to do before each interview?

Quite a bit, actually. Even the riders I know well have so many stories that I’ve never heard. Everybody has struggles and tragedy and triumph that most of us don’t know about. Those are the little details that make the interviews so good, in my opinion. And you can only get those gems face-to-face, in a format that allows for as much time as needed. David Bailey’s show, for example, literally moved me to tears several times during the show. If you watch GL and I we are both holding back tears at different points. Once you get these guys opened up and talking about the emotions of their experiences, it gets very personal. I’d say I spend five to six hours prepping for each show.

What is your favourite show so far? I thought Chad Reed’s one was superb and his memory unbelievable! David Bailey was similar in that regard!

Hard to say just one. Mitch Payton, DeCoster, Albee, Carmichael, Twitch, Button, Bailey, Ryno… I’ve enjoyed them all, but those stand out to me.

Interviewing these guys, especially the champions and being around them during your career, what makes them different to very good riders that don’t win titles? I remember an interview with Marnicq Bervoets in 1995, he had been teammates with Greg Albertyn in 1994 and he said the biggest thing he learnt was he felt Albertyn’s self-belief was “almost delusional” and then , in Greg’s interview with you, he said after being lapped three times in his first ever race as a child he thought he could win the next one and that that maybe was “a little delusional!” So is there something to that? These guys are just born with immense self belief as well as talent?

We touched on that in Reed’s interview. The nature VS nurture discussion came up and he believes that champions are born, not made. I think it’s a balance, but there is a massive natural component. You either have the belief system like Albee [and Reed] had, or you have such a desire to win that you’ll push through any fear or doubt to make it happen. Different things motivate different riders, but an abundance of drive to win is the common thread.

The MXGP series seems to have grown a lot in terms of respect in the USA, what is your perspective on it nowadays compared to when you were racing?

You’re absolutely right; I think anybody who is being honest would tell you that the GP elite are faster than their US counterparts in motocross right now. The internet has certainly made it easier to follow GP racing. When I was a kid we only saw snippets in Cycle News weeks later when I was a kid.

In your career you came so close to a 125 supercross title, rode for Mitch Payton won a race against James Stewart, what were your highlights and would you do much different looking back? Also did you ever have the option to go to the 250 class full time or did you just prefer riding 125s?

My four 125 supercross wins, obviously, were big moments. I won all three nights in Bercy in 1995, and that was an incredible experience all the way around. While I had a bunch of good motos outdoors, my only overall podium was Steel City in 1999. I was second, behind Carmichael, and kept him in sight the whole moto. That was as good as a win to me! I also won a bunch of Supermoto races and got a bronze medal at the X Games for Supermoto X. Just being teammates with Wardy and Troy Lee made those some of my favorite days of racing.

I always had the goal of moving up to the 250 class, but there were so few rides back then. The only guys who got factory rides in the 250 class were riders who won 125 titles. So, that was always my goal. At one point I thought about just moving up and doing the privateer thing, but when you’re still competitive in the 125 class and you can make a couple hundred grand, it makes it tough to spend all your money to go racing. Very few guys make that transition from 450 privateer to factory guy. Nick Wey and Weston Peick are maybe the only two I can think of. I do wish I had an opportunity to race a full season on 250’s, because I did like riding them.

Is there an answer to funding in this now very expensive sport? In America teams are going away due to lack of sponsors and in MXGP some riders are bringing sponsor money to teams to keep them going, you have been on all sides being a rider, team manager, and journalist – what is your take on it all?

Our promoters have to loosen up the leash and let race teams have some autonomy. Selling merch in the pits, giving them more room for sponsor activation, better sponsor coverage in the TV broadcast… we’ll never bring in good outside sponsors if those things don’t improve. Listen to Cary Hart talk about it on his episode of the show; he goes into all the things that cost him his deals with Jimmy Johns and Dodge. It’s disturbing. And you can’t steal sponsors from the race teams. Whether it’s CBDMD or Geico, there was some shady deals made that cost riders and teams a lot of money. I’m afraid of what will happen in our sport if the energy drink companies ever walk away.

You work for Vital MX now, do the Whiskey Throttle show, and are still a fireman I believe – how do you fit that all in?!

Well, it isn’t easy… Lol. My work as a firefighter/paramedic is my priority, so it always comes first. But I only work ten to twelve 24-hour shifts per month, which does leave some days off. Those days are filled up as well with show prep, bike testing, and anything else that needs done around the house. I definitely stay busy, but I love all three of my jobs, so I don’t want to cut anything out.

Finally, have you looked into getting the likes of Stefan Everts/ Tony Cairoli on even via zoom?

Absolutely! In fact, I’ve been speaking with Dave King about getting Noyce and Thorpe on the show via Zoom. Of course I’d love to do the interviews in person, but I want to get as many of the GP legends as I can. In fact, we discussed maybe coming back to Farleigh Castle in the next year or two and knocking out as many shows as we can while we’re there. I keep hoping Stefan/JMB/Cairoli will come over for a riding vacation or something and we can get them on then. If not, I’ll definitely try to do it digitally.

To get a feel for the show format, take a look at one of the best shows so far and one David mentioned in the interview, featuring a very open and emotional David Bailey on his brilliant career and devastating injury: