Interview: Davi Millsaps on becoming a rider coach and working with Benny Bloss at BBMX KTM 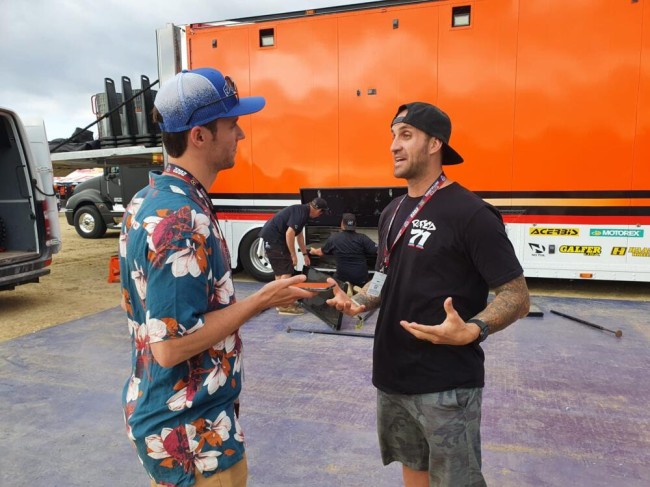 Since hanging up his Motocross boots, Davi Millsaps had been away from the paddock for a while but got the opportunity to return as a rider coach a few years ago and now has a new challenge for the AMA National series. Millsaps is now involved with the BBMX KTM team in a management role with Benny Bloss and Fredrik Noren under the awning.

Marco Kamper caught up with Davi Millsaps after the opening AMA National at Pala.

GateDrop: Davi from being a rider to being a trainer and coaching riders… how did that all come about?

Millsaps: Well, after my retirement, I obviously had the head injury when I called my retirement. I just wasn’t in the right place, I was in a bad state of mind for a good three years. It took me forever to figure out how to deal with it and get back to being the Davi that I was. I started to get better and it just happened at that time I got a phone call to start working as a trainer. I had to get up from the couch so I took the opportunity. It was one of those things, Carson Mumford called me and I thank him so much for that because it got me back of the couch and got me into it. I work with Derek as well, Alex Ray and Benny Bloss.  It was one of those things but once I started it I just enjoyed it so much and I want to keep doing it. It keeps me busy and keeps me in the sport that I grew up loving.

GateDrop: If we look at Carson Mumford, in Supercross his results slowly improved. That sort of success, how does it compare to having your own success as a rider?

Millsaps: I mean going from last year when he was having a hard time making the mains to this year when he was top ten. That alone for me was awesome, I don’t work with him anymore unfortunately or Derek (Drake). The team hired a team trainer and they’re doing their own thing, it is great for them so be it. For me, to see the success and I was able to get them to a point that they didn’t need to worry about qualifying anymore and now they’re battling in the top ten, being up there and one of those guys. I thought that was pretty cool to see.

GateDrop: Do you still keep in contact with Carson, or?

Millsaps: Yeah, every once in a while and Derek too as friends. But again, trainer and friend, you have to separate the two, unfortunately. I have friendships with them but the training side of things with me, what I try and do and what I brought to the table. It’s just with the job, it’s like when you get fired from a job, you don’t have those perks anymore. I will always love the guys and they give me an opportunity that got me back into this so I will always appreciate that, for sure.

GateDrop: There’s been a lot going on with the BBMX KTM team but Benny got the call to race for them. How was that for you?

Millsaps: I mean it worked out nice for me for him to have a ride for the summer. Today didn’t go as planned, he was in ninth place and went down but he was still there. For the injury he had back in December, his ankle was not okay. He’s only had four days on the bike before this race so it’s one of those things we are working into it. I just wanted him to get out of here healthy and he is so we’ll now head to Hangtown. Hopefully we can get the suspension figured out a little bit more and get it better for him and move forward from there. With him being on the team and me knowing the owner of the team, Forrest (Butler) pulling me in to help them and then with Benny’s riding coach… it made my life easy, that’s for sure.

GateDrop: Do you ever ride the bikes and join in on tests day to collect data or anything?

Millsaps: I haven’t rode in a long time. I just started with the team, I know Forrest will probably want me to ride eventually, if I can then I will. But sometimes when I ride my head still bothers me but other times it’s fine. It could be one of those days and I would be alright but I’m not in the shape I was, that’s for sure. I will get at least three laps (laughs). But with Benny, he’s good with what he’s got and we can help him – if he says he doesn’t like something we’ll ask what it’s doing and we’ll figure it out from there. He is pretty good at testing so he doesn’t really need my help or not a lot of my help anyway.