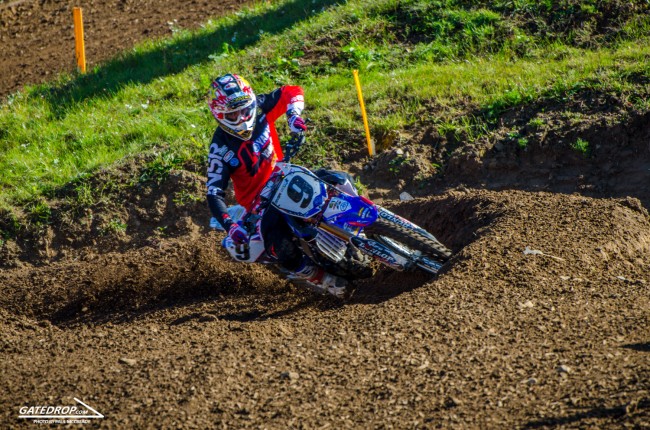 Cooper Webb has impressed everyone over the last two weeks with his performance on the 450 machine. Third overall at Glen Helen and helping USA push France all the way at the Nations has verified Cooper as the leading young rider the USA have right now.

We caught up with a respectful Webb at the end of the day in France to talk about his performance, the differences in tracks and riding styles, plus his now famous run-in with Irish rider Stuart Edmonds!

Gatedrop: You replaced Ryan Dungey and a lot of people thought you might be the weak link, but you were maybe the strongest link and were flying this weekend and last weekend, you obviously love the 450!

Webb: Thank you very much. I love the 450, we didn’t have much time to prepare but we did the best we could. A lot US riders were injured with Ryan and Eli not doing it. It made it interesting I think with me doing it. Like you said, a lot of people were doubting team USA, it was nice to fight and for me to be battling and showing I can run with the world champion was awesome. Overall I’m happy but as racers we all love to win so it’s tough.

Gatedrop: You got great starts all weekend, you’re times weren’t as good as Febvre in practice but when you get the holeshot and he passes you, you are able to up the pace to his level, how did you do that?
Webb: It’s tough because in the US I don’t get could starts so it’s tough for me to be out front! Once he catches me I knew I had to step it up and that’s what I did. I felt like I would make a mistake and he would get around me, then he would make a mistake so it was good battles racing him. Obviously he beat me more than I beat him, but it still it was cool to be racing world champion, it’s an honour for me.

Gatedrop: In the final moto, you passed Justin and it looked like you were going to lead the charge, but then you stalled, how frustrating was that?

Webb: It was very frustrating, I got around Justin and Gautier was right there and the bike stalled. Once I got it fired up it was tough to catch those guys after that gap. I was a little disappointed in my second moto but I did the best I could.

Gatedrop:How did you find the track, it’s very different from America with how tight it was, did you enjoy it?

Webb: It definitely was different but I enjoyed it. I feel like I am a really technical rider and this track was gnarly but in a different way, you almost had to pick the smooth line as the fast line. It’s a nit different in the US where you can just hit the braking bumps as fast as you can. The European riders rode really well on this track and it suited them better but we learned a lot and I think can use what I learned for racing in the US.

Gatedrop: What were the main things you learned from the different riding styles?

Webb: Just that they stand up a lot, it’s hard to say but they almost lift over the bumps and brace for impact and stuff like that and also the way they get creative with their lines was pretty impressive.

Gatedrop: Just on your US season, you won the 250 supercross title only an injury took you out of contention for the outdoors, but it’s been a good year. You have always been in the shadow of Adam Cianciaurulo coming up so how does it feel to finally get the recognition for how good you actually are?

Webb: It’s good! I proved I’m no joke by winning a supercross championship, winning outdoor races and being chosen for the des Nations. This was my best year by far and next year we can only improve but I am very grateful for this year.

Gatedrop: You’re staying 250 next year but will you ride any 450 supercross races?

Gatedrop: Not much of an off-season for you!

Webb: No not too much. I was hurt so I got some time off and I’m very motivated for next year to try and get another supercross championship as well as an outdoor championship.

Gatedrop: Just finally, you had a bit of run-in with Stuart Edmonds after the qualifying race, what was that all about?

Webb: Yeah, we just, we didn’t agree on some things! It was no big conflict, I was trying to get his attention and hit his back tyre, obviously that was disrespectful and I should have gone about it in a different way but yeah, we didn’t’ agree on a few things.