Interview: Christophe Pourcel – back in the MXGP paddock and working with Monticelli 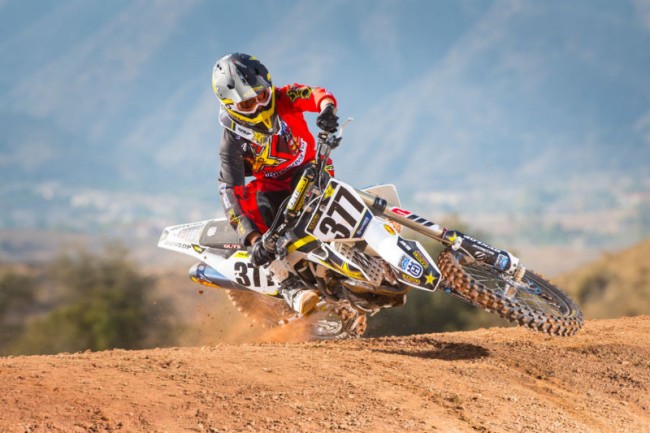 There’s no doubt Christophe Pourcel was one heck of a talent with his riding smooth but he didn’t have things go all his own way during his career. After winning the MX2 World Championship in 2006 it was a question of how may he’d win.

However, in 2007, Pourcel suffered from a crash during the MXGP of Ireland causing partial paralysis. It was a huge blow and at the time it was thought it could have been an end to his riding days.

Clearly though, Pourcel was very determined and not only did he ride a bike again but he made the move to America for the 2009 season and won two titles over there beating America’s best.

Pourcel had a great riding technique and we might not even see a rider like him ever again, his smooth and effortless riding style was great to watch!

We caught up with Pourcel at the MXGP of Loket as he’s back in the GP paddock working with JUST 1 and also helping Ivo Monticelli with his riding.

Gatedrop: So, Christophe, you’re back in the GP paddock and working with Ivo Monticelli, how did the opportunity come about?

Christophe Pourcel: I lived in the US for a long time and I decided to come back to Europe. I’ve been working with JUST 1 for the last few months and the last few years when I was racing too.  I went to a few GP’s and met Ivo. He was looking for someone so we started to talk and see how things go. He’s a European, he’s from Italy and I always loved Italy. He’s a bit like me, we do our own thing and now I’m focusing on him and JUST 1 also. They’re from Italy so it’s very easy for me to work with those guys.

Gatedrop: Is this role relatively new for you or have you worked with younger riders in France or the US before? Or is Ivo the first rider you will help?

Christophe Pourcel:  I’ve helped some kids in France before but it’s not really my thing to help kids from when they’re a kid to become someone because it takes a lot of time. You need to live with the kid and all that stuff so it’s a lot to sacrifice. I’ve been training the kids also in the US, it was a good experience also but very different to what I do now. If you train someone from MXGP the guy is already good, it’s tough to make him better. It’s just a different way of doing training, it’s more like a managerial, supervisor role with Ivo at this time. I guide him in the right direction, help him on the bike and I can ride with him. We will start riding together in a few weeks, right now we are in the process of I’m learning things from him and then this winter and next year, we can make a top ten consistent rider, you know.

Gatedrop: During your short time working with Ivo, what have you been working on and what do you think he needs to improve on to become a consistent top ten MXGP rider?

Christophe Pourcel:  Yeah, the main goal for me right now is the technique. You know, Ivo pushes all the time and that’s no problem for him. He overworks on the bike for sure, he does too much. Once I guide him in the good direction and we ride together, I can help him get some good speed and some good technique. Mostly the technique is the big problem right now and especially on the 450cc.

Gatedrop: When you do get on the bike and ride with him what’s your speed like compared to his?

Christophe Pourcel: A lot faster (laughs). Yeah, it’s just a different way of looking at the track. For me, he’s going to go over all the bumps and I will just go around the track easy. I tell him to follow me and he learns a lot from that. I just slow down but at least he can watch and see what to do differently where you can go the same speed but use no energy at all. Right now, he can only do twenty minutes because the technique is not amazing yet. He gets exhausted but still he’s a pretty strong guy, it’s not because you’re strong that you’re going to be good.

Gatedrop: You love being in America and you even got an American citizenship. I was quite surprised to see you come back over to Europe and in the GP paddock, is it nice to be back over here?

Christophe Pourcel: Yeah, the paddock, I like the GP’s much better for sure. The US, even when you ride or you win, everyone is nice to you but it’s like a big business. You don’t really have any friends, on Friday night you go to the hotel, you ride and then you leave. Here it’s a full weekend and pretty much any mechanic of any rider and stuff, we all know each other and we say hi, we respect each other.  Even me and Tony Cairoli, we are good friends and I’ve a lot of good friends that I raced with and in the US I wouldn’t be able to tell you any friends that I raced against. I just said hello and wouldn’t even shake your hand or anything, it’s just funny. For example, I’ve been racing Barcia for many many years and we barely say hi to each other.

Gatedrop: You’ve obviously rode the GP’s before, how would you describe the level compared to when you rode? Herlings and Cairoli are really fast this year!

Christophe Pourcel: Yeah, I mean I raced Tony more than ten years ago and he’s still on the top today. I raced Paulin also and it’s still the same guy that’s up front. Desalle, he’s been on the podium for the past 7 or 8 years now so it’s the same guys. I think only Herlings came up and these days he’s a lot stronger than the other guys. He most do something different for sure. Otherwise, I would say the industry is more professional now with the TV and stuff. The level of riding, I mean Tony always improves every single year but you can only go so fast, you know. I think they improve the speed with the bike. The bike and electronics and stuff are getting better so the rider can go a bit faster. I don’t think they go much faster than a long time ago, when we watch Stefan Everts 15 years ago, he was already amazing.

Gatedrop: I was at the Moneyglass GP in Ireland the day you got the big injury. That was a bad day for your career but you must be happy you made a comeback after that and to win titles again?

Christophe Pourcel: Yeah, it was a tough injury for sure, especially when it wasn’t my fault directly. I broke my back, being paralyzed and then coming back. It was nice to win again, I wish I didn’t break my back so I would have won a lot more things. But it made me a better person for sure but the pain was a bit too much though. I wish I didn’t crash but it just happened, you know. I was happy to at least be back on the bike. My dream was to go to the US and beat those guys at least once and I did it twice – I almost done it four times! I can’t really complain.

Gatedrop: When you’re back here in the MXGP paddock, does part of you wish you were out there racing or are you just happy to be here working with Ivo?

Christophe Pourcel: I’m happy for sure to be around the GP’s, work with the guys and have more fun just watching. You always wish I could be there because I know I can be fast but even today if I take a bike and win the GP you know, I’ve won GP’s before. You won’t be surprised, I beat Cairoli before, I beat Herlings. You know, if I win what is that going to do, you know? (laughs). I need to win the championship because otherwise it’s just one race.

Gatedrop: Last question, it’s a good time for the French at the moment after winning a lot of MXDN’s. What’s your thoughts on them this year, do you think they can beat America in their home ground?

Christophe Pourcel:  Yeah, I think so. I think we have 4 or 5 guys that are very very good. We’ve won 4 times in a row now. American’s problem is that they only have 1 or 2 good guys and then the third guy is always a 50/50 shot. I remember a few years back they had Andrew Short and then he wasn’t that good all year, in the last moto they went 1-2 and you always win the Des Nations when in the last race they go 1-2. Now it’s France that is always going the best in the last moto so I think France will win because Musquin, Paulin, Febvre, Ferrandis – that’s four guys so even if someone gets injured they still have three top guys. All the other teams are stuck to get three good guys so that’s the problem, it’s more like a team. Like Cairoli, he can’t win the Des Nations by himself, you know? At least we see Lupino riding very good, especially today, amazing. But on the 250cc, who do you pick? There’s a big gap so I wish for Tony he had someone on the 250 but I think France will be the strongest and then US for sure in their home country. I hope France beat them for sure in their home country. It feels good you know, when you beat them there (laughs).