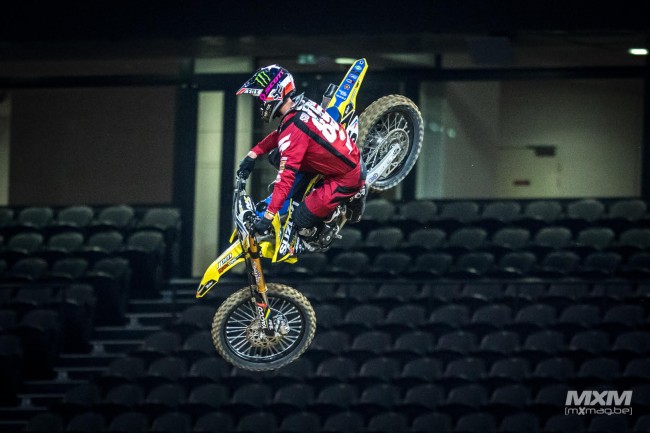 Cedric Soubeyras is already deep into his indoor racing season having competed in the French and German series and now he is preparing for UK Arenacross.

The Frenchman is desperate to finally become the AX champion after losing the title at the last round for the last two years, but he still has one more big goal after that – US supercross!

Once Arenacross is over the flying Frenchman will head to the states to test himself against the Americans, in what he believes is the best form of his life. Loïc Lassence caught up with Soubeyras at the final round of the SX tour.

How has your night went here in Amnéville for the finale of SX Tour?

“So today was the final in Amnéville, it was way better that yesterday, I was riding more free on my bike because the title was in my pocket, I could let the stress go and won the final by passing Pellegrini after a few laps. So yes, my night went really good!”

Your riding is better than ever now, isn’t it?

“Yes, I think so, since I’m with my girlfriend Sophia I’m working differently. She rides motocross too, and she’s with me every single day, we work at home, we also work on the track together and it makes a huge difference. We went all in and it starts to pay. You know, I’m 28 years old now,  like I said I made a lot of mistakes in the past and I learned from it. My goals are to make some finals in USA from February to March so I’m working in this way and hopefully it will work!”

How can you stay in such a good shape all season long?

“You know, I made some mistakes in the past and I learned from it. Today, I’m working even more but differently, few years ago I couldn’t be focused during the all race but now I worked on it and I feel the difference during the race for sure.”

Every series is a bit different can you compare the SX tracks in France, Germany and UK?

“In France, we have all kind of track, we can go to Paris, Geneva which are good and long tracks in a big stadium and then we have tracks like Lyon or Amnéville which are really short with one line. These tracks are more like Arenacross or German supercross.  This year, I did the Stuttgart supercross and it was a perfect training for now. So I would say that we have a little bit of everything in France but Germany and UK are similar.

What are your next goals?

“First of all, I would like to play for the title in Arenacross that I lost two time already. I’m really upset to have lost the red plate at the last race both times, it’s stayed in my mind and I really want to work for it. Then, USA is a big goal for me and I know that I’m on the best shape I ever had so it’s time to go!”