Interview: Brian Hsu on Arenacross UK and his future – dreams of America 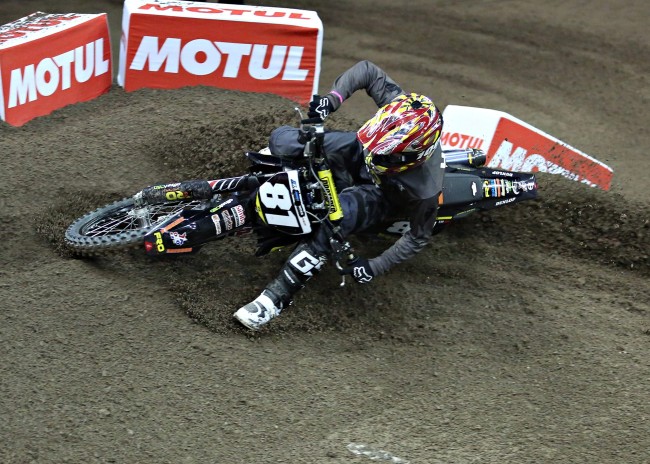 The past few years haven’t went according to plan for young Brian Hsu, in many ways he was a forgotten talent after basically being injured for the past two seasons. We might not even be a full month in 2020 yet but the good news for Hsu is that he’s starting to remind us of his talents on the Supercross track.

Hsu has always been a fan of Supercross and has been racing it the past few months and shining. Not many riders come to the Arenacross UK and win first go but Hsu did exactly that at round one on his 250cc against the bigger bikes. A week before Belfast Hsu had a big crash at Dortmund and was knocked out which makes his ride at Belfast even more impressive.

We caught up with Hsu to discuss the weekend, his career so far and plans for the future – he’s still dreaming of America!

Gatedrop: Brian, after what happened at Dortmund, to come here and go 1-2, you must be over the moon?!

Hsu: Yeah, I crashed last weekend and was actually knocked out, it was a big crash. I was lucky to walk away from that one, I just have a big bruise on my lung and my back. The whole weekend I was just resting and tried to do nothing as I had so much pain. I was actually thinking, “could I make it for Belfast here?”. But you know, I booked the plane tickets so I have to go now (laughs). Anyway, I felt better after the practice, although when I rode more and more the pain came. Somehow I could manage the races and everything went well, I could bare the pain the whole night.

Gatedrop: I was speaking to Mark McCann and he also said you maybe weren’t even going to ride. Initially was your plan just to ride practice to see how you felt?

Hsu: Actually, I wasn’t really thinking about riding or not, I just said to myself to try and ride. I’ve never had the chance to come here to England..

Hsu: Ah Ireland, yes, sorry, for me it’s the same (laughs). Anyway, I got the chance with Fro Systems, I’m really happy to have the chance to come here and race. It turned out good, thanks to the team and also to Ostermann for the bike I can ride. Actually, I wasn’t expecting to win here at all, I just tried to race the track and race myself.

Gatedrop: This was obviously your first Arenacross UK race, how did it compare to anything you’ve raced in the past? Obviously you’ve some SX experience but was this anything similar?

Hsu: The dirt is definitely different, it was like a speedway track. The track was pretty rough for the second day, I’ve never raced with my 250cc against the 450cc’s. In France I ride in the 250cc class and I was winning there. Here, I mean the riders are the same, just like over there in SX2. Just the stadium is new, the track is new, the timetable is new, we ride so many times and so many laps. Even though I was racing against the 450cc’s, I showed them, you know (laughs). I really wasn’t expecting that either from myself.

Gatedrop: Just on racing against the 450cc’s, did they have advantages anywhere on the track or was there not much difference out there between being on a 250cc or a 450cc?

Hsu: Maybe on the starts but I still got the holeshot (laughs). I mean on Friday I got the holeshot and tried to pull away, Ramette was behind me but I think I was just faster, I rode better. Also, today (Saturday),  Lefrancois, he got the holeshot, I had a really bad start but I came around the turn in second. I tried to follow him and I was so close to beating him, so many times we were bar to bar but I just couldn’t make it. Maybe I should have forced it but I was thinking about the future a little and didn’t want to do anything stupid. We got second, a podium, we are going home happy to prepare for the next race. 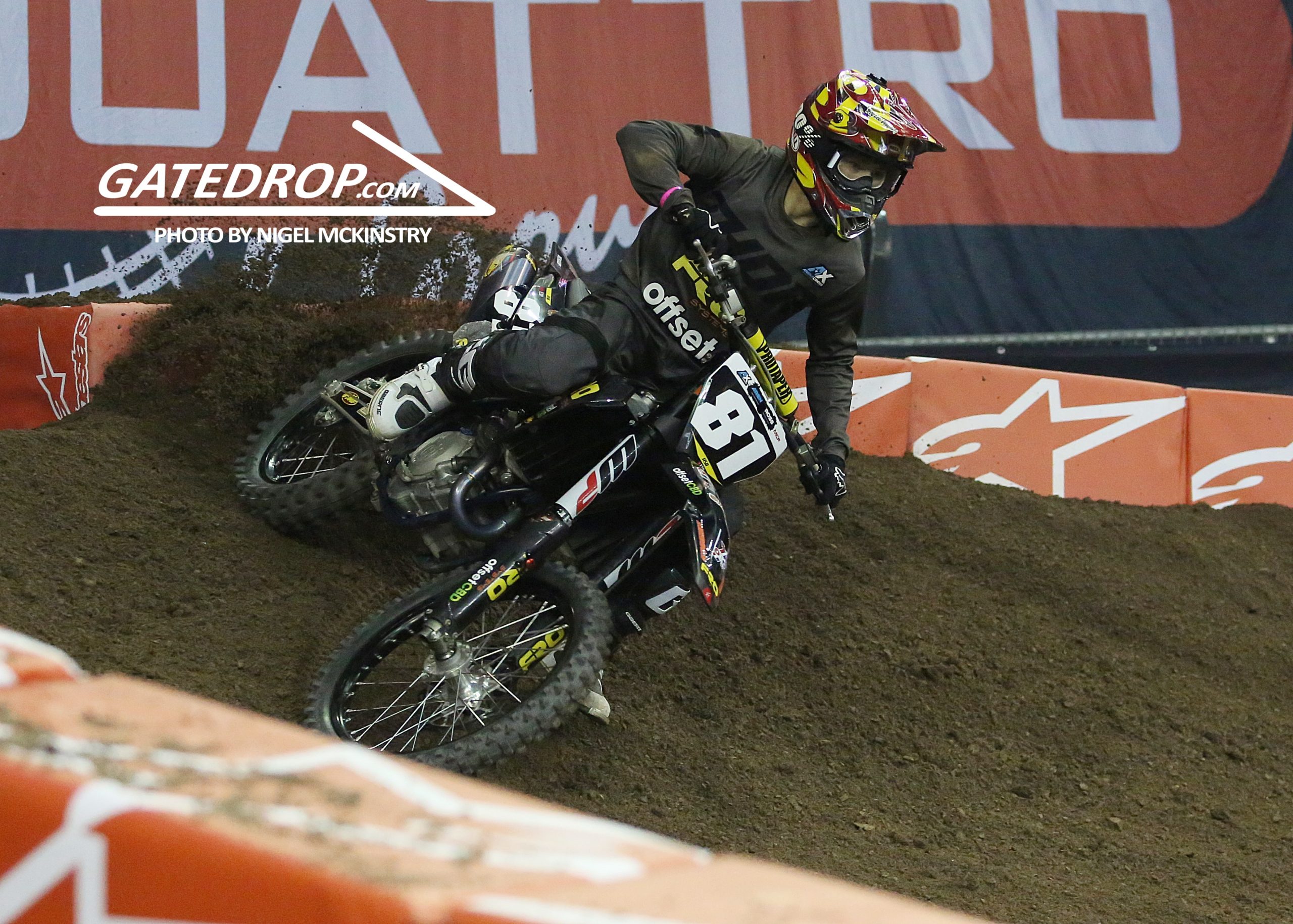 Gatedrop: Do you think racing Supercross and Arenacross races are your future? Are we likely to see you in the Motocross world again?

Hsu: We are going to focus more on Supercross. You know, without a factory team I won’t do the GP series, it’s just a waste of money and you can’t be in the top five. With the smaller teams, they just want money to go to them. Anyway, I will focus more on Supercross, I will finish these races then I’ll do the ADAC MX Masters (In Germany). You know, let’s see, I hope to go to USA. I’m winning here but I’ve always wanted to go to USA. I just need to find a good team and get good technical support.

Gatedrop: When you were racing for Factory Suzuki in the MX2 GP’s, you left the team and went to America without signing a deal and then it fell through. Just what’s the story behind that?

Hsu: That was hard. We went there and the team wasn’t ready yet as they only had the 450cc class (JGR Suzuki). The 250cc team, you know I was there for four weeks and I could only ride one time. It was a bit of trouble I had there so we decided to go back to see what was happening. We went back, signed for another team and the rest is history.

Gatedrop:  When you look back now at everything that’s happened during your career so far, do you have any regrets? When I see you here now, I just think you’re too good to be here to be honest!

Hsu: (laughs) Maybe but that’s just what has happened. I cannot do anything about it, the team just wasn’t ready in America. I was there, maybe I should have stayed longer to see what would have happened but we were already low on budget. We just had to go back and that’s the way it was, I hope for the next time we have a better plan.

Gatedrop: If an MX2 World Championship factory team got a rider injured and called you, would you be interested in that or have you now got a Supercross contract you can’t opt out on?

Hsu: I actually ride for two teams this year for Supercross and outdoors. Ostermann for Supercross and then HTS KTM for the outdoors. I’m thinking I might race one or two GP’s just for fun and to gather experience. I just need a good setup for the bike and that’s all I need.

Gatedrop: You are only 21 years old, so you can still ride GP’s next year, if you got a factory offer for 2021, is that something you’d consider or do you only want America?

Hsu: If I can go to America, I would pack my bags right now and go.

Gatedrop: Why? What is it you love so much about America and why is it your dream?

Hsu: Since I was a little kid, I started to ride on the Supercross track, that’s what I did, always wanted to do and for me the sport is Supercross and then Motocross. Here in Europe, Motocross, I mean for me, it’s boring.  For me as I rider, I can be good at both Motocross and Supercross, I don’t want to waste my talent and skills only racing Motocross. USA, it’s the highest level you can get, I would go there as an underdog and it’s supercross, you know!

Gatedrop: What’s your thoughts on young Jett Lawrence – coming to Europe and winning EMX races at 14 and now racing AMA Supercross at 16 and he’s right at the front!