Interview: Brent Norman on helping Rick Elzinga to get to America and race an AMA National 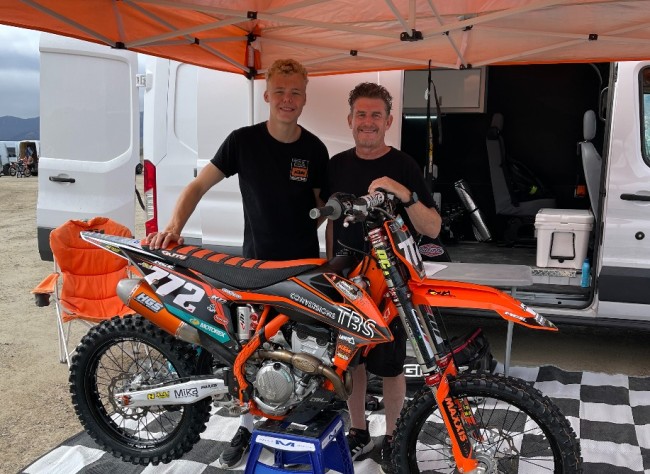 What a cool story this is. Word quickly got out that Rick Elzinga’s future is unknown and that if he doesn’t secure a ride for the 2022 season that will pay him, he might quit racing at a high level. Brent Norman is an American who loves the sport and decided to go out of his way to buy a brand new stock 250cc KTM for Elzinga to race at an AMA National.

Elzinga will race the penultimate round of the series this weekend at Fox Raceway and the Dutch talent who currently sits third in the EMX250 series will be looking to impress. However, for Norman to do what he’s done deserves a lot of respect and is just a great story.

We caught up with Norman to discuss how the opportunity came about and more.

GateDrop: Brent, can you tell is a bit about yourself and how you’re involved in the sport?

Norman: I am just an amateur vet motocross racer and fan based in Southern California. I don’t have any connection to the Motocross industry, aside from giving them lots of money for bikes and parts every year. Motocross has been my sport of choice since I first witnessed racers like Gerrit Wolsink and Roger De Coster come to the States for the United States Grand Prix at Carlsbad Raceway way back in 1976 when I was a little kid. I grew up in the San Diego area, racing locally with riders like Rick Johnson and Ron Lechien, so you could say that my passion for this sport has been in my blood for a long time.

GateDrop: Do you follow the MXGP racing and when did you first become aware of Rick Elzinga?

Norman: Yes, this year I watched every race on MXGP TV. I became aware of Rick after I saw him beat Liam Everts on the last lap at Oss, where he came from eighth place to win the race on the last lap. That drive impressed me tremendously.

GateDrop: You are involved in bringing Elzinga over to race the AMA National at Fox Raceway. How did all this come around and what made you do this for someone you’ve not even met?

Norman: As luck would have it, I broke my foot in a local race in California, and I was sitting around in a cast and bored out of my mind, when I saw a post about Rick on Vitalmx.com that mentioned that he was possibly looking for a ride next year, and that it was a possibility he wanted to try a national Motocross race in the States. I already knew that Rick had talent from seeing him in EMX, so I posted that I could loan him my KTM 450cc race bike and transport to race the Fox national at Pala if he could make it to California in time.

GateDrop: I’m sure you’ve spoken to Rick plenty of times on the phone, what’s it been like putting this together? Stressful I imagine and not cheap!

Norman: Yes, as Rick and I got further into the logistics and planning, we both realized that we had to overcome some large hurdles in order for him to come and race here – Covid restrictions, getting licensed and approved by the USA sanctioning body and the promoter, travel visas, and finally finding a competitive motorcycle for him to race in the event. We spoke several times a day for weeks, and Rick got his clearance to race at literally the last minute.

As to the bike, Rick had to contractually enter the 250cc class for the US Nationals, and since I did not own one, and there were no race ready KTM 250’s available in our area, I ended up purchasing a new 2022 Production KTM 250 SXF from our local KTM dealer. So yes, between a new bike and performance parts, plane tickets, and entry fees, it has been expensive for both of us. But I believe in Rick and his talent, so the cost is small as compared to his tremendous potential.

GateDrop: Rick has done a few days of riding America, seeing him in person how does he look at the practice track?

Norman:  After watching Rick ride here, I would say that he is at or near the elite level of talent that we have racing in the AMA national series. Rick’s lap times at the Glen Helen pro test day this week were only two seconds off of Ken Roczen and Jett Lawrence’s fastest laps. Keep in mind that Rick had never ridden the track before, and is on a bike with a basically stock motor. Imagine if we had more time to prepare and had access to factory equipment. 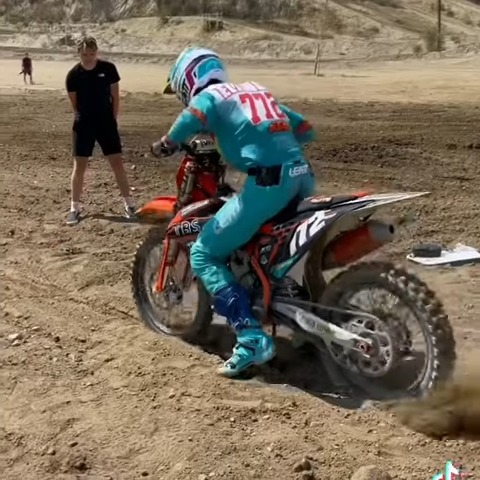 GateDrop: What’s your expectations for him this weekend results wise?

Norman: I would be happy with a top fifteen, and thrilled out of my mind with a top ten. Rick is basically racing a production KTM motorcycle with an almost stock motor against high performance factory team bikes.

The 250cc class can be all about horsepower at times, but but even when he has been at a disadvantage in EMX races due to bike problems, Rick keeps moving forward despite the fact he is one of the bigger riders in the class. If we were on even footing power-wise, I have no doubt that he has the raw speed to compete at or near the front runners.

GateDrop: Is there any chance he’ll stay to race the last round at Hangtown as well?

Norman: If Rick finishes well at Fox Raceway, then yes, we will be going to the final at Hangtown, hopefully with some industry support.

GateDrop: Maybe now you’ve done this for Rick, you will come to a round of MXGP in Europe somewhere and see what MXGP is all about in the future?

Norman: I love MXGP and Rick has already agreed to host us when we come to Europe next year. MXGP was my first exposure to motocross when I was young, and I still love everything about it.

GateDrop: Anything else to add?

Norman: I am no one special,. I was just in a position to help a very talented young man try to live up to his potential, which I believe is largely untapped. If I can help Rick get more exposure so people around the world and in the industry can see how skilled he is, then that is more than enough satisfaction for me.

I would like give a big thank you to Jeremy and his staff at AEO Powersports and REP suspension in Murrieta CA – they have been so helpful with technical information and advice. I also want to thank Ricks team in Holland, TBS Conversions, for their assistance, and allowing him to bring his suspension and special hard parts to the States.

We basically put together an international privateer team to race a round of the US nationals without ever meeting in person in about three weeks with almost no outside help, I don’t know if that has ever been done before.