Interview: Antonio Cairoli on his last MXGP season, the Paris supercross and next season! 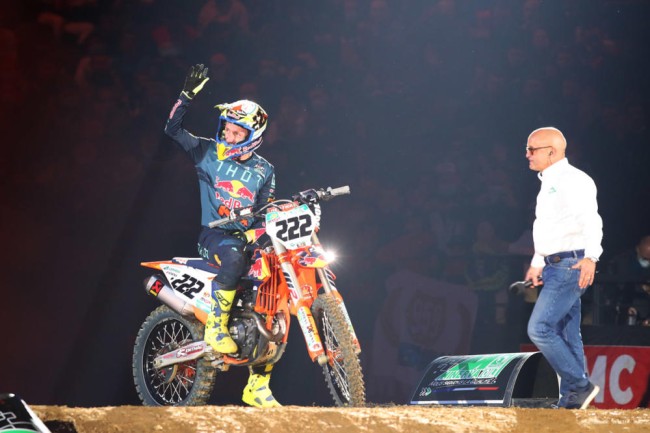 Antonio Cairoli had the last ride of his full-time professional career in a very different environment than he normally competes in – the Paris supercross! And the Italian legend, who is one of the greatest of all time – and maybe the greatest in some people’s eyes, showed that even at 36 years old he had the ability to adapt quickly to the indoor racing style to claim an impressive third place in the main event with a last turn pass on Justin Brayton!

Tony Cairoli, the Paris supercross, what brought you here? This isn’t your normal scenario!

Yeah, the last time I was in Paris was Bercy in 2010! I always like to do some every year but KTM were not always pumped when I do these kind of races. But now this year, I finally had the chance and I came. I was a little bit struggling in first practice because I didn’t really have the chance to ride much supercross but I really enjoy being here with the French fans.

This season was a bit of a rollercoaster for you, but for me your achievement to win Grand Prix still, to win the Motocross of Nations and to be in title contention, you must be really proud of your year aside from the crash that ended your title dream?

Yes, I am super proud of course but also a little disappointed because I had the chance of the title this year until Sardinia then the crash, it was one of the worst of my career, I was struggling. I missed the race there and some good points in the races after and the thing was over. But anyway, the MXoN was a good achievement this year and I still enjoy riding a lot so this is the most important thing.

How did you feel at the last MXGP round? Were you emotional that it was over or where you just enjoying the experience, the fans were all for you as well.

I just enjoyed everything. Mantova, it was good to have my last race in Italy and have the Italian fans around. It was amazing racing this year with the guys at a very, very fast level and also for the spectators it was a very, very good championship.

Is it enjoyable to be racing all those other four/five guys for the title? It looks so intense!

The level is so high and the evolution of the bikes makes the level more equal because the bikes are easier to ride than ever and the suspension is so much improved that everybody is going flat out. Also, one day of racing, it makes it more spectacular because everybody goes 100% all the time, with two days of racing the level is a little bit lower because you have a race on Saturday and you arrive at the second race on Sunday and not everybody is super fit so I think one day of racing makes it easier.

Jorge Prado, your teammate, I don’t how many times over the last two years you struggled to pass him and it almost thwarted your momentum when it looked like a podium or win was possible! Is it hard to stay relaxed whenever he is so difficult to pass?

His characteristic is this, he is hard to pass. Sometimes with me he made it harder than others, of course it is part of racing, he rides like that, very defensive all the time. But yeah, sometimes it gets dangerous we have seen a lot of risky moments and we have seen also in the crash with Jeffrey – that was one of them. I hope for him in the future he will get a title, he is part of our team, so hopefully he will be in title contention next year.

Just on Jeffrey, you had an intense rivalry when he came into the class although obviously still respect, but now it’s total respect from him to you, he called you the greatest of all time and I know you respect his ability as well.

I mean, Jeffrey for sure was the fastest this year no doubt on a lot of occasions and maybe without missing GPs he would have been one race in front at the end. I really appreciate his respect of course. I have been with everyone the same, respect everyone on and outside the track all the time.

You always seem to have so much enthusiasm like when you were a child riding the bike, how do you keep that going despite all the pressure of all the championships?

I just really enjoy riding, I just love riding my bike. I try to improve little things every time on things that I see from myself. Even at the end of my career, I still think I can improve in some parts but the main reason I stop is not because I’m tired or because I cannot handle the training and stuff, it’s because I’m a little bit over it mentally after so many years of being there and training on the highest level, this is the biggest reason I decide to stop.

Whenever you won your last Grand Prix a month ago, I guess I selfishly hoped you would do another (full MXGP) season because you were still so fast! But obviously you are quite happy to not do that and are happy with where you are now…

Yeah, yeah I am happy, really happy with the decision but like I said, I really still enjoy riding the bike.

And next year, AMA Nationals/some GPs? Do you know what the plan is?

I don’t know what the plan is but I would love to do some high level racing. Of course I will not be a professional anymore, I will take it easy and just do it for fun and discover a new situation with my family. Maybe on holiday to the US sometimes and if I have the chance to ride some Nationals, why not? I will take it.

You have had some many amazing rides over your career, I remember the Irish Grand Prix in MX2 and you caught Tommy Searle with broken front wheel! What is your favourite ride of your career, the Nations, GPs, is there anything that stands out?

There have been a lot of good races of course, but I think Arco 2017 was one of the nicest races I have ever done.

That was a pretty amazing last moto! You got quicker and quicker as the weekend went on, you must be really happy!

Yeah I was happy of course, I know I need to ride more on this kind of track to get the flow a little bit I was riding a little stiff of course in the beginning. The first sprint didn’t help of course with the crash and after I didn’t really get in the rhythm but then I was improving a little bit better and better all the time.

You made a couple of mistakes halfway through that main event with the rhythms but then you got your rhythm again and I think you were the fastest rider on the track at the end and a hard pass on Justin Brayton there on the last turn – you wanted that podium!

Yeah, I mean through the moto I felt better and better and then of course with the battle in front it helped, Cedric and Justin were battling a little bit and then the last corner there was a little bit if contact, I think he didn’t expect I was so close because in the rhythm before he messed up with Cedric and they touched a little bit and they slowed down a little so I could win some time then I just went to the inside and I think he didn’t expect the pass and he crashed.

I’m not happy when something like this happens because I don’t want nobody to crash but it was not really my fault he didn’t really see me and we came together but it’s part of racing, last corner, last lap, sometime your touch.

Do you enjoy this kind of racing?