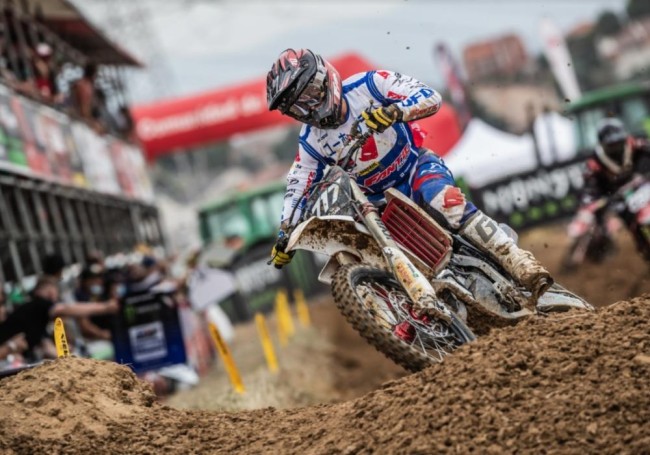 The Fantic Maddii Racing team have drafted in French talent, Alexis Fueri to contest the EMX125 series and Fueri who hasn’t got much EMX experience has already been running in the top ten of the competitive series.

We caught up with Fueri to discuss his opportunity and to get his thoughts on the EMX125 series.

My trainer and I got in touch with Marco Maddii when their 125cc rider Hakon Osterhagen got unfortunately injured, and he invited us to try the bike. I didn’t have much time to ride and do some testing with the bike before Germany.

Germany was indeed not so bad. I felt okay on the track but I had 2 bad starts and had to battle hard in both moto’s.  France was very disappointing, I had bad starts again along with bad luck. I crashed due to a mechanical issue while riding in the top eight but it was a very poor performance from myself.

A few riders who race in the EMX125 also ride in the French championship from time to time, so I know the riding level is very good in the EMX125 series. I didn’t start the championship because I didn’t have enough support to do all the races, but I work very hard and I know I can do better. The level is very high, and ten riders are able to get on the podium on a good day. The starts are so important in this class.

I’m going to ride the remaining EMX125 races with the FANTIC MADDII RACING TEAM. Absolutely. I’ll ride as good as I can and try to get a good opportunity for the 2022 EMX125 series. It’s unbelievable working with Corrado and Marco as they are such great people, and very worthy! They have a great work and training ethic, I totally trust them whatever they do and i’m so thankful to be part of the team. I want to thank them so much.

I want to thank the whole FANTIC MADDII TEAM for giving me this fantastic opportunity. It’s such an amazing experience. I also want to thank my parents for all they have done for me and my trainer and I thank you for this interview!