Interview: Adam Sterry on living in Holland and working with Marc de Reuver 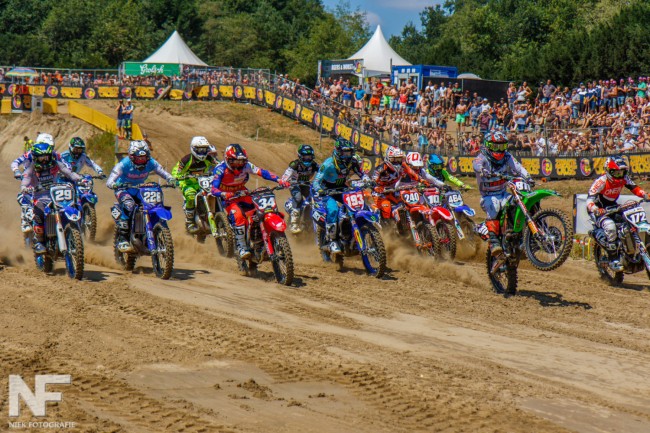 The start of the season didn’t go to plan for Adam Sterry but he’s revealed to us that he has been riding with an ankle injury that he kept re-injuring. In order to be at the front in the MX2 World Championship it’s pretty clear you have to be 100%.

However, the past few weeks there’s been changes for the Brit as not only has he moved to Holland but he’s also started to work with Marc de Reuver. The two oversea GP’s in Indonesia went well for Sterry and again he showed signs of improvement at the Zwarte Cross.

We caught up with Sterry to discuss his season so far, his move to Holland and working with Marc de Reuver.

Gatedrop: Adam, we’re here at the Zwarte Cross festival. Overall it was a pretty good weekend for you, you must be happy with the progress over the last few weeks?

Adam Sterry: I’m really happy with this weekend. I made a big step and we were on a new bike this weekend, it showed what that’s capable of. I got the holeshot yesterday, led every lap and managed to win the qualifying race. It’s been a while since I’ve been at the front and be able to lead laps. It was good for my confidence and everything, it proves I can still do it. I’m really happy with that. Today, it’s a shame about the first moto but crashes happen. I couldn’t get the bike started and it’s a tough track to pass, I was so far behind and I could only get back to twelfth. I still rode pretty good. In the second moto, I got third, I’d have liked a little more speed but I just didn’t have it at the track as it was today. I’m still happy, I’ll take that, we are working hard and I haven’t give in.

Gatedrop: When you say you were on a new bike, what do you mean by that? Was it not your GP race bike or where improvements made?

Adam Sterry: The team is always working on improving it and this weekend was a new spec. It was good, I was really happy with how it performed so hopefully I can take that to the GP’s now. One of my favourites rounds is this weekend in Loket, I always look forward to going there. Hopefully I can get two good starts and put two good results together.

Gatedrop: During the first fly away race in Indonesia, Marc de Reuver said it’d been two months since you put two good moto’s together. Why do you think that is? I don’t really understand why you crash so much because you’re a very smooth rider.

Adam Sterry: Yeah, normally I am but the level is that intense in the MX2 World Championship and if you don’t get the start it’s difficult. I was struggling a little bit and I’ve still got an ankle injury that I keep re-injuring every weekend. I had a problem with the heat at Matterley, this year since I done the ligaments in my finger before Argentina, it just feels like a rollercoaster, it’s been one thing after another. I haven’t made much progress and couldn’t ride during the week, going to the GP’s like that isn’t good for your mind. Everybody rides so fast now and I wasn’t able to get out at the start like I wanted too. Hopefully that’s all in the past now and I can keep getting good starts, getting good results, working hard and finish the year strongly.

Gatedrop: You’re obviously used to racing the British Championship, England hasn’t got anything like this with the festival and the motocross. What’s your thoughts on it? It’s a great event but I don’t think the track is up to a Dutch Masters championship…

Adam Sterry:  It’s cool that they come to this festival as the last round. The track isn’t the best, it’s always flat and it’s hard. This is the first year I’ve done the Dutch Championship and I’m really impressed with it. The way it’s put together, it’s always run smoothly, very professional and so many people come to watch because they invest so much money into it.

I would like to see the same in the British Championship because I went to watch one last year and compared to this, it’s nowhere near as good to be honest. It’s a shame because I’m from Britain, I’d love the British Championship to be the pinnacle of National Championships like it used to be back in the day. There just doesn’t seem to be that vibe about it anymore and GP riders don’t really want to race it. But that’s something else, that’s not my problem. The Dutch Championship is really good and this last round, it’s mega to be here and in the atmosphere. There’s so many spectators and you get a beer thrown on you when you’re on the sighting lap! You can hear the crowd so that’s pretty cool.

Gatedrop: A few weeks ago you decided to work with Marc de Revuer. Obviously Richard Mike Jones did a great job with you, he was the guy that made you a GP rider. But how does Marc compare to him and are you hoping he can be the guy to take you to the next level?

Adam Sterry: Obviously the start of this year didn’t go as we wanted it too. Yeah, Richard is still my manager and I call him one of my closest friends, we are still always in contact and we didn’t fall out or nothing. It was half his decision as well, we sat down and we talked about it. What’s best for my career right now is to be in Holland. That makes sense and to work with Marc, Richard is fine with that. I have a lot of respect for Rich, people don’t see how much behind the scenes how much he helps me. I will always respect him for him bringing me this far and to this point, we done it together. He started coaching when I went with him and now he’s the best coach in the UK and one of the best in Europe.

Compared to Marc, I don’t really like to compare. Obviously, Marc has more experience of racing at the top level of GP’s. There’s a few tricks here or there that he’s been able to bring to the table on race day. They both work completely different and I’ve been with Rich for so long. For my career at the moment we made a joint decision that it’s best for me and I’m happy to have a manger and a coach that was able to guide me in that way. He could have easily said he’d stay with me, then everyone from the UK still sees that I train with Rich but he didn’t do what’s best for him, he did what’s best for me and I really respect that.

Gatedrop: Ben Watson I suppose is a bit similar to yourself. At the start of the season he made the decision to leave the UK and now lives in Belgian, that’s made him a man. You’re now based in Holland, how’s everything going for you here?

Adam Sterry:  I mean it’s good, I don’t have my friends over here. It’s difficult for my girlfriend at the moment because she doesn’t come here either. It’s tough, in the Netherlands it’s just ride, eat, sleep and then repeat and train. It’s your job 24/7 and you don’t have any distractions. It’s tough but when you want to work towards your goal. At the end of the day it’s our job and you get paid to perform on the weekends, if this is what I have to do to do the best for me for the results then I’m willing to do it.

Gatedrop: You’ve one more year left in the MX2 World Championship. I’m guessing the plan for you is to end the season strongly and then have a really good season next year. If you’re not top five it will be tough to get an MXGP ride…

Adam Sterry:  I mean it’s even tough for really good MXGP riders at the moment even to get a ride. There seems to be less and less space and not enough rides for the amount of good riders progressing. Even after this year some riders have to go up and I just don’t see where they’re going to get a ride from. The plan is, like I said I wanted to be battling for podiums. There’s still a lot of races left and I still believe, I haven’t given up believing that I’m a podium guy and I can fight at the front. I’ve just been lacking the starts and a bit of bad luck with injuries. Hopefully that’s behind us now and I’m working with Marc. We will keep progressing and hopefully end the season strong. Next year I want to be fighting for podiums every weekend and fight for the championship.