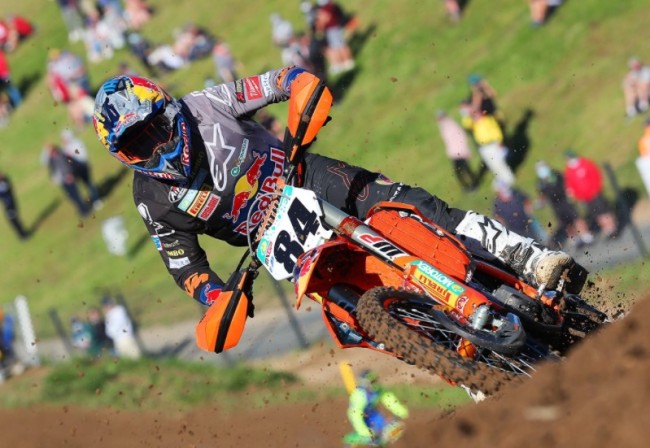 Ernée, a Grand Prix venue and former Motocross of Nations circuit, entertained the opening fixture of the French national series and the hard-packed and rough terrain welcomed a wide gathering of MXGP athletes eager for final laps ahead of the opening of the twice-delayed world championship campaign.

Herlings, steering his factory KTM 450 SX-F, took his second win in as many weekends (after success in the UK), with a 2-1 scorecard. The Dutchman barreled through from a mediocre start in the first moto but aced his launch in the second outing to beat Romain Febvre to the checkered flag.

Vialle used the KTM 250 SX-F to defeat countryman Thibault Benistant in both motos. The MX2 World Champion claimed a comfortable second race by almost seventeen seconds. Also active in MX2 was Vialle’s teammate Rene Hofer. The Austrian made a lively getaway in the first moto before collecting 4th place by the finish. Hofer would occupy the same slot in the overall classification after a small crash meant 5th position in the second race.

Meanwhile, in Italy, Tony Cairoli attempted his first meeting of 2021 by entering the fourth round of the domestic contest at Cavallara. The nine-times world champion set the fastest lap-time in qualification and won the first moto but decided against entering the second race. The Sicilian had sustained a cut to his right hand on Friday and elected against making the complaint any worse ahead of the inauguration of the 2021 FIM World Championship.

The Grand Prix of Russia at Orlyonok will drop the gate on the MXGP series on June 13th.

Jeffery Herlings: “I was fastest in qualifying by a good margin! I had a bad start in the first moto but came from mid-pack to be on the rear wheel of the winner by the end. I pulled a holeshot in the second and could lead, control and win it. My feeling was alright on the track. The bike was working well but I had a bit of arm-pump. Overall, some good work done for Russia.”

Tom Vialle: “A nice day. The track was good to ride and my results were decent. I was 1st in practice and then passed Rene in the first moto. I had a bit of arm-pump but this is pretty normal as it was my first race in almost six months! In the second I had the holeshot and won with pretty good lap-times. Today was fun and went well. I’m ready for the first GP.”

Rene Hofer: “It was a decent day. A huge track! I haven’t raced it for some time but there were a lot of lines and it turned out to be good preparation for the GPs. I took the holeshot in the first race and led for two laps until Tom passed me and then I could follow him quite well until I made a few mistakes that caused some arm-pump. I had a little crash in the second moto which left me in 5th and I finished with 4th overall. Not too bad and I was feeling quite comfortable in general. I cannot wait now to get to Russia and start the MX2 season.”

Tony Cairoli: “It was useful to ride today and make a race start and I felt good on the bike but the cut I have on my hand was not so good after the first moto. So, we made the decision not to enter the second race to make sure it heals well and fast for Russia, which of course is our priority. Anyway, Cavallara was good. The surface is similar to Russia so it was good preparation.”