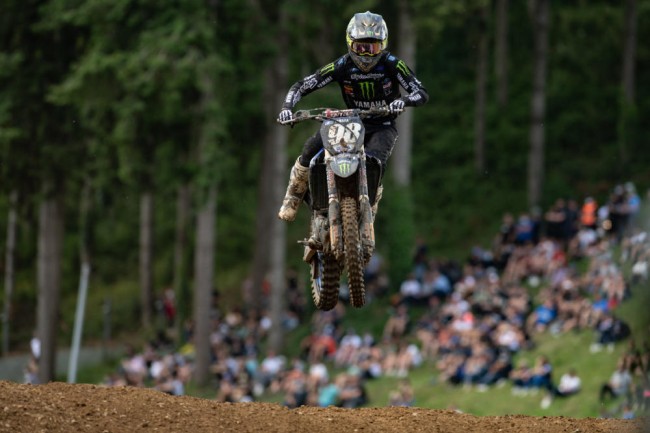 Thibault Benistant took a second place in the French championship in Ernée, on Sunday. The reigning EMX250 champion finished second in both MX2 races. Jago Geerts was only 12th (5+DNF).

Only two of the team’s three riders decided to travel to Ernée: Jago Geerts and Thibault Benistant. Maxime Renaux preferred a weekend off to be physically and mentally fresh for the start of the world championship in Russia, next week.

Bad starts
The Monster Energy Yamaha Factory duo didn’t get the best of starts in the first race. Benistant was tenth, Geerts almost last. The Belgian could only just avoid a crash when he touched with Langenfelder. Jago also suffered from arm pump which made it not easy for him to come through the pack. Meanwhile, Benistant moved up to fourth place, but wanted more. The Frenchman – racing in front of his home crowd – kept pushing and gained two more positions, finishing in second place. Geerts finally got into a good rhythm and finished fifth after a long catch-up race.

DNF Geerts
Benistant got off to a great start on his YZ250FM in the second race. Thibault was right behind his compatriot Vialle and fought for the lead during five laps. Geerts had another poor start (17th), but gained a lot of places in the first laps. On lap four he was already in sixth position. But then things went wrong. Geerts made a mistake and crashed. The vice world champion lost a lot of time and positions and decided to call it a day.
Benistant too, made a small crash. Luckily, he didn’t lose a place and finished second again.

“I had two terrible starts today, which made the job a lot harder. In the first race I was almost last and also suffered from arm pump. Nevertheless, I managed to come back to fifth place. Not bad at all. In the second race I came back to sixth place after another poor start. But then I made a silly mistake and crashed. I was way back behind and didn’t want to take more risks.”

“I’m pretty satisfied with my races today. I really felt good on the bike, the set-up was perfect. It was also nice to race in front of a crowd, even if it was a small crowd. It was a good last test in view of the world championship, which will start next weekend. I only regret that small crash in the second race, I would have liked to fight with Vialle until the end.”