Graeme Irwin interview – back on the dirt! 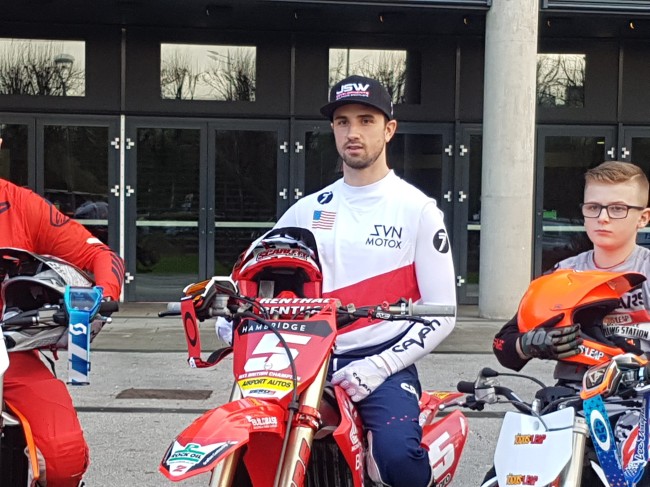 Graeme Irwin has had an impressive rookie season in the Short Circuits racing the highly competitive Superstock 1000 class in BSB, but the allure of racing a dirt bike again in front of his home crowd at the SSE Arena in Belfast has proved too good of an opportunity for the former British motocross and MXGP rider to turn down!

Irwin, still just 27, will even go to California to prepare for the one-off event but as we discovered, his focus is still on making a career on the circuits. we caught up with multi-talented and charismatic Irwin to get his thoughts on racing a motocross bike again and his first year as a short circuit rider.

You’re in your motocross gear again!

Yeah! Whenever you have the opportunity to race in the SSE Arena for Arenacross, you can’t turn it down. This time of year is quiet for us (short circuit riders). When I was on the phone to Matt (organiser) it was a no-brainer to get to race in an arena with 10,000 home fans! I have plenty of time, I haven’t ridden a bike much all this year so it is going to be an interesting six or seven weeks but I am really looking forward to the challenge. I’m looking forward to doing a bit of bar banging again, the road stuff there is a bit, but if someone touches somebody else it’s a bit of crying match! Whereas here everybody knows. especially in the head-to-heads, rubbing is racing!

You can’t do much practice on a road bike, is it nice to have something in the winter to give you more bike time even if it’s a motocross bike?

It’s a no brainer. This is my first off-season as a road racer and I probably would have started riding motocross over the winter anyway and with Arenacross I just thought, let’s do it! It’s a fun and exciting challenge. I have a mountain to climb to be honest but I have seven weeks so it should be fun.

A lot of people will know you now in road racing circles so you might be able to bring a few road guys to the dirt!

Are you riding the pro class?

Yeah I’m racing the pro class, I actually have my British championship winning bike here today and I was going to race that but I was talking to Dave Thorpe, (former world champion and Graeme’s team manager when he won the British championship) and he is going to supply me with a race bike for Arenacross.

On your first season as a road racer – how did you find it?

I’m really excited to go into my second year, the first year was such a big learning year. I believe I had some good results but on the other hand, me being a racer I wanted to do a lot better but when I take into consideration I was completely new to the sport and at British championship level. People say that having a motocross background helps, but it doesn’t mean it’s not difficult. For me I was happy to race at home towards the end of the season and to win was reassuring to me that I was going in the right direction.

In motocross terms if someone didn’t start doing the sport until February and then won a round of the Ulster or Irish championship people would be going, ‘ wow, that’s special.’ Hopefully I can keep progressing, next year no matter what option I take  I am going to have a really competitive bike. I will be in the same class, I think I need one more year there, don’t get me wrong everybody that knows be knows I would jump at the chance of a BSB ride but I want to have one more successful year in the Superstock 100 before I move on.

What are the biggest differences you found going from motocross to circuits?

Fitness is much easier om road racing, in motocross if you don’t prepare you struggle, everybody sees it. Circuit racing, I don’t know if it’s because I am used to digging so deep, you don’t have that (in circuit racing). But you have a lot of mental strain, with the precision and speed and how fast everything is coming. The concentration level, a laps in concentration can lead to a crash even if you brake a metre later than where you normally do. It’s not as if you can run wide and just pull back on, sometimes there is a gravel trap there so have to keep the thing turning and not tuck the front.

I’m enjoying it, I’m enjoying the transition and just enjoying racing. I’m enjoying this challenge of Arenacross and I am in a position where I can come and do this. Yes, I am coming out of retirement for motocross but I am still only 27 years old, it’s not like I’m mid 30s and thinking I can come back. Hopefully I can be at the sharp end, I am going to ride a Fona-Cab Honda so that will be really cool to do at home and they helped me a lot this year as well. 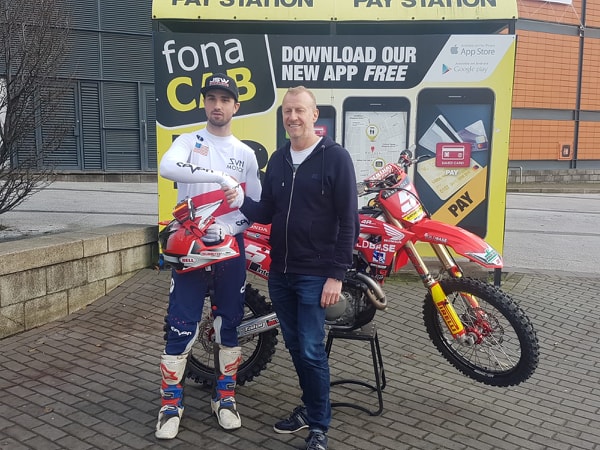 Do you ever miss racing motocross and want to show up at an Ulster championship on an off-weekend?

People say would you not come back and do a race? I feel like if I was to come back and do a race I always say it would take as long to prepare for a world championship as an Ulster and Irish. There is something in me, I know what it takes for preparation and the sacrifices, I would maybe come back and do Desertmartin British championship or the MX Nationals or maybe even a GP, that I feel would give me the motivation to go do the preparation but for me to string a season together in motocross, it’s just not possible with my wrist. I can’t lie and say I could just go and race a season because I couldn’t that’s not how it is for me anymore. I can do one-off events and it wouldn’t too strenuous on it, it would maybe hurt for a few days but it’s not a stress. but that grind every week, I couldn’t do it. I feel like I made the right decision, hand injury or not I was always going to make the switch.  I was going to do 2019, it was supposed to be my last year in motocross and I really wanted to have my second year in MXGP and win a British championship and go out like that. What I achieved in motocross is way higher than I even thought I would, I’ve won every championship in the UK, for me I can walk away with my head high and feel it was a success.

Do you find it weird not practicing? It gives you more time with your children and wife or is it frustrating because your learning curve takes longer?

I think my missus is ready to kill me! She’s probably like Graeme go and do something! I miss the training on the bike and the grind. Now my days are in the gym, I miss the days where you just rode and did a light spin after to recover. Now I have to push a lot hard off the bike but putting work in was never a problem of mine anyway but it’s just so different. It’s not just that I had to learn on the bike, I had to learn off the bike, off the track, how to make the best out of my body without riding for two weeks and being sharp. I do all my own thing, I have had a successful career in motocross going my own direction, so I feel i am the best in than situation.

Finally, there is always talk of the fastest Irwin with you Glenn, Andrew and Ross – the Arenacross would be a good chance settle that!

Could you imagine!  Glenn and Andrew have a small motocross background  but if you watch them on a motocross bike it scary, put them on an Arenacross track it would be death!  Ross (also now a successful short circuit rider) was probably, behind me, the best motocrosser. We were meant to do the fastest Irwin with the BBC and Stephen Watson and do a day at Bishopscourt or Kirkistown and then do a motocross day and maybe throw Jonathan Rea into the mix and look at lap times and see where we are at! It didn’t happen in the end with me braking my wrist but it is still something that could maybe happen in the future.