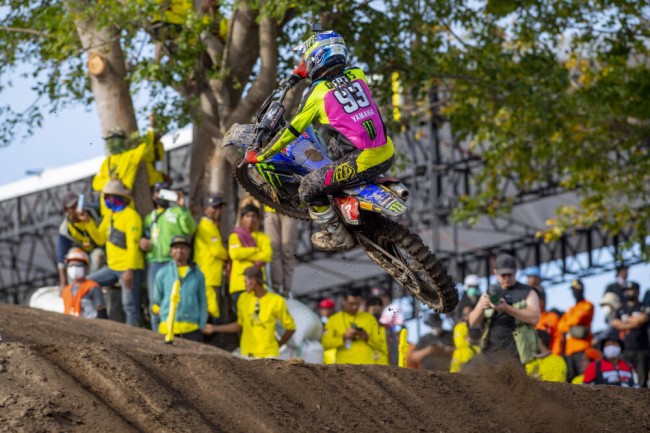 After a three year hiatus the FIM World Championship returned to Indonesia this weekend. After Palembang and Semarang in 2019 round 12 of this season took place at the brand-new Rocket Motor Circuit in Sumbawa, close to the sea. Geerts and Benistant finished second and third in the qualifying race on Saturday.

Bad starts
Both Monster Energy Yamaha Factory MX2 riders couldn’t convert their good gate pick into a great start. Geerts was 6th in the first turn, while Benistant was only 8th. Jago quickly moved up to third position after some nice passes. A little later, he capitalized on a mistake of De Wolf to take second place. Geerts closed the gap on Vialle, but halfway the race the Belgian made a small mistake and lost ground. Geerts tried to get back under the rear wheel of his French rival, but had to deal with a faltering rear brake and settled for second place. Meanwhile, Benistant was struggling to find his normal rhythm. Still, the former European champion managed to finish fourth.

Too many crashes
Benistant had a better start in race 2 and rounded the first turn in fourth place, with Geerts in sixth. Unfortunately, the Belgian had a collision with Horgmo in turn 3 and had to reemerge in 14th position. Jago quickly moved up to sixth place, but was a bit too fierce in his hunt for Karssemakers, which resulted in two small crashes. Yet, Geerts still managed to steal the fifth place from the Dutch rider. Meanwhile, Benistant sneaked down the inside of Adamo. By doing that, he secured a third place overall, just in front of his team mate Geerts.
The Belgian lost the red plate to Vialle, who won both races. Geerts is now 4 points down on his French rival. Benistant is currently seventh in the championship standings.

“Of course, it’s not nice to lose the red plate. But it could have been much worse. In the first moto I was right behind Vialle when I made a small mistake and lost ground. A little later I got problems with my rear brake. So, I had to settle for second place. Another mediocre start in race 2. In turn 3 I had a collision with Horgmo. He jumped too short, I just couldn’t avoid him. I was a bit too impatient to come back to the front and made two more small crashes. Fifth place was the maximum that I could get. After the race my wheel turned out to be badly damaged, so I was lucky to have reached the finish line. When back in Belgium I will definitely work on my starts. They have to be better.”

“I’m happy to be on the podium again. I didn’t feel good on this track the entire weekend. I had quite a good start in the first moto, but somebody took me out of the track in the second turn. I lost many positions and was struggling to find a good rhythm. After two riders crashed, I managed to come back to fourth place. My start was a bit better in the second moto. Halfway the race I could pass Adamo for third place. Just enough to get on the overall podium. Top 3 in a difficult weekend: that’s not bad at all. My third podium in row. I start to become consistent. I hope to continue this way. I want to take more podium finishes and wins.”