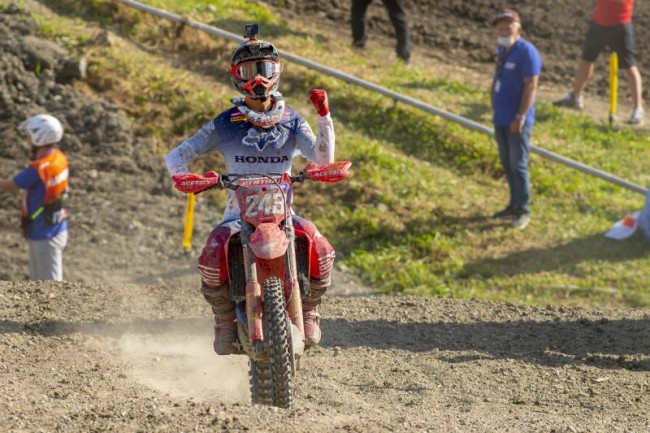 MXGP #1 Tim Gajser dominated the first of eighteen rounds in the 2021 MXGP series in Russia. He picked up the red plate as series leader after the opening race for the first time since his debut success in the class in 2016. The HRC rider went 1-1 at Orlyonok by winning from the front in the first moto and then coming through the pack convincingly in the second.

When asked if he thought his early superiority over the likes of Jeffrey Herlings, Romain Febvre, Tony Cairoli and Jorge Prado was slightly unexpected then the 24-year-old was modest, but also credited the preparation work and schedule performed by the factory team in the long build-up to the delated season start.

“Honestly, maybe a little bit yes but I knew I had a good winter behind me,” the Slovenian admitted exclusively. “We had made some improvements on the bike and I felt comfortable going to Orlyonok. The first race always gives more nerves. We all haven’t raced for such a long time and everyone had been training hard and was injury-free. I knew if I could ride like I do in training and like I did in the couple of pre-season races in Italy then I could be really fast…but not as much as I was! Maybe it was a bit surprising.”

“I couldn’t have wished for a better start,” he added. “It’s just about consistency now and to keep enjoying myself on the bike. When that happens, I can be really fast. To ride without pressure and to be myself. That’s it.”

Gajser was without the backing and presence of teammate Mitch Evans in Russia, who is still recovering from a wrist injury but is now into the second year of developme with thenew Honda CRF450RW and has been able to refine the championship-winning package even further. This process included detailed attention to the Showa suspension set-up.

“We got some stuff on the engine and chassis side to try but not as much as last year when we had a completely new bike and we had to work on everything and try everything,” Gajser revealed. “This time there was not so many items so I could really focus on suspension and the fork and the shock. We were testing quite a lot and we found some good things. In the past maybe I was afraid to change because I felt comfortable…but also that something was missing. We never had much time to really test properly but this year was different and we went really into it, especially in our sessions in Sardinia in February and March. It was a good step forward, even for me at this stage because the more suspension testing you do the more you understand it.”