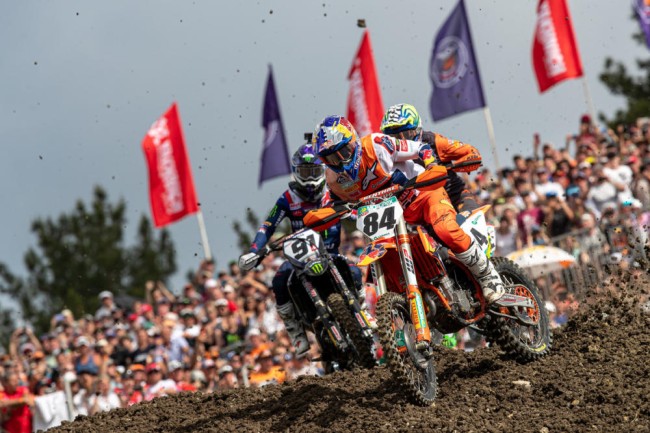 Red Bull KTM’s Jeffrey Herlings, the 2018 MXGP World Champion, finished as runner-up in last weekend’s Grand Prix of Russia and the opening round of the 2021 season. It was the Dutchman’s first MXGP race start since September 6th, 2020, and since he sustained a neck injury that ended the campaign while holding the red place as series leader.

Herlings had won pre-season events in the UK and France but rode to a 4-2 score at Orlyonok that include a small crash while fronting the second moto and being easily passed by world champion and GP winner Tim Gajser.

“My riding wasn’t good, wasn’t bad and it was an average GP for me but considering I haven’t raced for nine months or something like that I have to be pretty satisfied with the 2ndplace,” he said exclusively. “Tim was too fast and I hadnothing for him that day.”

The 26-year-old, who signed a three-year renewal of his contract with Red Bull KTM in 2020, insists his goal is longevity in 2021. Herlings constructed one of the most dominant championship victories in the modern era during 2018 with 17 wins from 19 GP appearances (finishing 2nd in the other two events) but two separate foot injuries and the 2020 crash in Italy have since cast him into a pace-setting but marginal character in MXGP title contention. Herlings wants to halt the swing between the extremes and achieve consistency. Accumulating race mileage is one of the key factors to reach that target.

“You need to get back to a routine,” he says. “It’s not only last year I missed but also the one before. I did 5 GPs in 2019 and only 6 in 2020 or something like that. I think a lot of people forget that. They just see how Tim was so fast in Russia and Herlings was off. But I know where I am coming from. I was close to eating milkshakes for the rest of my life in September. There have been a lot of injuries. This means I’m more than satisfied with a 2nd place in Russia, especially on a track that is slick and not as wide, open and grippy as other places. Being so far from home I was happy with that result and wasn’t going to take major risks.”

While recovering last year Herlings was able to have some of the metalwork removed that had been inserted into his right foot to correct the fractures from 2019. The material had been causing comfort and flexibility issues for the #84 during 2020. He now insists his physical shape is “the best I’ve been in the last three years.”

“I’m more or less healthy,” he added. “My foot injury will never be 100% but it is way-better than it was in 2019. So that’s a big improvement. I’m not on the level today like I was in 2018 but It really helps that my foot isn’t painful every single day.”