Febvre on a decent day at Alghero while Monticelli shows speed 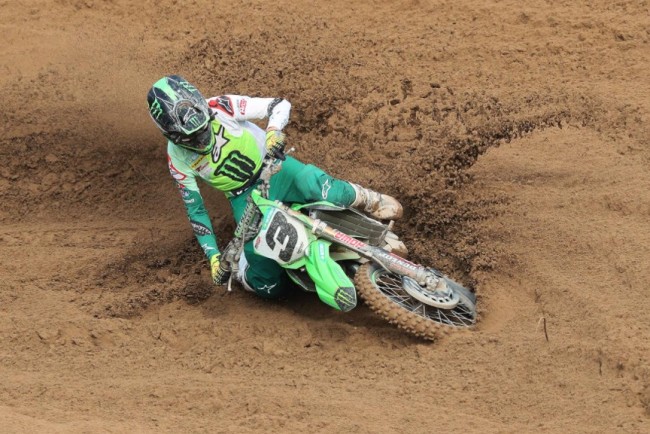 Romain Febvre of the Monster Energy Kawasaki Racing Team goes to the finale of the Italian Open Championship next Sunday as joint-series-leader after finishing runner-up at Alghero in Sardinia.

Febvre had completed a 1-2 for KRT behind Italian colleague Ivo Monticelli during morning qualification but hit the gate at the start of the MX1 race; he soon reached sixth in a fast-moving train around the compact serpentine track but, with overtaking risky, the Frenchman was content to hold station before advancing to fifth mid-moto. Monticelli held a challenging second place for many laps before settling for fourth rather than risk a crash as he felt the effects of arm pump from half-distance; the Italian was completely out-of-luck in the SuperFinal as he fell three times to take the chequered flag eighteenth. Meanwhile Febvre had taken the holeshot to lead by four seconds at the completion of the opening lap and move further clear at the rate of two seconds a lap throughout the early stages before a slip on lap four cost him much of his advantage. Quickly recovering his composure, he once again eased clear of his chasers but a recurrence of arm pump eventually let the Dane Olsen take over the lead five minutes from the end of the race as the duo got caught up with lapped riders. Febvre displayed his determination through the closing stages to enter the final lap less than a second behind but there was no way past on the narrow track and the duo now go to the final round of the series at Mantova on the Italian mainland tied on points with a winner-takes-all situation for the series title.

Romain Febvre: “It was a decent weekend with a good second position during the timed practice period behind Ivo. But at the start the gate twitched twice so I hit it and didn’t start well. I had some good early laps to come back to sixth even though it was difficult to overtake on this small track; later in the race I struggled a little with my forearms but I finished fifth. In the SuperFinal I knew what to expect with the gate and I got the holeshot; I was riding really fast at the start of the race and made a gap to my rivals before I made a mistake and crashed trying to jump the holes in a braking zone. I was still leading after this crash but my forearms started to hurt again and Kjer Olsen passed me while we were amongst the lappers; I stayed with him until the finish without being able to make a pass. There are good things to take away from the weekend, whether it be the starts or our speed in the race; now we just need to solve the forearm problems.”

Ivo Monticelli: “The day started well with pole position; I was feeling good with the bike and track. I started second to Coldenhoff in MX1 and I felt comfortable following him to halfway through the moto until I started to suffer arm pump so I had to slow my rhythm; I finished fourth but it was good to have stayed second for so long. I started good again in the SuperFinal in third but I made a small crash on the first lap. My bike was in the middle of the track so I had to wait until everyone had passed before I could carry on; I was already mid-pack by the third lap but I made a slow crash and had to do it all again. I found a good rhythm but unfortunately I crashed again on the last lap and the bike was stuck in the track panels so I finished eighteenth. The positive is that I showed my speed and was already feeling better than last week with my condition. The team was again working great and I want to say a big thank you; I look forward to two good races at Mantova next weekend with less mistakes.”