Geerts on a tough day in Italy 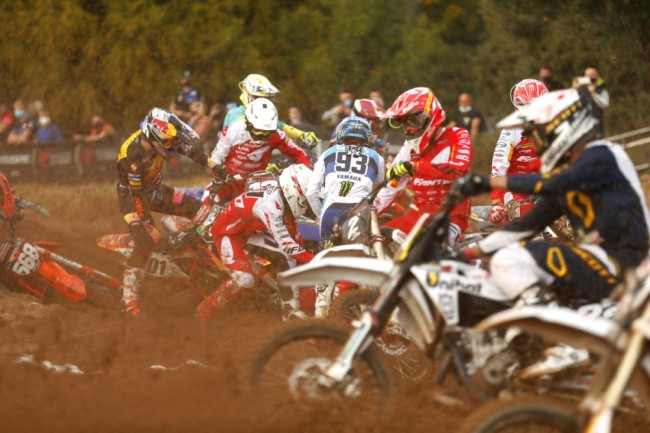 Twice he was brought down in the first turn. Just as many times, Monster Energy Yamaha Factory rider Jago Geerts impressed with his catch-up race in Alghero, where the second round of the Italian championship was held.

Geerts was the sole Monster Energy Factory Yamaha MX2 rider in Alghero. Thibault Benistant is still recovering from a broken collarbone. Normally, the Frenchman will be back on the bike mid-March. His compatriot, Maxime Renaux, dislocated his shoulder last Sunday during the time practice in Riola Sardo. Luckily, no surgery is needed. Renaux is now facing five weeks of rehabilitation.

Bowling
The start of the MX2 race was more like a game of bowling with a lot of pins falling over. Almost ten riders went down in the first turn. Jago Geerts was one of them. It took some time before the Belgian could resume his race. He started his catch-up race in 38th position. After 25 minutes of hard work Geerts finished in sixth place.

Same story in the Superfinal, against the MXGP riders on their powerful 450cc bikes. Geerts got a blistering start on his YZ250FM (he was third in the first turn) but was knocked over again by another rider. The Belgian was buriedd under the bike of one of his rivals and lost a lot of time to get on his Yamaha again. Geerts restarted in 40th position, but quickly found a good rhythm. Lap after lap, he moved up a few places to finally finish in 10th position.

“A short start and a sharp turn: that’s asking for trouble”, said team manager Marnicq Bervoets. “Geerts was a victim twice, without being able to do anything about it. He showed a lot of determination in his catch-up races. A strong performance. And most importantly: he didn’t get injured in those crashes.”

Geerts: “Two crashes in the start. Twice completely beyond my control. That’s very annoying. Fortunately, I didn’t get injured. I’m pretty happy with my riding today. I had a good feeling on the bike, it was a good practice. The results are not important at all at this moment. I will not race in Mantova next week. It’s not sure yet when the FIM World Championship will start. That makes it very difficult to have a good preparation. I’m going to take it a bit easier again now. It’s important to maintain my fitness. Nothing more, nothing less.”