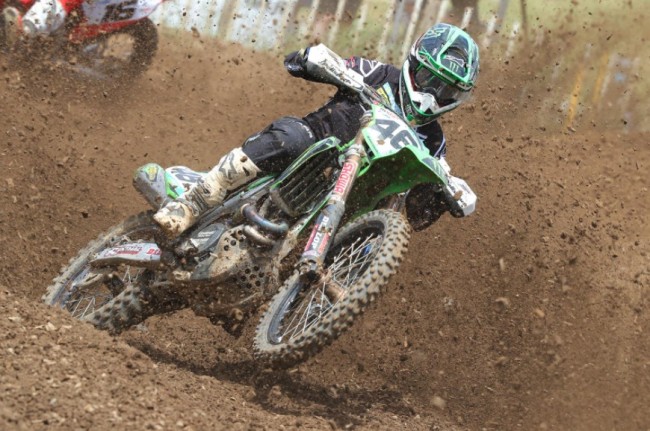 Monster Energy Kawasaki Racing Team’s Romain Febvre set the fastest lap in each moto of the final shakedown race before the FIM World Motocross Championship takes off in Russia next weekend.

The opening round of the French Championship at Ernée attracted a truly world-class entry as many GP teams and riders took the opportunity to complete their final preparations before the 2021 GP premiere; indeed this was the first racing opportunity for the Kawasaki Racing Team since their success at the Italian International Championship more than three months ago but they immediately gave evidence of their meticulous preparation during testing as Febvre topped his qualification group with teammate Ivo Monticelli third. Clear skies greeted the teams on race day after heavy rain during the week had created excellent traction to complement the impressive track preparation by the organisers. Wheelspin at the gate cost Febvre a top-six start in the first race but he was soon on the charge and, setting the fastest laps of the race, was established in third by lap four and confirmed his speed over a full race distance by closing down the front two in the final minutes. An impressive second-placed start in race two saw the Kawasaki rider, who again set the fastest lap, pressure the leader to the finish as they outdistanced the chasers by no less than thirty-six seconds; his 3-2 moto placing’s secured third overall on the day.

Romain Febvre: “I’m happy with this weekend; we had good weather and a very nice track. That’s why we came here; we knew that the track would be very well prepared! In the first race I spun at the gate, came back sixth, then third, but was still making a few mistakes. However I had good speed racing together with Herlings and came back close to the leader. My second start was much better in second position behind Jeffrey and we were close all race with the gap always between one and two seconds; I was close but I never had the possibility to pass him even if there were many lines on the track. I’m ready for the GP season; I’m not afraid to say that I have never been so well-prepared. It was a long winter but we did a good job with the team; the bike is really good and mentally I feel confident. I showed again today that I have a good speed and a good rhythm. “

Ivo Monticelli again showed the advances he has made since joining KRT; the Italian held a strong fifth in the first race before arm pump, the inevitable result of the long pause from racing, cost him two places during the final two laps but he confirmed his pace in race two as he joined his teammate in the top three before surrendering two places during the second half of the moto after a rock damaged the front brake. He was fifth overall on the day.

Ivo Monticelli: “It was good to be back racing; it had been like another winter as it was more than three months since our three races at the start of the year in Italy. Today was almost a mini-GP so it was nice to see where we are and I had two good starts. The first moto I got really bad arm pump at the end after not racing for so long but the speed was already there. I could pass Seewer for third in the second race but I took a stone on the front brake and had to take care during the second half. Romain and Jeffrey are another level, but we could see that I can stay close to the top five; the work we did this winter is already paying off. You never know where you are until you get to race with the others; now I look forward to showing my speed with a good result in Russia next week. “

Mathys Boisrame also finished on the podium for the F&H Kawasaki Racing Team in the MX2 class, taking the chequered flag third in each moto after topping his qualification group during the morning. Racing determinably from a fifth-placed start in the first half-hour race, the stylish French rider had advanced onto the rear wheel of the race leader – the current world champion – by half-distance and was looking for a decisive pass until the front wheel slipped out in a rugged turn with ten minutes remaining. Rejoining the race ten seconds behind third, he pulled back the deficit to the podium at two seconds a lap to eventually finish in the wheel tracks of second. A hectic opening turn saw Boisrame way down in thirteenth at the end of the opening lap in race two but the F&H teamster had already advanced into the top five by lap three and two laps later secured third position, albeit ten seconds down on the leaders. Setting the fastest laps of the race by a full second he relentlessly closed the gap to again cross the line just short of second for his second third-placed moto finish of the day and third overall on the day to head with confidence to next weekend’s GP opener.

Mathys Boisrame: “I had a good feeling on this nice track and I already had a good result in the timed practice period. The first race was not that easy. My start was not so good but I came back to second; then I made a mistake and crashed back to fourth but I finished third with good lap times and good lines. In the second moto I was nearly last at the start but I came back to third again so in the end it was a good result for me.”

F&H teammate Mikkel Haarup, headed only by the current world champion in his qualification group, showed determination to convert midfield starts into a brace of ninth-placed finishes whilst Bud Racing’s Quentin Prugnières, just turned sixteen and making his debut in the senior national championship, recorded an impressive eighth place against the GP opposition in the opening moto.

Mikkel Haarup: “I had a great qualifying with P2 and my pace was very good all day but I had a bad start both motos. I made a few mistake too in traffic but I rode well to come through to ninth each time. My speed was good but we have to work on my starts before Russia; once that is sorted I can be right up there. “