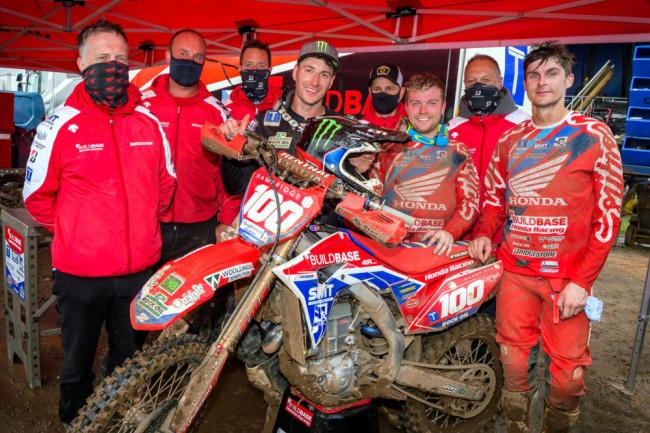 It has been a strange season for British motocross in 2020 with no British Championship but thankfully the MX Nationals did run with a four-round championship and it was David Thorpe’s Buildbase Honda rider, Tommy Searle, that came out on top.

However, one of the best teams in the British paddock still lost their long-held sponsor Buildbase at the end of the year. Fortunately for the team Crendon have come on board for 2021 with three-time world champions, Thorpe, running a strong team once more with Tommy Searle and Jake Nicholls back again plus youngster Jay Hague in MX2.

In part one we caught up with David to discuss the team changes, British championship promoter changes, as well as get his view on Tim Gajser’s world title win in MXGP plus the new generation Honda for 2021.

You have new sponsor for this year, was that stressful or was this all planned despite the coronavirus?

Well actually, Buildbase told me last December that it would be our last year. So, I have had plenty of time to think about it and to work through it. The MD of Crendon was the MD at Buildbase when we began the relationship with Buildbase. He left Buildbase after three years and then he started up his new company so we have always kept in contact through that period.

You have kept Tommy and Jake and added Jay Hague, and Jay has shown a bit of potential the last couple of seasons – what was the key thing that got him on the team?

As with all the teams we were suffering a little bit with budgets across the board. Whilst Steven Clarke rode amazing for us this year and did a fantastic job, we probably didn’t have the budget to run Steven. So we looked to potentially doing something with a younger rider. Through different reasons Jay has had some great results and then has had some DNFs so when you start looking through everything you realize that at the heart of it there is a good bit of pace there. I think it was the right thing for us to do some stuff with a younger rider and see if we can bring him on.

Tommy won the championship for you last year and although it was a shortened season, he seems to know what he has to do when he has to do it. He wins when he can and is happy to take a third, so he was a bit of a brainer to keep on this year?

Yeah, Tommy and Jake both have got an amazing bit of pace still. But you don’t get to 30 years of age and not have the experience of when to twist the throttle and when to just accept a third when you are chasing the championship. And I think this year highlighted it when the championship was condensed and there wasn’t really any scope at all for anybody to get injured and still fight for a championship. I think that was also very much on both of their minds racing the MX Nationals.

Jake has been so close to the British championship but injuries seem to get in his way. He always seems to be able to recover from the injuries and get back to his pace but what do you feel he needs to do to get over the line and get that championship?

The year he was destined to do it he broke his leg at that centre meeting I think that is just one of those things. People don’t realize what a big injury that was for Jake and to come back from that injury to be riding like he was this season, at the first MX National at Hawkstone he was outstanding, I think he has done really well. I don’t think you can look at any rhyme or reason why he hasn’t won a British championship or you can totally put it down to injury. Racing is racing, as an ex-rider and those guys as riders you just take it on the chin as that’s how it is, you don’t think about getting injured you just think about getting the results.

You have a new bike for 2021, I believe you have ridden it as well how does it feel from your perspective? Does it mean you don’t have that development because it is such a good product or have you started work on getting the guys comfortable on it?

First and foremost, it’s always difficult when we knew there was a new bike coming, we obviously saw Tim riding it in the Grand Prix. You look at the bike we had and in our eyes that chassis and bike combination was the best bike we have ever had in this building. When you see a new bike on the horizon, you do question yourself, ‘how can they make it better?’ But the reality is they have the latest chassis with the new engine configuration, I think it’s exceptional. It never ceases to amaze me how they can improve on something that is already very, very good, they’ve done it. They’ve ticked all the boxes they needed too.

For us as a team, Ryan has been developing the engine on our dyno because generally Tommy and Jake have slightly different configurations on their engines, they look for a different part of power at a different rpm. So, Ryan has been very busy doing that and we are in a position now where we are just going to start to do some testing. We have pushed back testing, not because of Covid, but the championships don’t start for us now until April which I think is significant whereas normally we would be riding all the way through December. Now we are looking to start at some point in January, Jake has just taken delivery of his bike and Tommy will take delivery of his in the new year, as will Jay, his bike is all good and ready to go.

How does it compare to riding one of your factory bikes in the 80s?

My memory is not that good really – that’s over 30 years ago now! It’s quite strange because I rode it at Mantova and I didn’t particularly like Mantova as a track 30 years ago I’m not going to like it at 58! But I enjoyed riding the bike but as for a comparison to the old days, I just can’t really remember – I would be blagging it if I said I did!

What are your thoughts on the new promoters of the British championship and where it can go?

Well, I was always a big advocate of Gareth Hockey taking on the series. I felt the time had come for it to be put to tender if you like. Gareth has been around the beach race, schoolboy racing, all sort of racing for many years and he has got a good group of people behind him to make it work.

I was really pleased the ACU had gone down that road, and you see now there is a new sponsor on-board with Revo which I think is fantastic. Whilst they run a rival team to us, the fact they are a big company and putting money back into the sport I think is really good. We need money back in the sport to try and get it to grow, to try and get it where we all feel quite comfortable to sell it to our sponsors. So, I am very optimistic that the British championship will start to climb out of where we were and then maybe it will give the riders and team more opportunity to get more sponsorship from outside the sport.

The idea of having it on the internet are forward thinking idea. I’ve seen the calendar and it’s a pretty good calendar, maybe a little bit disappointed we didn’t go to a few new tracks but I understand their restrictions, it’s not quite as straight forward as that. Maybe in the future we will get to some different tracks because I think otherwise the riders and the teams and the fans get a little bit stale but it going in the right direction and I think if all the teams get right behind it the British championship should get back to being the best championship in Europe.

On Tim Gajser, he is now a four-time world champion and three-times in the premier class. He is Honda’s main guy in this era like you were in the 80s. What are your thoughts on him and his performance, he was a wee bit up and down but when it mattered, he pulled it all together and started getting the wins to win the championship.

I think for the world championship guys it was difficult having a condensed series. It would have have seemed really strange riding on the same track as well over seven days. Tim is a modern-day athlete, he is super fit, his speed is second to none, he is never scared to twist the throttle and he is still of an age where he bounces well! And people forget, he has an awful lot of pressure, because while the Australian rider Evans is a second rider to him, they are not currently looking to him to currently win Grand Prix and championships.

So, Tim is the focal point of winning that championship and with that, as I know, comes a lot of pressure. He does remarkably well to do what he does and not have all that weight on his shoulders, he just doesn’t seem to let it worry him. If you look at Yamaha you would say they have two or three number ones, if you look at KTM they definitely have two number ones but Honda really do hang their coat on Tim to win the championship, so there is a lot of pressure there.