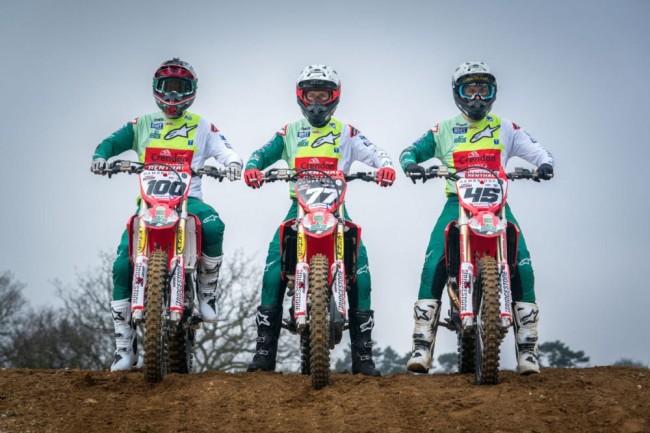 The Crendon Fastrack Honda squad of Tommy Searle, Jake Nicholls and Jay Hague finally managed to get together for a day of testing and riding on their new-look 2021 Honda CRFs this week.

Riding on a private track, the trio are now making final set-up changes to their machines in the run up to the start of the UK’s two highest-level series, the British championship and MX Nationals.

British champion Tommy Searle and Jake Nicholls have both conducted extensive engine and suspension testing on their 2021 Honda CRF450R machines and both claim the bikes are a big improvement on the 2020 models.

And the team’s newcomer in the MX2 class, Jay Hague, praises the 2021 Honda CRF250R, saying its handling is incredible which really gives him a confidence boost.

Crendon Fastrack Honda squad team manager, triple world 500 champion Dave Thorpe, said: “It’s a fantastic opportunity to get all three riders together for a photo shoot and some further testing as we head towards the start of the season. The bikes are truly impressive, the riders and mechanics are working well together and we are improving things all the time. We can’t wait for racing to start – whenever that might be.”