Cianciarulo: I didn’t have the raw speed 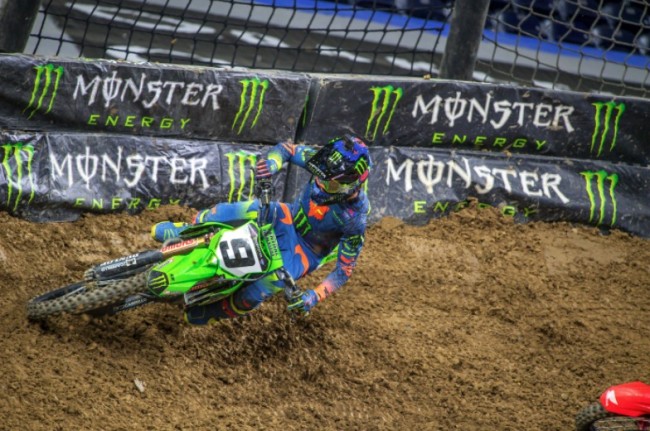 Adam Cianciarulo spoke about a decent start to his season at H1 in the press conference but admitted he is still struggling with his arm after getting surgery to relieve a trapped nerve at his elbow in the off-season.

“Initially I was okay in free practice, I felt pretty good, but I was a little bit uncomfortable when the track got worn in like the deeper ruts in the turns, the bumpier ruts in some of the transitions were just throwing me off a little bit”.

“I haven’t had a chance to race those tighter East coast style tracks yet on the bigger bike so just adjusting to the track being extremely tight. I was trying hard, I was doing my best obviously just didn’t have it. I think I steadily improved throughout the night I put myself in a good position in the heat race and in the main event”.

“Obviously I didn’t have the raw speed to run with the top two guys but sometimes that’s just the way it goes and I think on a night where I didn’t feel my best and maybe didn’t gel with the track and a couple of other things, I’m pretty happy with a fourth. It was kind of an uneventful, quiet night which I don’t have many of those but ill take it.”

“I definitely think I would be stronger if I was able to put more weeks together in off-season but I feel stronger than i was last year, still. Physically at the end of the race I felt strong. Yes, the arm is still a problem for me the more bumpy the track is, like in the ruts in the middle of the turns, that type of spot is really difficult for me, so I was just trying to avoid the ruts with the big bumps in them. It is what it is I felt pretty strong, I wish I was able to be a little stronger with my arm, but everybody is kind of dealing with something.

“Right at my elbow my ulnar nerve, they call it ulnar nerve entrapment, so that was my problem with losing grip strength the past year and a half or so so when he relieved the stuff that was blocking the nerve he said basically the signals your brain sends to that nerve was being blocked because it was entrapped there at the elbow for so long. So now that he has relieved the pressure on the nerve, all those muscles that haven’t been receiving signals from the brain, it takes them a while to wake up and get going, he says after two or three months I should start to feel pretty normal. I have felt it getting better so I am definitely encouraged by that, I think it’s just about managing it the best i can at this point. It’s not like I am incapacitated out there and about to fall off, but it’s definitely not ideal.”

“For H2 I think it’s just about adjusting your technique and adjusting your tendencies for the track. I think just watch some footage of the top two – Barcia and Ken rode great, so just study some film and rely on my team with some info with the bike. I don’t think we need to make some drastic changes maybe a little bit more rolling speed in the turns.”