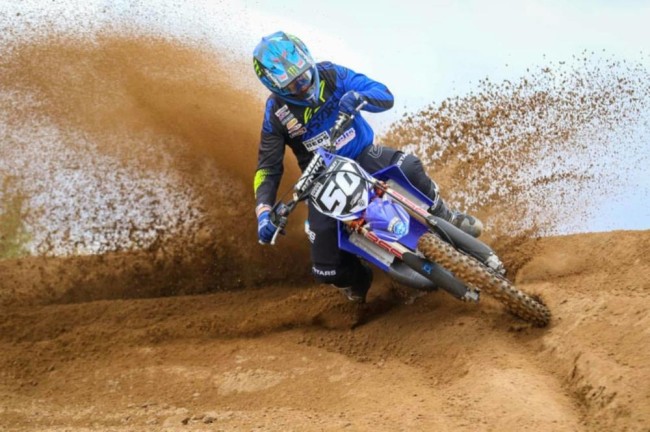 The Motocross Des Nations is heading to Mantova this weekend and not only will Team Ireland be competing but an Irish rider will also be competing in the bLU cRU FIM Europe Cup which is a series put together to help them for the future and potentially secure a ride in the GP paddock in the future.

Charley Irwin who has been racing in Scotland as well as at home this year has got an entry and will be racing during the same weekend as some of the best riders in the world.

We caught up with him ahead of the weekend – it was all very last minute!

“I was entered at the start of the year because I am competing in the Scottish championship on the Yamaha, I have been first place on the Yamaha 125cc at every round. They selected 97 riders out of 300 I was one of them but unfortunately I didn’t receive an email or confirmation to let me know until Stuart Flockhart messaged my dad on Tuesday morning”, Irwin told GateDrop.com.

“It was very last minute, it’s a 24 hour trip and I had nothing in place; license, boat, entry, Covid tests etc. But it was too good of an opportunity to miss. We can’t wait to ride the same track as the likes off Glenn Coldenhoff, Liam Everts and be part of one of the biggest weekends in motocross”.

I’m just going to give it my best shot and hopefully do everyone proud. I would just like to thank my mum and dad, Russell’s motorcycles, Phillip McCoullough, Stuart Flockhart and everyone else that has helped get me here”, concluded Irwin.