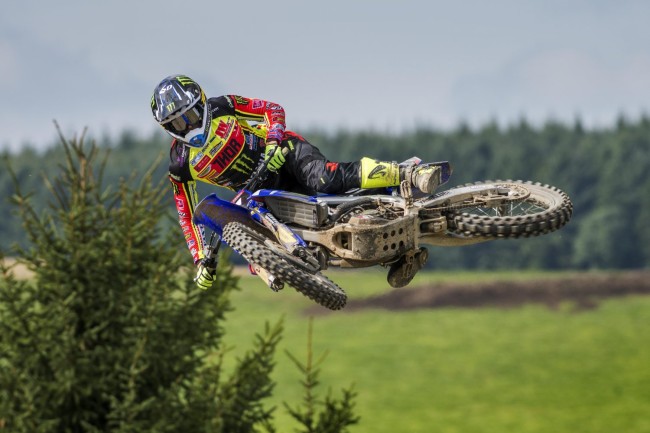 The Belgian has shown flashes of brilliance in the last two years but has always had his momentum interrupted by injury, thwarting a true championship reflection of his speed when he is on top form.

Now, having parted ways with Kemea Yamaha after three seasons, Brent will join the 8Biano Husqvarna outfit for 2018 and hopes he will have anew lease of life and put the injuries behind him after two tough seasons.

We caught up with an honest and frank Van Doninck to talk bout his season and 2018.

Gatedrop: Brent, it’s now official that you’ve signed with the 8biano Husqvarna team for the 2018 season. How did the deal come about and you must be happy to secure your future!

I really wanted to ride on a Husqvarna or KTM next year, one day the team called me and it looked really interested so than we started to negotiate and we came to a really good agreement at the end.

Gatedrop: Obviously with Suzuki and Kawasaki pulling out of MX2 things aren’t great, did you have many options for 2018?

Because of Suzuki, Kawasaki and HSF stopped the team it was a little bit chaos in the MX2 paddock. I had a few options for 2018 but all the factory teams were full but I’m really happy with what came out !

Gatedrop: You’ve spent a lot of time with the Kemea Yamaha team, was it a tough decision to leave them?

For sure it was not easy to leave because I have been in the team for 3 years but the last half year it didn’t work anymore like it used to do. I’m just really happy to have a new start in a other team.

Gatedrop: At Kemea you worked with Marnicq Bervoets and Jacky Vimond, how was it working with them and what sort of things did you learn from them?

For sure I learned some good things from Jacky that I will use in the future. Marnicq was the manager so we didn’t really see him on practice or whatever.

Gatedrop: Since moving up to the MX2 World Championship you always seem to pick up injuries! Mentally that must be difficult to come back from but when you’re fit you always show some good speed..

It was tough to deal with the injuries for sure. I learned a lot from it even when it was not always my fault. I always came back too soon after a injury and that;s wrong. In the future I will take more time to get 100% fit again.

Gatedrop: Your a pretty big guy, do you feel that holds you back a bit on the 250cc or for you is that not a problem?

I’m not a lightweight for sure but it’s not bothering me. I like to ride the 450 but first I will finish my next 2 seasons in the mx2.

Gatedrop: In Belgium, Motocross doesn’t seem as big as it used to be anymore with less racing and there’s not so much talent coming up from there anymore compared to Holland and France etc. What would you put that down too and is it worrying for the future?

Motocross isn’t popular in politics. we are losing a lot of tracks and we don’t get any money almost to help and train the kids. So it doesn’t look good for the future.

Gatedrop: How would you describe your 2017 season?

2017 could be a lot better. It started of pretty good and after 6 races I was 6th in the standings. Than I got a lot of bike problems and of course my big crash in Russia. I tore some ligaments in my wrist from that crash and I had surgery 3 weeks ago because of that, so it was a very tough season mentally. I will also change my training program for next year. I have the feeling that I was riding my bike too much in 017.

Gatedrop: What are your goals for the 2018 season?

Gatedrop: Who do you see being the main guys in the MX2 World Championship next year?

For sure Jonass, Prado, Covington, Lawrence and Olson will be very strong again.