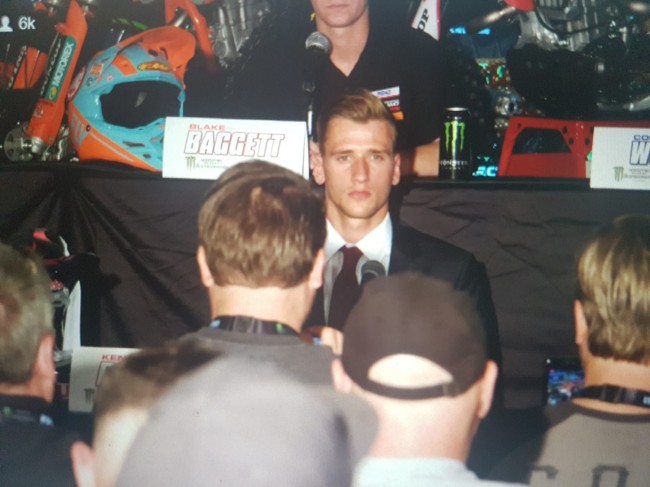 Roczen: There is certain restrictions the more you ride it the more you get used to it. When I go off my mental state I don’t feel I have anything worse than anyone else out here.

I’ve never been off racing for a year, I am super luck and happy to be here and line up on the gate again. Whether it’s win a third a fifth it doesn’t really matter to me it’s just the first round of 17 and I’m ready to have fun out here. Other people don’t know, what they don’t see is the work I have put in, I know what I am capable of and my team around me.

If it was fragile and I could barely do a push-up I feel like I wouldn’t sit up here, the team and Dr Rioja did an amazing job. It’s never going to be the same but in my eyes it has good strength to ride with it. I’m trying to be precise, not just send, it’s become normal to me. I am able to ride and able to go fast.

I think it’s tough to come back straight into racing and expect to win (A1)I want to be smart and get race time under my belt.Sometimes the odds are not in your favour but if you try mentally and physically, I want to try everything to come back, there wasn’t really any doubt I could come back and here I am.

Musquin: I’m feeling really good. Winning the MEC was amazing. We had a great boot camp training with the guys. I think everyone saw Ryan was so consistent maybe the consistent ever, his bad days he was top 3 or top 5, that’s what I learned from him, now I am in his position to be the guys at KTM. I just want to give my best and win, I train really hard all the time to be the best. I like to do those overseas races, I love to travel to Europe and that’s the only time I can do it.

Tomac: Last year was tough those 4 or 5 points you look back on it and think why did I lose it. This year is abaout minimising mistakes, it’s easy to say but a lot harder to do, that’s the goal at this point. We have had a really good November and December but the end goal is to go after that title. Looking back it sucks, if we had the points system last year( Tomac would have won) but the past is the past.

Anderson: Husqvarna got a new bike so I thought I would stay out in California and help develop that. I think we are ready to do battle.

Webb: I’ve hopefully learned from my mistakes last year and do good this year. I feel like the 2018 450 suits my style a lot better. I’m excited to line up and see where we stand. There is a new motivation in me to want to really do well and humble some people up.

Reed: 16 years in the US doing this. I have that same drive to get out and do this against the best dudes in the world. I have maybe rode the bike three or four times. I’m not fit and I’m overweight but I am ready to have some fun and race my dirt bike. One of my priorities is to be the oldest race winner, I think Larocco has that right now and he also has the most starts, I think I will crush his starts record and hope to do the same with the oldest winner.