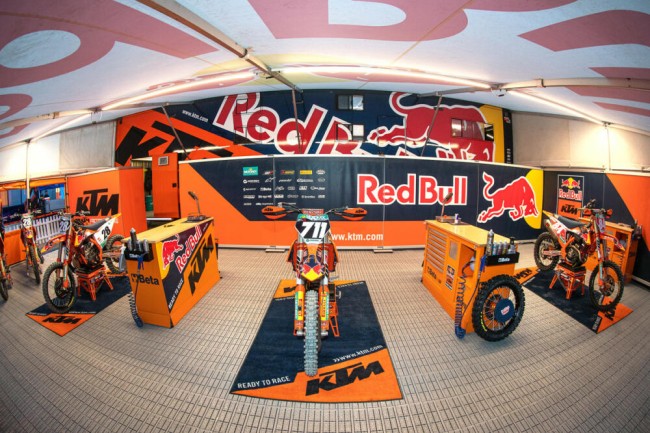 After notable milestones in the last few years such as MXGP podium clean-sweeps, title wins in both categories in the same year, 19 out of 20 Grand Prix triumphs in a single season and being the only team in the premier class to see all racers grasp victories in one campaign: Red Bull KTM Factory Racing will field a refined and dedicated effort for 2022.

Defending No.1 Jeffrey Herlings will aim for his third MXGP crown since 2018 with the latest generation KTM 450 SX-F. He will be joined under the orange awning by 2020 MX2 World Champion Tom Vialle on the KTM 250 SX-F. The team hope to pay homage this year to Rene Hofer; the young Austrian would have been the third member of the line-up until his untimely passing in December. The team will be managed by Joel Smets with Dirk Gruebel assuming a Technical Director role.

Jeffrey Herlings: “It’s been a short off-season but we’ve done all the right work, both for my preparation and on the bike. Red Bull KTM has been my home and family since 2010 and it will look pretty different this year but we still have the same great crew, great bikes and that winning mentality. Matterley Basin will be here before we know it but I’m excited to get out racing again in Spain this weekend.”

Dirk Gruebel, Red Bull KTM Technical Director: “It’s all change for this season. Not only with the rider line-up for Red Bull KTM but also the new SX-Fs. We are also still dealing with the situation of Rene’s loss and having two racers instead of three. However, the goals remain the same and when we look at the potential of both Jeffrey and Tom and the work they have done in the off-season then we are confident. MXGP gets going pretty early in the year and we should have the flyaways again after missing out for two years. We know it will be a long season but it will be good to get back to a normal way of racing. Starting this weekend for Jeffrey in Spain.”