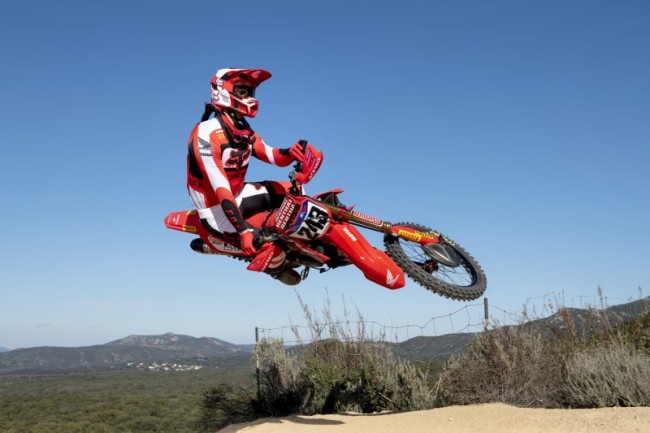 Tim Gajser and Jorge Prado look to be the two leading title contenders with the unfortunate injuries to Jeffrey Herlings and Romain Febvre – although you can’t count both out just yet.

As we saw last year with the injuries to both Herlings and Gajser during the season, anything can happen and probably will amidst the boiling cauldron of elite determination, intensity and speed that is MXGP.

As things stand however Gajser looks to be the man to beat. He wanted to improve his starts and going by Riola he had done just that beating Prado to the holeshot both times. Tim has the winning experience in MXGP and is now rapid in sand as well as hard pack. He has all bases covered and probably starts as favourite.

But Jorge Prado is coming. Two years of illness and injury mean Prado hasn’t even had a proper winter prep until this season and yet he still won races and got briefly into a title contending position the last two years. He’s still very young, very talented and this might be the year we really get to see what he can do in this class with a good winter and no injury or Covid holding him back. Prado is the team leader at De Carli and Gas Gas and he seems super motivated to deliver a world title this year. It might just be his time.

The factory Yamaha trio all look really strong and I don’t think you can count any of them out of being in the mix for a title – not even Renaux.

The Frenchman beat Jeremy Seewer in France and the lap times have reportedly been very impressive at the test tracks. Renaux is full of confidence with big expectations, he might just gp straight into being a contender for the top five, podium and even wins from round one. When Stefan Everts is singing your praises for your speed on a 450 you know you are doing something right.

Jeremy Seewer battled through illness last year then went to another level at the end of the season to get a GP win. He had started the year looking fast again and with his consistency Seewer should be there or thereabouts all year in the leading positions.

Glenn Coldenhoff didn’t have the year he wanted last year but still, when he was comfortable he was fast. And, with a year under his belt now, Glenn says he feels more comfortable this year on the Yamaha and already has a good base setting. He won the Superfinal at Hawkstone in a nice little boost ahead of the first GP and when I spoke to him he seemed pretty satisfied with where he and the bike are coming into 2022.

I would also add Paul’s Jonass to this list if he can remain healthy (he is now missing the opener this weekend after surgery on his arm after suffering tendonitis). Jonass showed some superb speed last year and should be even faster this year. He just needs to be a bit more consistent and he might not be far away from battling for podiums every week. The speed is there for sure.

Of course Jeffrey Herlings could still come back and win this title if he only misses a round or two – but even then he will need to hit top form straight away. The same applies for Romain Febvre so it’s a case of wait and see for the two men who went into last year ties on pointss in the the final moto. But one thing is for sure they will still be expecting to win races this year and Herlings, even if he doesn’t win tjw world title has the chance to make history and become the rider that had won the most motocross races at the highest level -ahead of Stefan Everts and Ricky Carmichael. That is a record that could stand for a very long time…

Podcast! Jonathan McCready and Andy McKinstry look ahead to the new MXGP world championship season and discuss the contenders, the injuries and the rookies plus much more ahead of an exciting new MXGP season.

Listen here on iTunes, or Spotify/YouTube below: