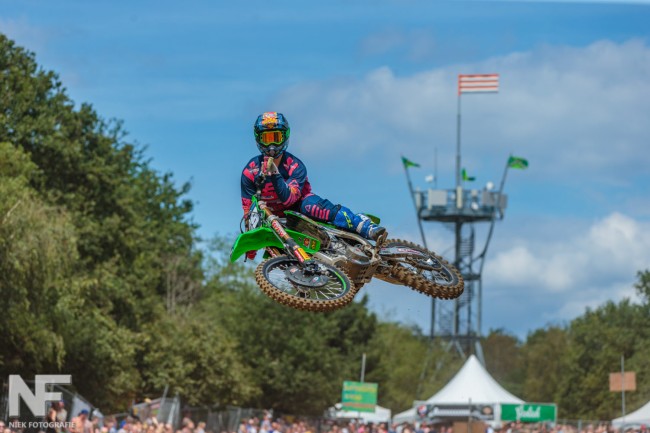 The Dutch Masters series might be over for another year but what a performance it was for young Dutch talent, Roan Van de Moosdijk at the final round of the series as he dominated a competitive MX2 class to go 1-1.

Even though he’s racing the EMX250 championship this year he was up against a number of MX2 World Championship riders such as Geerts, Jacobi, Vlaanderen and simply dominated! It’s not like the others rode badly, Van de Moosdijk just rode wonderfully well.

The F&H Kawasaki rider has put himself well and truly in the frame for the Netherlands Motocross Des Nations team that will head to Assen.

In the EMX250 series, Van de Moosdijk sits third in the series but only 13 points off Rubini who leads the championship and the Dutch rider is hot favourite for Lommel so anything can happen.

We caught up with Van de Moosdijk after his superb performance at the final round of the Dutch Masters.

Gatedrop: Roan, wow! That was a superb weekend for you pretty much dominating here at the final round of the Dutch Masters. You must be really pleased with that?

Roan Van de Moosdijk:  Yeah, I am really happy. I didn’t expect it this morning to go 1-1 quite easily. I had two good starts, in the first moto I had a little battle with my team mate, Adam (Sterry). In the second moto I battled with Jago (Geerts), for a few laps then I passed him. I saw Calvin (Vlaanderen) there behind me, three or four seconds. I was able to gap him and win.

Gatedrop: In the second moto, you and Calvin were pretty until around the half-way mark and then you pulled away. That must feel pretty good and give you a lot of confidence?

Roan Van de Moosdijk: Yeah, at one point I could see Calvin on the track and every lap it was the same. I found some different lines and different things. That helped me a lot so I’m happy.

Gatedrop: Just on the EMX250 series, maybe the start of the season didn’t go to plan but the last three rounds you’ve been on a roll. You must be pleased with how it’s going now?

Roan Van de Moosdijk: The last few races have been really good for me. We would like to continue like this in Lommel and Sweden.

Gatedrop: Lommel is a track you know well and are good at, I’m guessing you’re going there to win and anything else will be a disappointment?

Roan Van de Moosdijk: Yeah, that’s the goal. I want it to go like today. Sweden, I’ve never been there but we will see how it goes.

Gatedrop: Deciding to race the EMX250 series again this year, looking at it now do you think it was the right decision and MX2 might have been a little too early?

Roan Van de Moosdijk: Yeah, maybe looking at it now, it was the right decision. At the beginning of the season I talked with Marc (de Reuver), he said I needed to stay in EMX250. I wanted to go up to the MX2 World Championship but when I look now I think it’s a good choice to have stayed in EMX250.

Gatedrop: Just on the Dutch Des Nations team, we will have to wait a while for the team to be announced but you’ve put yourself in the frame now! How would it feel to represent your country at such a big race?

Roan Van de Moosdijk: That would be amazing. It’s in Assen, in Holland. For the first time in my career, it would be really nice. We will see.