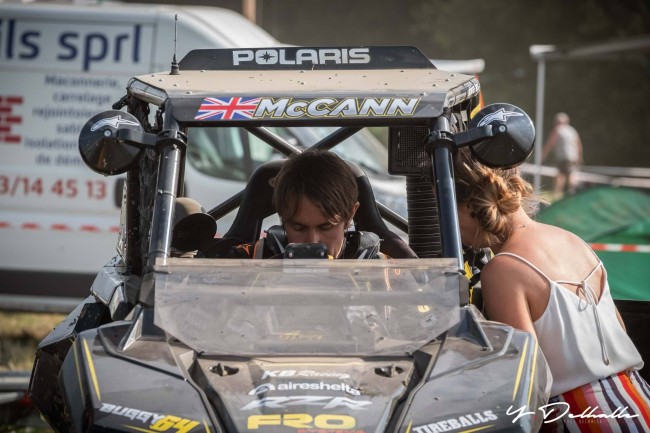 The start of the Arenacross UK series is just around the corner and it’s set to be a great series with some big names signed up for the six rounds.

Mark McCann has ran the Fro Systems team in the Arenacross UK paddock for a number of years and the team is back for 2020 but McCann has made the decision to run two teams – the Offset CBD team as well.

Both teams are strong with Dan Reardon and Brian Hsu forming the Fro Systems team with Carl Ostermann in the Rookies class. The new team, Offset CBD will run Thomas Ramette and Ashley Greedy.

There’s no doubt one of them riders could win the championship as they certainly have the ability.

We caught up with McCann to discuss both teams, the series and much more.

Gatedrop: Mark, it’s obviously a busy time of the year with the Christmas period but it’s not long to go until the Arenacross UK series, are you looking forward to 2020 series kicking off in Belfast?

McCann: We are really looking forward to the series kicking off. With it being the most watched series on the UK calendar, it’s something we feel is important for our brand to be there.

Gatedrop: I believe you’re actually the man behind two teams next year – the Fro Systems team as well as the Offset CBD team which is a new team. What’s the reason for running two team’s, I imagine that’s a lot of work?

McCann: It is but we had the opportunity to take some really good riders so we decided to run two teams. We have a new company – Offset CBD which actually comes live on the day of the first event in Belfast. Due to the timing, it seemed to good of an opportunity and we didn’t want to waste that.

Gatedrop: In the Fro Systems team you’ll have Dan Reardon and Brian Hsu, that’s a very very strong line up, you must be pleased with that?!

McCann: Yes, we are. Obviously having Cedric Soubeyras the past couple of years has been a real pleasure and we’ve had great success. With everything, sometimes you just need a change to make things exciting again.  With Dan in 2018, his speed was extremely fast so I think he has a very good chance of winning the title. With Brian (Hsu), we’ve seen his results and they’ve been very strong the past few months in the European (SX) rounds. He stands a very good chance of being at the front in the pro lites class.

Gatedrop: The Offset CBD team you have a former champ, Ramette and the bad boy of AX, Greedy, that looks to be a good mix?

McCann: We have Thomas (Ramette) who’s proved himself in years gone by but unfortunately he was out due to injury at the start of this year. He’s getting stronger and we all know he knows how to race Arenacross. With Ashley, no explanation is really needed there, he’s a real fighter. Ashley is actually a bus driver and so because of that his time on the bike is extremely limited, because of that he starts off on the back foot but he never needs that excuse – he always gives it his all.

Gatedrop: I am very impressed you managed to attract Brian Hsu, he’s got a lot of talent and ability, how did the deal all come about with him?

McCann: On the Fro Systems team we also have Carl Ostermann who will contest the rookies class. He’s on the same team as Brian Hsu is on for 2020, he really wanted to race the UK series at the beginning of the year. Due to Carl and his dad, Thorsten it give us an opportunity to bring Brian over as well. He will get the transport with Carl so it works out well.

Gatedrop: Just on the AX series, what’s your thoughts on it, every year it seems to attract bigger and bigger names which can only be good for the championship?

McCann: For sure, I think this year there’s probably five or six riders who can win main events. The racing is going to be unbelievable, it really does seem to get better every year. The good thing is that the ability of the riders is very close so the racing in such a small arena is always very very exciting.

Gatedrop: You’ve ran the Fro Systems team in the series for a number of years now – in terms of exposure it seems to be worth doing with thousands of people in the Arena, is it helping your business grow?

McCann: Yes, the exposure is obviously good for us but more than that, it’s that time of the year we get to have a bit of fun. We work hard all year and after Christmas it’s are quieter time and it’s before the Motocross season starts so it’s basically six holiday’s for us.

Gatedrop: For the 2020 series, what’s your expectations for both teams – I imagine you’d love to win the series!

McCann: I think the Fro team has an opportunity to win the series but also the Offset CBD team as well, we definitely have a strong chance of winning the championship.

Gatedrop: You seem to really enjoy the AX series and getting behind it – would you ever consider running an outdoor Motocross team or will be as far as it ever goes for you?

McCann: This is definitely as far as it will ever go for me. I race cars in the normal year so it’s impossible for me to have the weekends to ever consider an outdoor Motocross team.