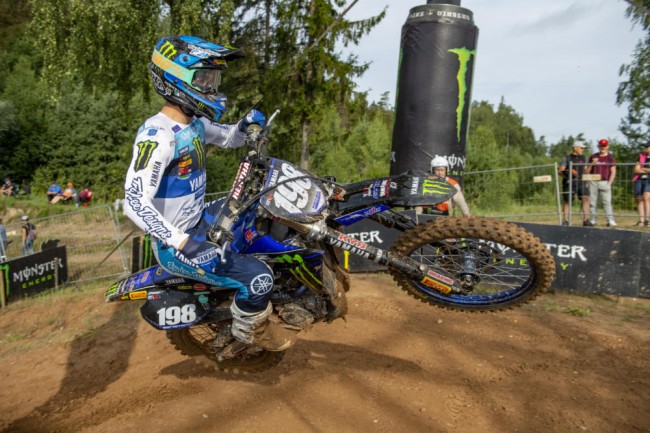 Yamaha’s Factory MXGP and MX2 teams will be back to full strength this weekend at the Portuguese Grand Prix with the return of Monster Energy Yamaha Factory MX2’s Thibault Benistant. Benistant will join his teammate, the current MX2 Championship Leader Jago Geerts, along with the entire Monster Energy Yamaha Factory MXGP squad, Maxime Renaux, Jeremy Seewer and Glenn Coldenhoff in Agueda, Portugal, for the fourth round of the FIM Motocross World Championship this weekend.

With three rounds of racing already in the books, it is evident that Renaux has landed on his feet inside the top-tier class in MXGP. Currently second in the championship standings, only 17-points shy of the four-times World Champion Tim Gajser, the 21-year-old Frenchman has already established himself as a title threat. Of the six races raced this season, the MXGP rookie has already celebrated a race win and only finished outside the top three once. Going into the remaining 16 Grand Prix rounds, the 959’s goal will remain the same. He will strive for more top-three finishes, more race wins, and his next milestone achievement, a premier class Grand Prix win.

After a taxing trip across the equator, Glenn Coldenhoff has focused on making a full recovery as he looks to build on his solid top-five finish in Argentina. Aiming to reach the podium in the very near future, ‘The Hoff’ has been looking at where he can improve his program. A thorough fitness test in the weekend off has confirmed the Dutchman is in strong physical condition, offering an added boost of confidence as he gets set to improve his current eighth place in the championship chase.

Jeremy Seewer has made a strong recovery after a spectacular fall in Argentina. The 27-year-old star returned to Switzerland for some much-needed ‘down-time’ where he caught up with his friends and family while his body healed from the crash. He has since returned to his normal routine and looks forward to arriving in Agueda, fit and strong with many happy memories, including an emphatic Grand Prix win in 2017. He is currently fourth in the championship chase, 24-points shy of Jorge Prado in third.

As a three-time MX2 medalist, and the current MX2 Championship Leader, Geerts looks to use his years of experience to his advantage. Remaining with the Monster Energy Yamaha Factory MX2 set-up for a fifth consecutive season, the 21-year-old Belgian has refined the set-up of his YZ250FM and is looking fitter, stronger and faster than ever. Maintaining a 26-point advantage at the top of the table, Geerts is fully focused on keeping his podium streak, which is currently at 100% in 2022, as he continues to strengthen his grip on the MX2 Championship Lead determined to secure his first-ever MX2 World Title.

This weekend, the Monster Energy Yamaha Factory MX2 Team will be back to full strength with the return of young French star Thibault Benistant. Benistant underwent a knee reconstruction at the start of November last year and has made a full recovery. With no pressure, the 19-year-old looks forward to lining his YZ250FM up for the first time this season as he gets set to ‘ease’ back into racing.

Located 75 kilometers south of Porto, Agueda staged its first Motocross Grand Prix in 1985 and has since gone on to host 22 more rounds, with the most recent round taking place in 2019. The track is 1630 meters long and is widely recognized for its distinctive orange clay base. This weekend, the venue will also host the second round of the FIM Women’s Motocross World Championship, which is currently led by two talented YZ250F racing ladies, Ceres 71 Yamaha Racing’s Nancy van de Ven and JK Yamaha Racing’s Lynn Valk. The duo of Dutch stars are tied at the top of the table on 47-points.

Last but not least, the Hutten Metaal Yamaha Official EMX250 Team will also be onsite with the Championship Leaders’ Red Plate firmly attached to Rick Elzinga’s GYTR kitted YZ250F as he looks to extend his championship lead this weekend. At the same time, teammates Andrea Bonacorsi and Dave Kooiker aim to bounce back from a tough weekend in Mantova with some solid points and a podium finish in Portugal.

Maxime Renaux
2nd MXGP Championship Standings, 124-points
“I enjoyed a weekend off; I went back to France to see my family and friends as I recovered to be ready for Portugal and two back-to-back GPs. I’ve only raced in Portugal once before, so I hope to make some good memories this weekend. I really like the track. It has nice jumps and nice ground, so I think it’s a track where you can have a lot of fun. I look forward to it and hopefully being back on the podium this weekend.”

Jeremy Seewer
4th MXGP Championship Standings, 94-points
“I managed to recover from Argentina pretty well. It was really nice to have a weekend off. I went back to Switzerland, which was a little bit of a silver lining because I didn’t plan to be there, but after the crash, I took some time off to recover, which gave me the chance to catch up with some friends and live a normal life for a few days. I won a GP in Agueda in 2017 in MX2, and it is still one of my best memories of a GP win because of the way I rode that day and made it happen. It’s a track I like, I always enjoy it, so I am really looking forward to going there. A lot of Positive vibes.”

Glenn Coldenhoff
8th MXGP Championship Standings, 71-points
“After Argentina, I focused on recovering, so I haven’t done so much. On the weekend, I did do a physical test to see where I am at, and the test was good. We know where we can work to make it even better, so that is good. I have been very close to the podium many times in Portugal, so many times fourth overall. It’s a track that I like and the weather conditions look a bit wetter than usual, and this is something that will suit me too because it will mean there will be a lot of line choice and it will be good.”

Jago Geerts
MX2 Championship Leader, 137-points
“I didn’t do anything in particular after Argentina, just some riding on Saturday and I used Sunday as a recovery day. I only rode two GPs in Portugal in 2018 and 2019, and I finished 3rd in the first moto in 2019. That was a fun race coming from around tenth to third after some good battles. I like the track there; it is pretty fun. It’s a special track and a bit like the old-school tracks so it’s fun to ride.”

Thibault Benistant
“I’m back in Portugal and I’m really excited to be back behind the gate, it has been a while! I have only been to Agueda once before, but I remember the track was really nice. From what I remember, I really liked riding there, so coming back to racing there will be nice.”