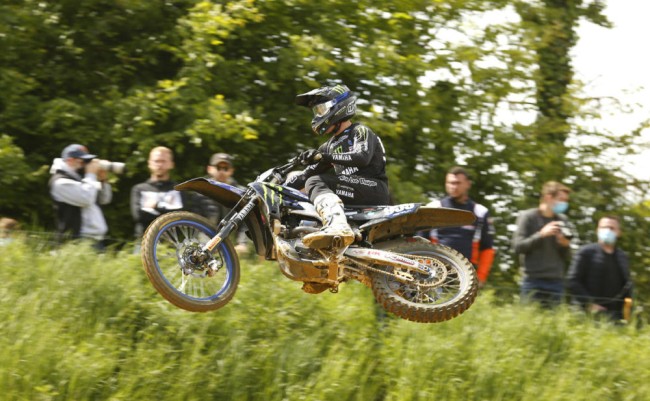 Renaux, who set the third fastest time, got a good start on his YZ250FM in the first race. The Frenchman was right behind Strijbos and Seewer – on their powerful 450’s – in the first turn. Renaux, who recovered well from a dislocated shoulder in Riola Sardo at the end of February, immediately found a good rhythm and stayed in third position until the end. Geerts had a mediocre start (ninth) and suffered from arm pump. The Belgian only found a good rhythm at the end and tried to pass Petrov in the ultimate corner to take sixth place. Unfortunately, he went down and finished ninth. Two places in front of his team mate Benistant. The Frenchman – who recovered well from a broken collarbone in January – completely missed his start (18th), but quickly found a good speed and managed to gain – despite two small crashes – seven positions.

Benistant on fire
Benistant got a much better start in the second race and was fifth, behind four MXGP-riders. The reigning European Champion EMX250 felt great and passed Van Doninck to take the fourth place, but lost that spot to good old Strijbos at the end of the race. Meanwhile Renaux fought back from 8th to 6th place, which was just enough to get on the overall podium, together with the Yamaha MXGP riders Seewer (1+1) and Strijbos (2+2). Geerts lost his balance at the start and had to fight back from far behind. Not easy with a lot of 450 riders. Nevertheless, he managed to finish ninth.

“I was surprised by the intensity and the speed in this first race in a long time. From the beginning, it was an aggressive race, which is a disadvantage for Geerts. We know from the past that Jago suffers from arm pump in the first races and needs time to find his best level. Maxime and Thibault had no problems with arm pump and immediately reached a high level. It’s only a preseason race, but it’s still nice to have a rider on the box. Especially after competing against the powerful 450 bikes on a sketchy track.”