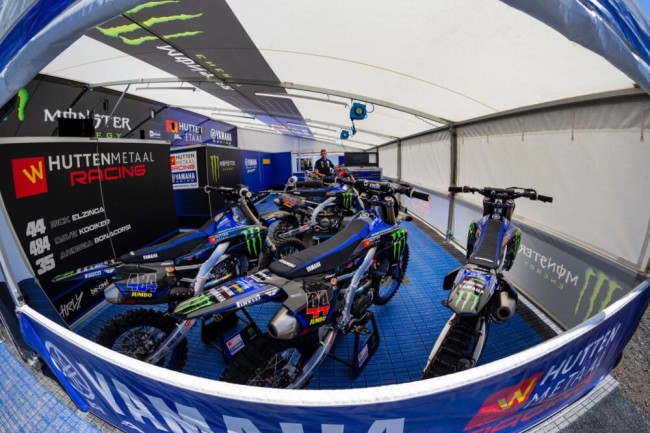 Yamaha Motor Europe is pleased to confirm the Hutten Metaal Yamaha Official EMX250 team will field a strong three-rider line-up in 2023, while the MJC Yamaha Official EMX125 team will field an all-new and potent two-rider line-up for its 2023 EMX125 Championship campaign. Yamaha and Hutten Metaal have retained EMX250 title challenger Andrea Bonacorsi for a third season and are poised to welcome Ivano van Erp and Karlis Reisulis as they step up the Yamaha Racing pyramid. At the same time, Yamaha is excited to welcome Janis Reisulis and Julius Mikula to the MJC Yamaha Official EMX125 team. All five riders will campaign GYTR-kitted versions of the YZ250F and YZ125 in their respective championships.

Impressive right from the get-go, Bonacorsi has been a force to be reckoned with during his first two seasons with Yamaha inside the highly competitive EMX250 class. The young Italian celebrated two race wins and three podium finishes in his rookie season and added to that with another race win and four pieces of podium silverware, of which one was a maiden overall victory, in 2022. Going into his third consecutive season in the MX2-feeder class, the goal for ‘Bona’ is clear; he is going for the title.

As a two-time Junior World Champion, having claimed the 65cc World Championship title in 2017 and the 125cc crown this year, Dutch prodigy Van Erp is looking forward to his debut season in EMX250 with the Dutch-based Hutten Metaal Yamaha Official EMX250 team. The 17-year-old talent joins Yamaha’s Official EMX250 squad after five years with Yamaha and three brilliant years with the MJC Yamaha Official EMX125 team in the EMX125 Championship, in which he celebrated seven stunning race wins and six overall victories aboard a GYTR-kitted YZ125.

Like Van Erp, K.Reisulis will also move up the Yamaha Racing Pyramid after two incredible years with the MJC Yamaha Official EMX125 team. In 2021, the Latvian bounced back from a costly pre-season injury to end his first full EMX125 term with two podium finishes. The 16-year-old eventually proved his true potential, starting this year fit and healthy to finish as the EMX125 Championship runner-up after a brilliant race win and five podium finishes.

All set for an exciting EMX125 campaign, the MJC Yamaha Official EMX125 team is thrilled to welcome two of Europe’s quickest youngsters, J.Reisulis and Mikula. J.Reisulis, the younger brother of K.Reisulis, has already established himself as a name for the future. The phenomenally talented young Latvian made his EMX125 debut in 2022 and, at the tender age of 13, finished on the podium at round one. He then continued his stunning form throughout the year and ended the season third overall with five podium finishes, which includes a stunning round win in Lommel, Belgium.

Mikula enjoyed a solid second term inside the EMX125 Championship in 2022, proving his potential with a podium finish in Lommel, Belgium, and a further two top-five finishes during the season.

Andrea Bonacorsi
Hutten Metaal Yamaha Official EMX250 rider
“I’m really happy to stay with Yamaha and the Hutten Metaal Yamaha Official EMX250 team for a third straight year. I had a really good rookie season with them, which I am proud of, although this year was a bit tougher. The team always supported me through the highs and lows, and I have learned a lot. After these past two seasons, I feel stronger and ready for the challenge of taking the title next season!”

Ivano Van Erp
Hutten Metaal Yamaha Official EMX250 rider
“I have been inside the Yamaha Family for five years, so it feels amazing to stay with Yamaha for another season. It’s always nice to be on the Official team, even more so when you are a rookie. I was already practicing on a YZ250F at the start of this season, so I know I like the bike and I’m looking forward to racing it next year. As a rookie, I will arrive with no expectations. It’s important I take the experience, have fun and enjoy my riding.”

Karlis Reisulis
Hutten Metaal Yamaha Official EMX250 rider
“It sure feels great to stay with Yamaha and to join the Official EMX250 team, which I know operates at a high level. I think it is a great opportunity and a great way to start my EMX250 chapter. After two good years with Yamaha, I have already been riding on a YZ250F, and I love the bike. I will go into next year aiming to qualify at every round and score good points. I’m really looking forward to it.”

Janis Reisulis
MJC Yamaha Official EMX125 Rider
“I am really excited to join Yamaha and the MJC team. It’s a great opportunity for me, and I look forward to the new chapter. I always dreamed of racing a YZ125, so this is a little flex! I’ve done some testing and riding on the bike, and I think my YZ125 is perfect. I enjoy riding it. In 2023, my goal is to win the European Championship and it would be perfect to add a world title to my list of achievements too.”

Julius Mikula
MJC Yamaha Official EMX125 Rider
“I’m very excited to join Yamaha. I look forward to the new experience. It is very motivating, and I already feel good and confident on the YZ125. I want to be top three in the European Championship next year and top three in the world too. The plan of attack is to stay healthy and keep improving.”

Thorsten Lentink
Yamaha Motor Europe MX Racing Coordinator
“2023 will be an exciting year for us inside both EMX250 and EMX125 Championships. We are happy to keep Andrea in blue for another year and have him lead the way with his strength and experience in the EMX250 class for our youngsters, Karlis and Ivano, making a step up the Yamaha Racing Pyramid. It’s always a pleasure to keep talented riders, like these three, within the Yamaha Family. We’re also pleased to strengthen our relationship with Hutten Metaal as it enters its fourth year as our Official EMX250 team.

In the 125 ranks, we have an exciting season ahead as we welcome two very talented youngsters to the MJC Yamaha Official EMX125 team. Janis, the younger brother of Karlis (Reisulis), is a rider we have watched intently this season and were very impressed with his speed and ability. Despite his young age, he has quickly progressed to the top of the ranks in the EMX125 class and is a hugely exciting prospect for the future. We are also happy to welcome Julius, a rider who has made incredible progress inside the EMX125 class over the past two seasons and a rider that we are confident will continue to grow and develop with our support.”