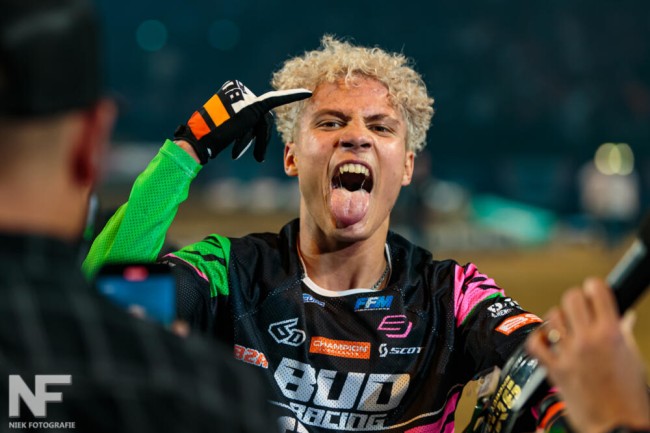 This time last year, Quentin Prugnieres completed his rookie EMX250 season after making the move up from the 125cc and it’s fair to say he’d have wanted better results. However, 2022 was a positive step for Prugnieres career as he developed really well in the EMX250 series stepping on the overall podium twice and finishing an impressive fifth in the championship.

It has already been confirmed that Prugnieres will be staying with the same setup for the 2023 season – the BUD Racing Kawasaki team to once again focus on the EMX250 series. The French talent will be one of the dark horses going into the season ahead.

To end this season, Prugnieres raced the Paris Supercross and showed great improvement over the weekend considering his lack of Supercross experience – finishing third in the final SX2 race of the weekend was a superb ride.

The season isn’t over for the BUD Kawasaki rider just yet as he’s heading to America to contest the Mini O’s event against the best young Americans which runs between the 19th and 26th of November.

We caught up with Prugnieres to discuss his season, plans for the future and much more.

GateDrop: Quentin, this was your second time racing here. How did it compare to last year? The track was more technical but it seemed to suit you and especially that last moto, that was unreal…

Prugnieres: True, the track was a lot more technical this year. The whoops were very big but the rhythms were alright, I could do them all very good so I am happy about that. I am very happy about my evolution during the weekend, I am taking the positives from the weekend and I am looking forward to one day go to USA to race there. I had so much fun this weekend, I enjoyed the track so much and it was unbelievable to end the weekend with a third position. I mean this is the Supercross of Paris, I have dreamed about this since I was a kid when I was watching it on the TV. It’s just amazing to be here and I am very grateful to everyone who helped make this happen..

I want to thank my team, my coach (Thierry Van Den Bosch) and my mental coach. We just made unbelievable work this weekend with the improvements we made over the weekend.

GateDrop: As you mentioned, you got better and better with every session but to finish third in the last race and also the whoops, you were doing them pretty good at the end considering…

Prugnieres:  Yeah, a big big improvement. I mean I wasn’t really ready to run in third (laughs). I had such a good start and I was like: “Oh f**k, I am right there, top five, what the”. I just give everything I had right until the end, I was pretty stressed but I managed it very good. I don’t know, I don’t have the words for it, it was just amazing.

GateDrop: Was it just a matter of getting a good start and being able to copy the front two riders? I mean I think it shows how talented you are to pick that up so quickly…

Prugnieres: True, I think I have good speed and a good technique for it but I just need to have more time on a Supercross track. I need to keep going and with time I will be better, I trained from the end of September and October so it is a short time to learn Supercross. I think in the end I did good, the beginning of the weekend was very difficult but the improvement was very good. 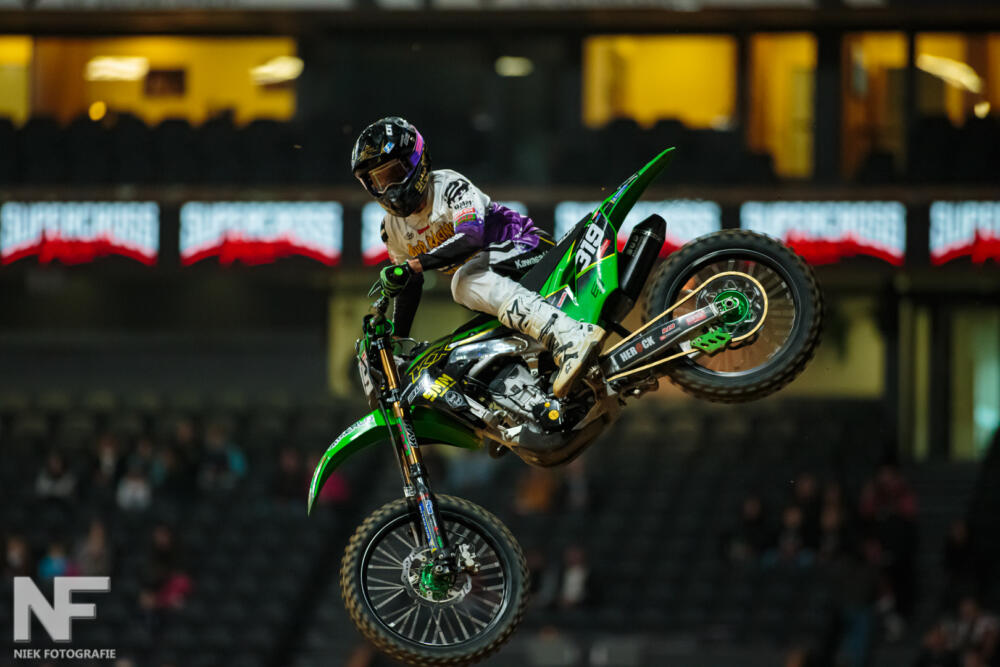 GateDrop: Just going back to EMX250 series, this time last year you had finished your rookie season and you probably would have wanted more but coming into this year you clearly had a good winter and had a really good season. Where you happy with your season and how did it feel like to stand on the podium for the first time?

Prugnieres: Being on the EMX250 podium was just an amazing feeling. That is something I was waiting for since a long time. I am so happy about it, I would have liked to been on the podium before but I ended the season fifth in the championship. I started the championship outside the top ten so to end it in the top five with two podiums. The one in France, it was amazing to finish the season like that.

Now we are finished with the Supercross but we will go to America to race the Mini O’s. I will go and train in the USA for that, then come home and work a lot for the EMX250 series next year.

GateDrop: Growing up some of the French guys weren’t the best in sand but the new French generations seem to be a lot better in sand. One thing about you is that you are strong in sand and hard pack, is that something you’ve been working on from a young age to be good in all conditions?

Prugnieres: Yes, we have worked on it for all these years. In the sand I feel very comfortable, I think I need to be more efficient and stronger in hard pack but I know where I need to work. I think right now I can ride quite fast everywhere but we will work at it like every rider does. We are working a lot to make it perfect trying to get the best version of myself.

GateDrop: You are going to race the Mini O’s in America, what’s your goals for that event? I mean the youth scene in Europe is much better in my opinion but the Mini O’s races will be sprints so is that something you’ll maybe have to work on?

Prugnieres: I think I have got the speed but I don’t really have any goals for the moment. I don’t know too much about the race but I will go to hopefully have good starts, make good races and we will see. I will train for short sprints, I have sort of been doing that for Supercross with it being short but we will keep going, keep training and work hard. I will give the best of myself trying to put the best version of myself out on the track. In the end, if I have fun, ride good we will see the result at the end but there’s no reason for a bad result. I will go into it positively and that’s it.

GateDrop: Going into the EMX250 2023 season I guess you will be looking at plenty of podiums, maybe your first race win and maybe you’ll be an outsider for the championship… going up against the Fantics it might be difficult to challenge for wins every week…

Prugnieres:  Don’t take bad what I am going to say but I don’t care about other bikes and if they are faster or not.  I have my bike, I work with what I have and even if my bike isn’t the fastest what I have is enough, I showed that this year. When the 250cc four stroke was not the fastest I could still do podiums and finish races in second so I have my bike, I will give my best and there’s no reason for bad results. I think we are positive, we working hard physically as well as with the bike.

GateDrop: I am assuming you want to do enough next year to earn an MX2 GP ride for the 2024 season?

Prugnieres: I mean, I don’t know. It will depend on the opportunities that I have. I mean I would love to go to USA as quick as possible. I really would like that but if I have the opportunity to race with a good team and good bikes in MX2 for 2024 I wouldn’t say no. It is a very good school to learn and be stronger for America later. It is different but it makes you mentally tougher because MXGP is very tough but I think it would be a good experience but it depends on what will come. I am just going to keep going and give my best the next two years to be where I want to be and that is it.