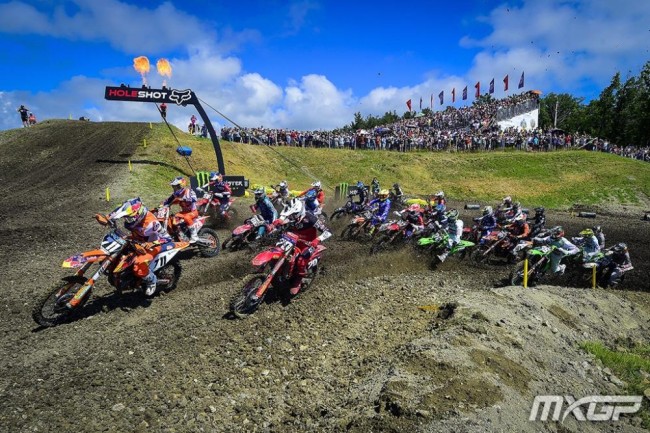 It’s the start of a new season but it was the same Tom Vialle from last year during the opening round of the 2021 season in Russia. Despite only qualifying in ninth he clearly wasn’t too bothered as he said he had a good feeling with the track so went into the races confident. The MX2 World Champion didn’t have the best of gate picks but that didn’t stop him grabbing the holeshot in the first moto and he never looked back as he won by over ten seconds. 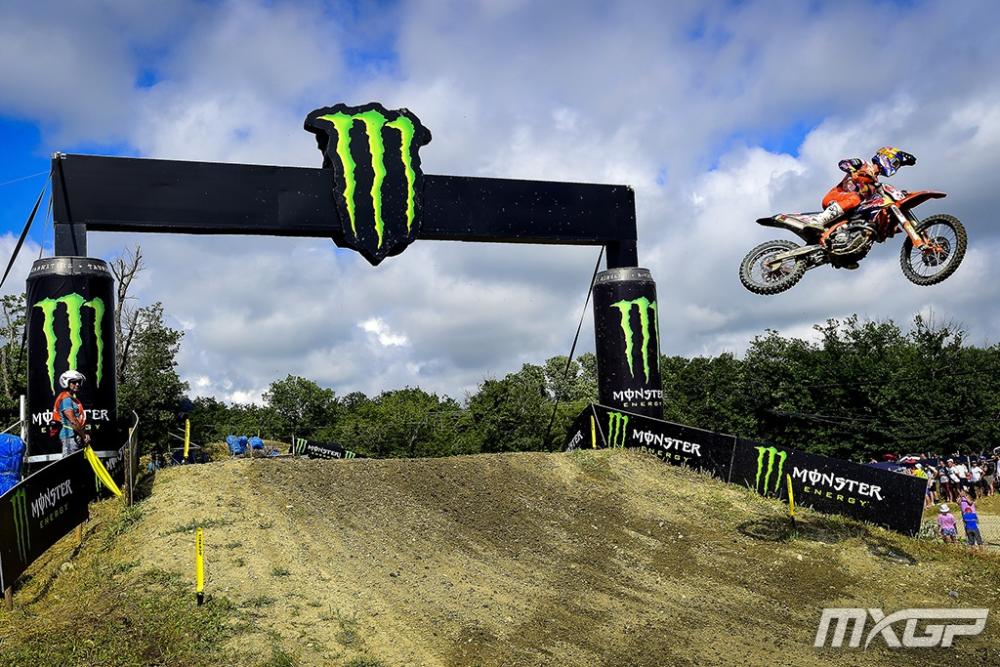 In the second moto he didn’t get the holeshot but was into the lead after the first couple of corners – aggressive and clever riding. Just like in the first moto he checked out at the front in what was the perfect day for the French talent. The start of the season couldn’t have went any better for him and on this form he’s going to take some stopping.

Last year Ruben Fernandez had his breakout year finishing ninth in the championship standings but he was quite vocal about needing better equipment. We saw just why at round one this year on his 114 Motorsports Honda debut because he clearly has the speed and enjoyed the slick hard pack conditions. 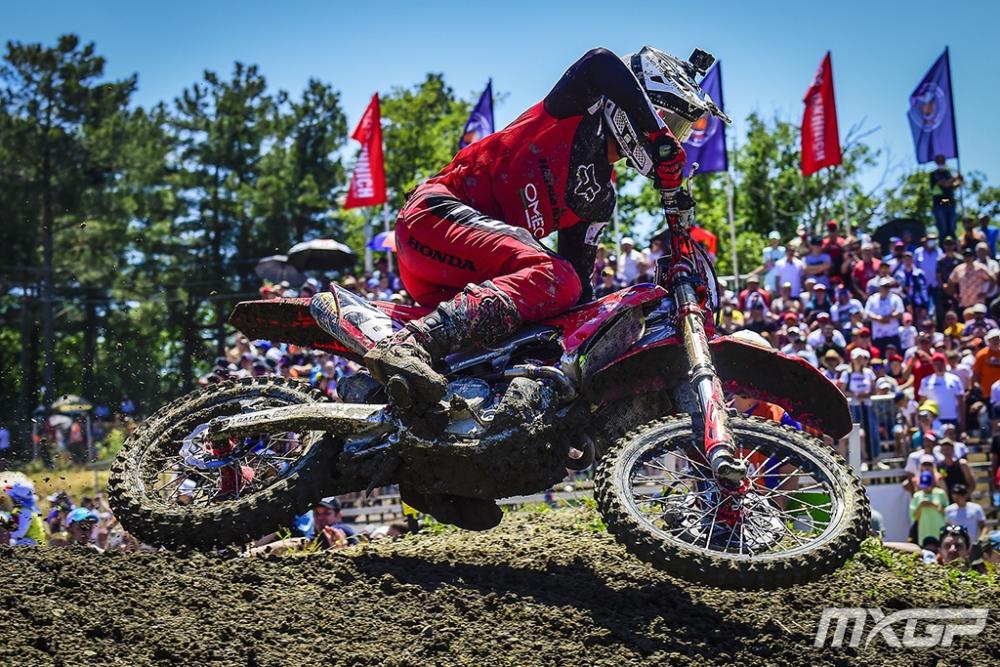 The Spaniard had the best GP of his career so far and his first podium by going 2-3 for second overall and at the end of the second moto he had no issues taking Hofer out to clinch the second step of the podium. Fernandez could be a dark horse and now he believes he has the full package behind him he should be more confident heading into the rest of the GP season.

“I’m really happy, it’s my first ever podium. I had two good races, I had good starts. In the first one I tried to battle with Tom Vialle from the first laps but I started to make a few mistakes and had to take my own pace. I tried to make no more mistakes. The second race, I managed to get into first and had a good battle with Tom, later I made two mistakes in the same corner, then I struggled with my rhythm, got passed and then on the last lap I had to go for the pass on Rene for the second place on the podium, so I took my last chance. I’m really happy about the race”, Fernandez stated regarding his weekend.

There’s no doubting how fast Mathys Boisrame is, he has the pace to run at the very front of MX2 but at times he’s too aggressive and it can lead to crashes. In Russia, the F&H Kawasaki rider was fast all weekend long and looked at home in the slick track that was like riding concrete.

Boisrame went 4-2 in the moto’s for third overall which is a super start to the season. At the start of the 2021 campaign he came into the season with a wrist injury so it’s nice to see him fully fit from the opening round so we can see what he can do. The French talent is also in his last year of the class so will be eager to impress so he can land a good MXGP ride in 2022. 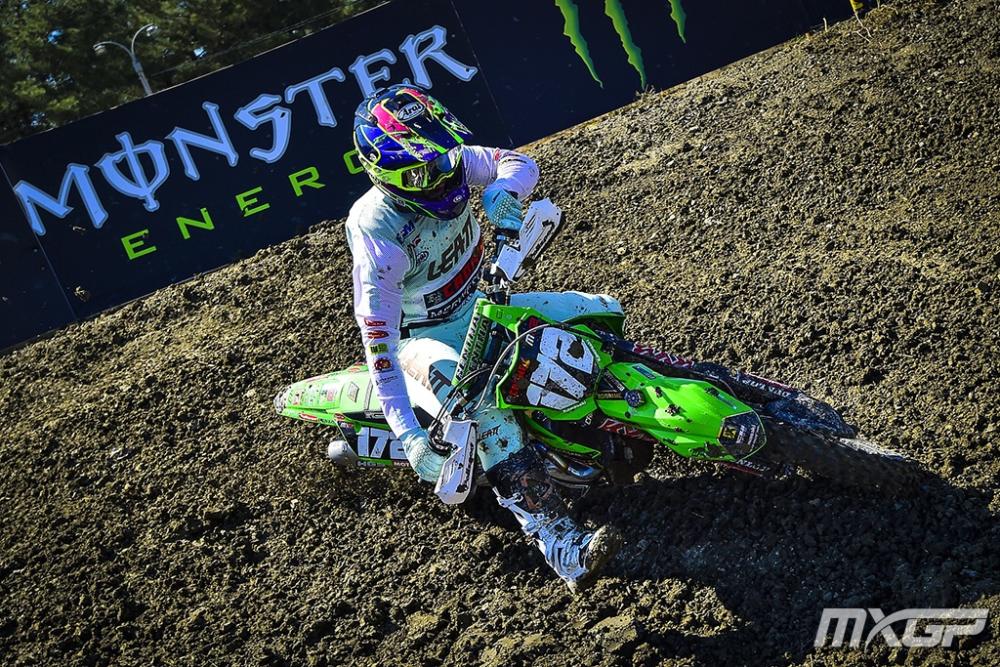 “It was a good day with the fastest lap time this morning and then two decent starts. I made a few small mistakes but my speed was good both motos. The track was not easy so I’m happy to be on the first podium of the season; sometimes I’m a little bit too aggressive; I am working on that with Marc (de Reuver) and the team and today everyone was happy with the result. The team is like a second home for me; we have such a good connection and work in very good conditions to prepare a good season. Now we have two weeks to work again on our starts before the next GP at Matterley”, Boisrame stated.

After picking up an injury last year, Rene Hofer’s rookie MX2 season was cut short so he came into the 2021 season without GP racing for over a year. The young Austrian is impressive to watch, he never looks flustered and is very smooth. Of course he is trying his hardest but it never looks to be the case and that’s a great trait to have. 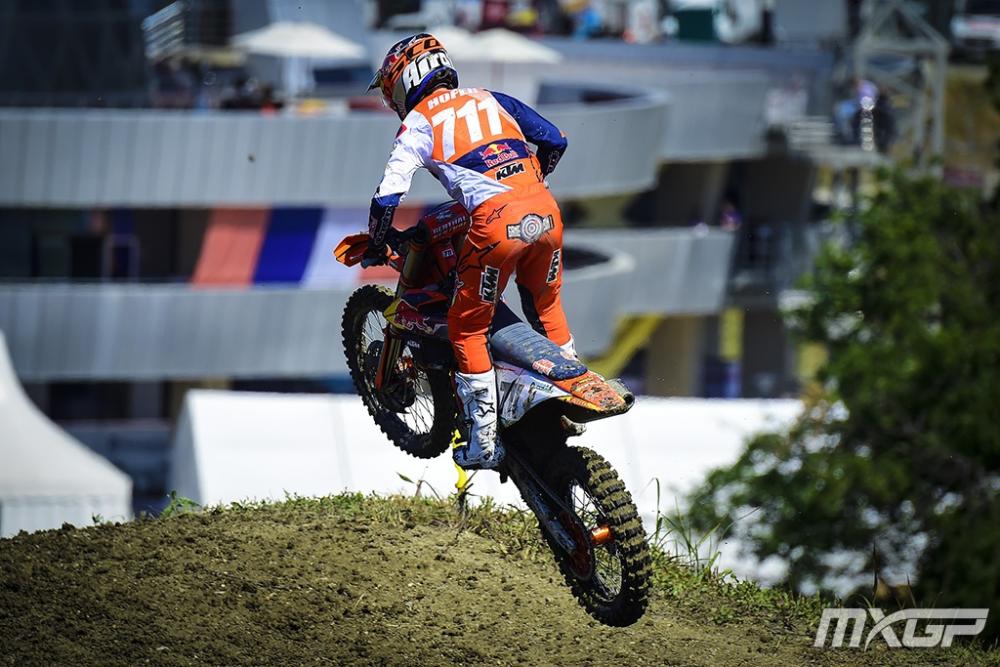 Despite the fact he hasn’t raced a GP in over a year he looked comfortable battling right at the front and even though he was struggling with arm pump. The Factory KTM rider went 5-4 for fifth overall which is great start to the season. He’s a consistent rider so there’s no reason why he can’t be a consistent top five rider this year because he clearly has the talent.

“Definitely a good start to the season. I wasn’t that far forward in the first moto but moved up from 11th to 6th on the first lap. I rode quite good in the first half of the race but then ran into some arm-pump and was holding on as much as I could for that 5th place. My riding wasn’t great but top five was OK. A holeshot in the second moto! But a little mistake meant I went back to third. I could keep up with Fernandez quite well until he crashed. I was making time on Tom, so the middle of the race was really good. Some small errors meant Boisrame could get me, and then I went down on the last lap with Fernandez. A shame but I’m still happy to finish top five in the first GP. A lot of chances still remain to get on that podium”, Hofer stated.

One rider that went under the radar during the opening round of the season was Simon Laengenfelder but he still ended up a strong ninth overall. Starts weren’t his strong point but he battled hard and showed strong determination to go 12-8 for ninth overall. A good start to the season for the Factory GasGas rider in a stacked class and moving forward he has lots of potential.

“I’m really pleased to get round one completed with some decent results on the board. The first few laps of each race were really chaotic, and I lost a few places, but I was smart and when things settled down I could push forward. Ninth overall is a great start to the season for me and the team and a great place to build from”, Laengenfelder stated.

Coming into the weekend not many people would have expected too much from Jan Pancar but coming into the World Championship season he had some good rides in the Italian Championship and was looking strong. During the opening moto Pancar was on fire battling with factory riders and finished a very impressive eighth. 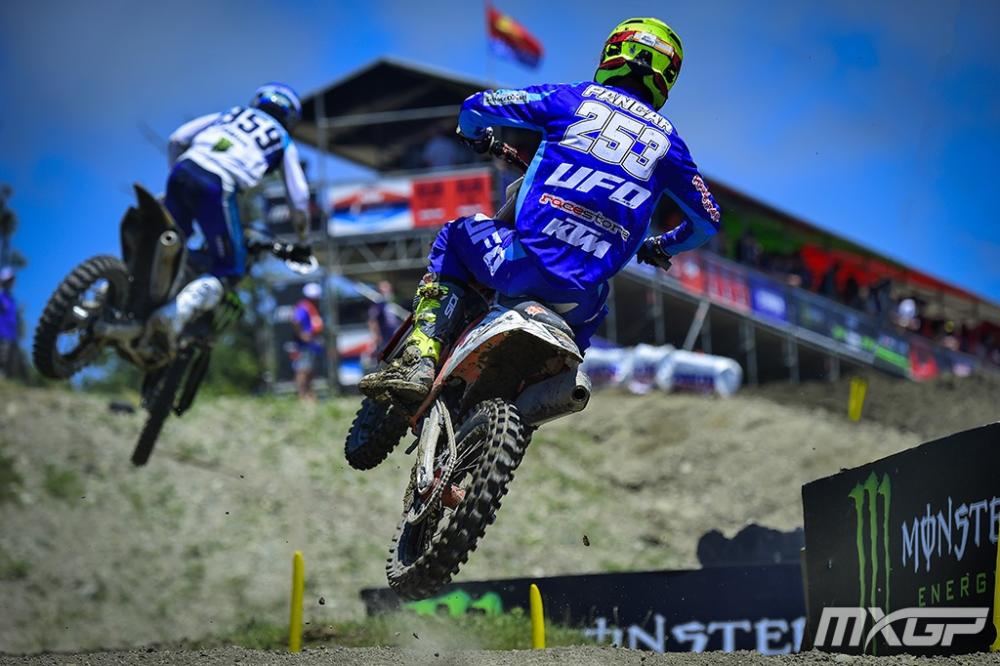 In race two he proved it was no fluke after a very bad start he worked his way from eighteenth to tenth before a mistake demoted him to twelfth but he showed he has the speed. Tenth overall for the Slovenian is a very good result and this should help his confidence progressing on to the rest of the season.