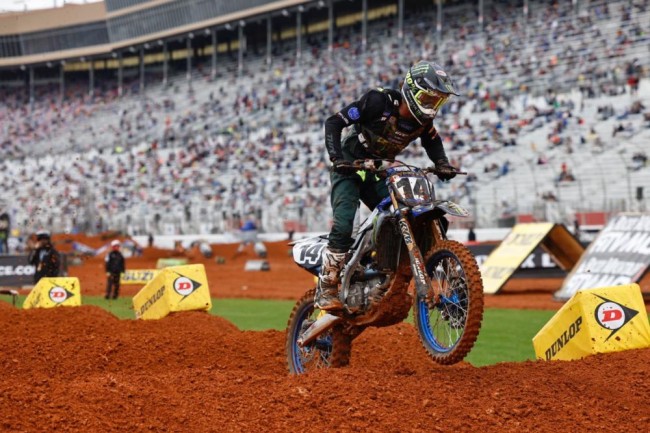 Dylan Ferrandis: The Frenchman rode a fantastic race after coming from the back of the pack to pass Ken Roczen amongst other to take a hard-earned fifth place in maybe his best ride of the season. Ferrandis has had a tough year results and starts-wise wise but his speed has been good and he says he now feels comfortable on the bike and as a premier 450 supercross rider. If he gets a start watch out!

“For sure, it was a good ride,” said Ferrandis, “but I’m a little disappointed because crashing at the start is never good. I was all the way back in last and came back through. I didn’t rush but just gave everything I had until the last lap. I passed some really strong guys, so that was a good feeling. I was really tired and had a little bit of arm pump, but it was good. It’s always good to be back in the top five, and with that kind of riding, it’s also good for your confidence. We made some small changes on the bike, and the team decided to go in one direction, and it was really good. The bike was much better today than the previous race, so we made one step in a good direction. I’m really happy.”

Eli Tomac: The defending champion really loves these supercross tracks located at the speedways! Tomac is a master at Daytona and although he got some help with Plessinger crashing and Sexton getting held up by a lapper in Atlanta, Tomac looked much more like rider we expected all year, running the pace at the front then getting faster as the race goes on chasing down the leader. Tomac is still 36 points behind Webb so the title is still difficult barring a Webb disaster but he is only 14 behind Roczen and right now, second looks a realistic proposition for Tomac with two more in Atlanta and Salt Lake City, all suiting the Kawasaki rider’s style.

“I’m still a ways out,” acknowledged Tomac on his title chances. “I’m still 36, so it’s still out there. Anything can happen, of course. That’s it. All I can do is try to win. The good thing is I feel like I have an advantage on this type of track, so we’ll see how it goes into Salt Lake and into the next few rounds.”

Chase Sexton: It was oh-so-close for Chase Sexton until Cade Clason got in the way and cost the Honda rider a likely first 450 win in his rookie season. Sexton. despite some traditional rookie mistakes this season, has shown impressive speed and self-belief that he can win races in his first year. He is right there knocking on the door and it won’t be a surprise if he wins one of the last four. Sexton is also starting to become a serious rival the number one rider to Roczen in the team once he sorts his consistency out.

Sexton said: “I feel like I was riding really well again. Cade, I just went inside trying to just get around him really quick. I knew Eli was right there. So, in that next corner it was pretty vulnerable to stop before that double and block pass. So, I wanted to get through those two corners really quick. Honestly, the one after that, my mechanic Jade put on the pit board “two laps to go,” and I was like, ‘Okay.’ I thought I saw the white flag. I thought the race was over, and I saw Eli keep going. I was like, ‘The race isn’t over.’ So, I rolled the next jump, and then obviously the race was over after that. It was just not the best ending, but first 450 podium which was a positive.”

Nate Thrasher: What a ride for the rookie in a win that came out of nowhere to win his first ever supercross despite qualifying via the LCQ! Once McAdoo went down Thrasher, who was struggling to top ten at the start of the West season, has progressed at a stunning rate to show why Star Racing Yamaha were so keen to sign him. It will be interesting to see if Thrasher can keep this level up but his composure out front was impressive especially as he hasn’t been up front at all as a pro.

Thrasher commented: “We got off to kind of a good start to the day in timed qualifying. We only had six or so laps on the track today, so you just kind of had to learn the track and adapt quickly. Second timed qualifying got canceled, so we had a decent gate pick going into the night that we knew could make that work. Then had a little trouble in the heat race, a couple crashes, but had good speed in the heat races. So, I felt like it was going to be a good night. I just needed to get in the LCQ and make good work. Got through that and ended up winning the night. It’s a surreal moment, for sure. I’ve dreamed of this my whole life, pretty much. So, it’s not sunk in yet, but it will probably be tomorrow. We’ll just take it day by day and then we’ve just got to keep getting better. There’s still things to improve on.”