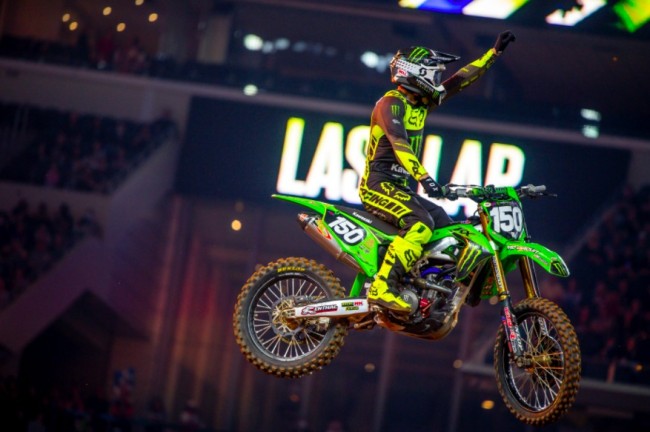 Seth Hammaker: This kid is truly impressive. Hammaker is late to the pro scene after injuries and health issues but now that’s he here we can all see why Pro Circuit Kawasaki boss, Mitch Payton, chose to stick with him.

Hammaker has been very good in the first two round showing poise and calmness and those key attributes came into focus again when he holeshot at Arlington and held off Jordon Smith, with Smith making the costly mistake, not the rookie. Hammaker was the one who kept his composure under pressure and won the race with time to spare over Hunter Lawrence.

Many rookies come in with speed but not many combine the speed with a clam, self-assurance and in-race intelligence not to ride over the limit – something veteran Jordon Smith is still to learn. Hammaker looks to be the real deal and Mitch Payton might just have found his next superstar if injuries don’t get in the way and Seth can keep his current focus and mindset without the distractions that money and success can bring off the bike.

Hammaker said: Where do I even begin? To be standing up here on the top step of the podium is truly a dream come true. If people only knew what the past two years of my life looked like to get to this point, it is truly unbelievable. My teammates didn’t make it easy on me tonight and really made me earn that heat race and main event win. It truly felt like the longest race of my life. I have so many people in my corner that I want to thank, most importantly my family for being there for me on the good days and the bad days. I want to thank everyone at Kawasaki for always believing in me, Mitch Payton, my mechanic Jacob (Martin), the entire staff at Monster Energy/Pro Circuit/Kawasaki, my trainer Ivan (Tedesco), my friends back home watching and just everyone for always believing in me. This is just the beginning and I can’t wait to lineup on Tuesday!

Cooper Webb: When it comes time to deliver, Cooper Webb might be the best in AMA racing at delivering. Ryan Villopoto used to be the king of this in the States but Webb now seems to have taken over that mantle. An unforced error by Roczen in the heat led to a bad start in the main but Webb made the best of a bad start in the heat race then delivered on the start and an early pass on Dean Wilson to take the lead and a relatively straight-forward win just when it really mattered. Now with seven rounds left, Webb has the red plate for the first time this season and has a seven point lead to go with it. He is the ultimate competitor.

Momentum is key and Webb has it all right now. The new championship leader commented: “This is an incredible night. I got a bad start in the heat race but I made some passes and ended up third. In the Main Event, I got a great start and made my way into the lead early on and I led every lap. It’s awesome and it feels great to have these Texas fans here. It was a huge night and to get the red plate is great, I’m super grateful.”

Jason Anderson: Ever since his injury Jason Anderson has been racing with a new mindset and a more ruthless and purposeful race-craft. He is determined to get to he front and get there as quickly as possible n matter who is in the way. He hit Stewart out of the road then left Ferrandis on the deck on his way to a season best third. And he didn’t really apologise either saying while he didn’t mean to knock Ferrandis down, he wanted to get to the front.

“I’ve been following those guys all year and I want to be on the podium and want to start doing good, so I’m going for it and that’s all there is to it,” Anderson said. “We’re going to be firing every time we come out of that gate for the rest of the year. Let’s go!”

Anderson’s starts still aren’t fantastic but he is riding more like the rider that won the 2018 supercross title and he is pretty exciting to watch right now!