Webb – the start is super important 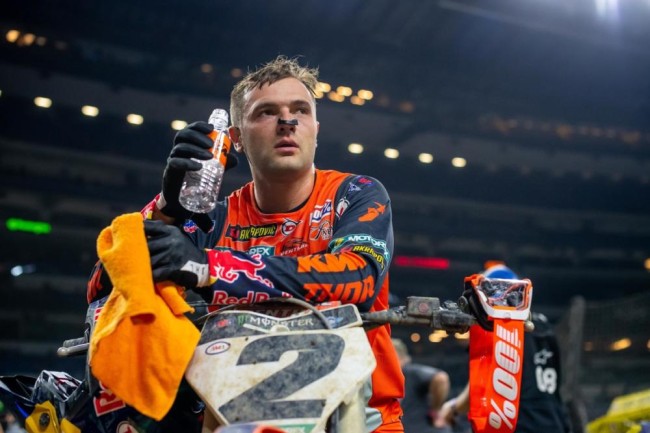 Cooper Webb had a tough might fighting in the middle of the top ten but the former champ’s fighting spirit came through again with| webb besting former schoolboy rival Adam Cianciarulo for third and crucial podium with title rivals Roczen and Tomac 1-2 in the race.

Webb is only six points behind Roczen thanks the a night where he absolutely limited the damage despite never showing that race-winning speed.

I think as you can see, the start is super important with the way things have been recently. We’re all super close. said Webb in the press conference. “I think tonight kind of showed. There’s three of us that are really fighting for it, and there’s a lot of other contenders too. It’s going to be just maximizing opportunities all year. There’s going to be bad races, there’s going to be good ones. So, I think putting yourself in a good position each weekend is important. Just riding the wave if you will. You’re going to have ups and down, and just try to be in it. I think it’s going to be tight. There’s a lot of good guys, so you never know. I think consistency is definitely always important.”

On his race, Webb said Savatgy impeded his progress in turn one. “It was weird. My start was really good. Joey, I don’t know how he came out like a rocket ship, but he braked super gnarly and I was kind of expecting him to push wide so I braked gnarly. Then Eli kind of went around the outside of us. I got bottled up behind him and ended up going back to fifth pretty early on, and then made a mistake in the rhythm. So, I got pushed back early. First lap I saw who was out front and I’m just like, Shit. Track position is key, and tonight was pretty hard to get around, especially in the beginning. Everyone was going pretty fast. “

“I just felt like I was trying to get around and started making a little bit of mistakes trying to force things. I kind of took a deep breath and just calmed down and accepted those guys being out there and out front and having a gap. Just knew if I could get around Ferrandis and Savatgy that a fourth was there, but if a mistake happened then we were going to be good. Adam went down, so that kind of made third more reachable. Like the guys were saying, it’s track position right now. It wasn’t great for those first two laps.”

Wen has another opportunity to go for the win tonight and the ultimate competitor will be keen to get back to winning ways after seeing who he believes to be his main title rivals battle in a world of their own on Saturday night.