Webb on the moment he felt he had Roczen covered! 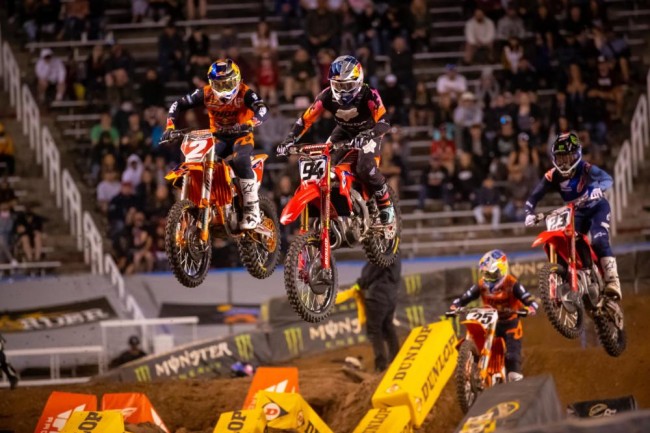 Cooper Webb gave a ruthless analysis of the moment he felt he had Ken Roczen covered, revealing it was after Roczen’s outburst in Daytona! The American explained why in the press conference and also revealed why he gave Roczen a bump in the final main event of the year!

“I think Orlando was the beginning of it but I think Daytona stamped it, seeing the emotions that went into that. I kind of knew right then and there, I got this guy [Roczen] beat. It’s crazy. Obviously anything can happen, but the mental side is the biggest part of our sport, in my opinion. When I saw the reactions, I just kind of in my head knew I’m right where I need to be. I was gaining stride. I was gaining confidence. I knew that it would be a fight and it’s going to be tough, but I just felt the momentum shift and I knew I’ve had this feeling before, so let’s go for it again.

On their battle earlier in the main event at Salt Lake City 2, Webb said: “I honestly wasn’t expecting it. I get it. You’ve got to try what you can, but I was a little annoyed, to be fair. I get it. It’s racing. If you go for the front wheel and make it work and break some spokes or whatever the logic was, I get it. But at the same time, it was quite a bit of a big points gap. For me it was the ultimate statement to be able to take my time, get around him, kind of give him a bump back. I don’t even know what he finished, if he got a top ten or not. It is what it is. It’s racing. For me I always want to be out front and moving forward and never looking back.”

See a re-cap of the Daytona incident below: