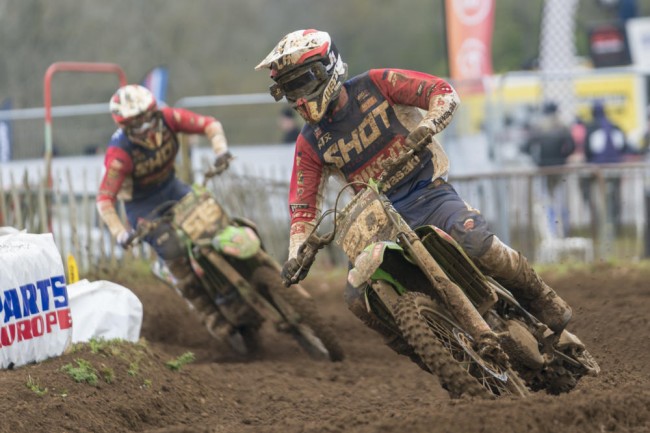 Round one of the REVO ACU British Motocross Championship kicked off yesterday just outside of Oxford, at the Culham motocross track. After recently traveling back from his home country in Australia, Wilson Todd joined his teammate Taylor Hammal for their first venture into the British MX2 Championship. With the World Championship starting in around 8 weeks, this was the perfect opportunity for time on the bike in a race scenario, which is obviously different from the hours of practice put in.

The day started off well, with Todd and Hammal posting 3rd and 5th in timed practice respectively, putting them in a great starting position for the day. Race one would see Wilson finish in 3rd after struggling with some arm pump. Hammal, after battling throughout the race finished just behind in 4th. After a few setup changes for the second race, Wilson was able to get the holeshot and lead the race, securing a 3rd and 1st for 2nd overall. Hammal narrowly missed the podium by 1 point after securing a 4th and 3rd.

“It was good to be doing the British again, the first time properly since 2016 – last time we competed here we won the MX1 with Tommy Searle. This year we are focusing on MX2 with Taylor and Wilson. Wilson’s only been in the country for a few weeks, having been at home in Australia since the end of the last season. This is our first year working with Taylor, we made a plan with Taylor in December last year which he’s stuck to, he’s slowly building part of a long-term plan. The same with Wilson, since he’s been back we’ve just been focusing on testing and suspension. We’ve come here with a pretty standard bike, just with a DVR exhaust, twin air filter kit, Suter clutch, and vortex ignition. It’s a true testament to how well Kawasaki has built this bike. We came into this race really without any idea how either of them would do. I feel like I have a lot of experience, and I’m really please with both of their performance. Taylor was solid in both races, and both riders were still strong at the end of race two. I trusted in Wilson doing his work back home in Australia, and he’s obviously got the work done which shows he really wants this for himself. Taylor, in these times, was a risky project, but together with local sponsors, we made a plan to take him to the next level. He’s been working on his program with us, and he can definitely see the benefits of it. Wilson got some arm pump in the first race, with this being his first race in a long time and first time riding Culham – he could have probably got second but played it safe. A holeshot in race two set him up perfectly, and although Conrad Mewse won the first race by 50 seconds, in the second race Wilson was able to ride strong and keep the distance where necessary to take the win. I was gutted for Taylor to miss the podium by one point, but I’m really happy with the results. This is all part of the process of getting ready for the GP’s and the next stages of testing.

A big shout out to Jordan and Nick, we’re a very small team and those guys continue to put in such great work. As always thanks to our sponsors old and new for this 2021 journey”

“The weekend went well for me, being inside the top 3 all day was good. I wasn’t quite the fastest guy all day, but it was very productive to get out and try the setup. Getting back out there behind some gate drops and getting the feel for racing again is really helpful too.”

“It was a pretty good start to the championship which, to be honest, I didn’t expect. Overall was a good solid day with two good motos. The first race had to battle all race but was a close finish at the end and second race pulled up to 3rd. A 4th and a 3rd is a positive start which I’m pleased about. Bit gutted I missed the podium but was happy with my riding. We got a lot more to give to will keep on building. Big thanks to the team all round for getting everything done for the first round and to all those who help me out”