Webb, Musquin and Vohland on contrasting fortunes in Houston 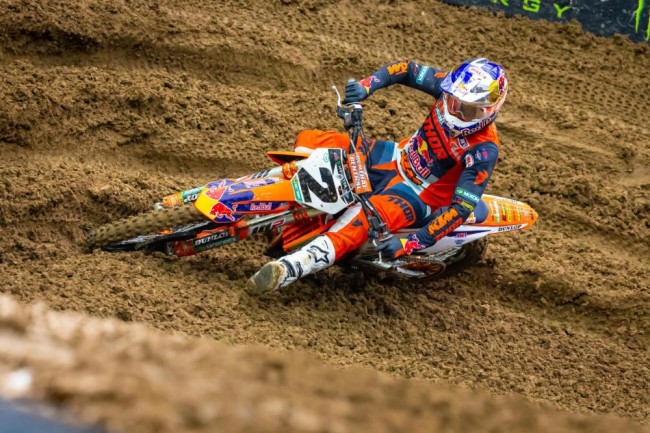 Musquin, who missed the entire 2020 Supercross Championship due to injury, came into the opening round ready to race, securing a top-three qualifying position in the stacked field of 450SX riders. He powered his KTM 450 SX-F FACTORY EDITION to a top-five start in 450SX Heat 2 and he quickly moved into fourth on the opening lap. He battled inside the top-five early on but a crash late in the race sent him back a few positions, ultimately salvaging an eighth-place transfer to the Main Event.

In the main, Musquin had a swift jump off the start and he charged to the first turn, capturing the holeshot in his first Supercross Main Event in quite some time. He diced around the top-five early on but he really found his groove in the second half and continued charging into a podium position by lap 13. From there, Musquin focused his energy on maintaining a comfortable gap over the fourth-place rider and he did just that – placing his Red Bull KTM Factory Racing machine on the podium once again in Supercross.

Musquin:“It’s good to be back. I had a great start in the Main Event, they were a little more aggressive than me right away, it’s been a long time since I’ve raced supercross, but we did everything we could to be ready for the first round. I knew the starts were going to be important and I’m super happy I made that happen and put myself in a good position to fight for a podium. I’m happy with the changes on the bike and I feel like the fitness will only get better and better with racing.”

For Webb, it wasn’t the season opener he’d hoped for but the 2019 450SX Champion made the best of his night in Houston. In 450SX Heat 2, Webb shot off the line aboard his KTM 450 SX-F FACTORY EDITION, where he captured the holeshot and was able to create a decent gap early on. He was soon joined by Zach Osborne, who ended up getting by him late in the race, giving Webb a second-place finish in the heat. He didn’t get off to a great start in the Main Event so he immediately put his head down and charged through the pack. Climbing into the top-10 early on, Webb maintained a solid pace but he wasn’t able to maximize passing opportunities late in the race. After 28 laps of pure battle, Webb finished just inside the top-10 with a ninth-place position at Round 1.

Webb:“The heat race went pretty good for me, I got the holeshot and led a majority of it and got second. In the Main Event, I got a really bad start and just struggled to come through. The track was really hard to gain time on tonight and I made a few passes but I struggled. We’ll look to get a lot better for Tuesday.”

In the 250SX Eastern division, Maximus Vohland, fresh off a successful amateur racing career, dove right into his professional Supercross debut with a favorable third-place start in 250SX Heat 1. He mixed it up with some of the top riders in the class, bouncing back-and-forth inside the top-five. He made his way up to third halfway through and fell just short of a podium finish in his first-ever heat race attempt.  With a solid gate choice heading into the Main Event, Vohland secured a top-10 start aboard the KTM 250 SX-F. A crash shuffled him back to 12th early on but the young rookie diligently worked his way up to ninth just before the halfway mark. He kept his focus laser sharp throughout the remaining laps, where he secured an impressive ninth-place finish in his debut.

Vohland:“The first race went good. I made some mistakes but it’s a learning experience and we’ll make sure to come back on Tuesday to fix those little tweaks. The goal was top-10 and that’s what I achieved tonight, so we’re happy with that and we’ll pick up on a couple of those things and try to come back and get a better result on Tuesday.”