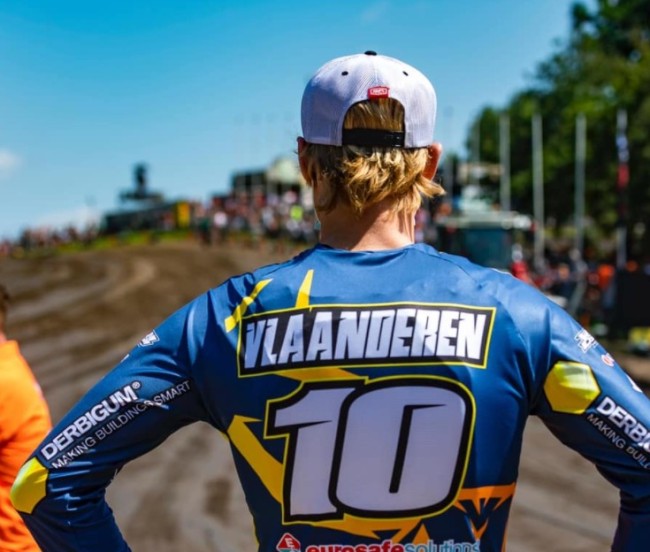 Oss made a return to the MXGP World Championship calendar this weekend with it last holding a Grand Prix in 1998. It was the home GP for Gebben Van Venrooy Yamaha Racing and they were hoping for some good results. The track presented a rough, bumpy and gnarly circuit for the MXGP riders.

In the first moto of the day, Calvin Vlaanderen didn’t get the best of starts which is all so important in MXGP but he battled through from twelfth to come home in tenth. There was a group just ahead of him he felt faster than but he just didn’t have enough time on the clock to mount an attack. The story of Kevin Strijbos’ season continued – bad starts. From outside the top twenty he made passes and got his way into fifteenth which was a good recovery ride. Brent Van Doninck was just outside the top ten when he had a big crash and being in so much pain he pulled out of the race but after a trip to the medical centre he decided to line up in moto two with a lot of pain.

The second moto was a good one for the team with Vlaanderen coming out from outside the top ten to finish an impressive seventh – his best moto of the season to date. Van Doninck toughed it out and rode really well to come home in ninth and even set his fastest lap time of the race on the final lap to hold off Seewer. Things were looking good for Kevin Strijbos in eleventh but with three laps to go he crashed and it demoted him to eighteenth which is where he finished.

All three riders clearly have top ten speed and will be looking to be more consistent as the season progresses. The team will now get ready for the hard pack Loket circuit in Czech Republic which will host round five of the series.

READ  Vlaanderen impresses at Lommel as Van Doninck battles with a broken rib!

Calvin Vlaanderen (8th overall):  It was a solid day for me at our home GP in Oss. It wasn’t the easiest time practice but managed to get the eleventh quickest time which was okay. In the first race, I did not get the best start and got passed a few times the first two laps. I managed to find a rhythm and come through to tenth, I could see eighth and I felt I was faster than them but I just didn’t have the energy left to catch and pass them. In the second race my start was alright but the first two corners was chaos with many riders going down. I managed to come through okay and had a solid moto to come home in seventh. I am happy with the day and looking forward to keep this momentum going.

Brent van Doninck (16th overall): Today was a rough and tough day. I didn’t feel great with the track and I was struggling the whole day. In free and timed practice I couldn’t do better than twenty-first. In the first moto, I had an okay start around tenth or eleventh but then dropped a few positions. I was riding in thirteenth but then with eight minutes to go I had a big crash and hit the face of a jump with my back. I couldn’t really breathe and I had to pull out it was so painful. I did a quick check up at the medical centre and there was nothing serious even though it was really painful. I decided to line up for the second moto and the first three or four laps were so painful but then with some adrenaline it got a little bit better and also because I was warmed up after a few laps. I had to dig deep because the pain was hurting my back and I was exhausted at the end too like many riders I think. I was quite happy with the second moto getting ninth. Once again I couldn’t do two solid moto’s and that was my goal this weekend. Anyway, I still have a few chances and I have the same goal for Loket.

READ  Vlaanderen impresses at Lommel as Van Doninck battles with a broken rib!

Kevin Strijbos (18th overall): Our home GP didn’t go how I wanted it to. We tested during the week with the engine and we thought it was better because we tested it at Lommel. But we came to the track and it was not too bad but during the moto I felt it wasn’t the way to go engine wise so I struggled even though my lap times weren’t that bad, I just felt I struggled and couldn’t ride how I wanted too. We changed the spec in the engine before the second moto and I finally I had a good start, the first time this year. But then Seewer and Coldenhoff went down and after Seewer got ran over he went my way so I got pushed into the mud. I was almost dead last but I felt better and could push so I came back to eleventh. With three laps to go I crashed by myself in the second corner, it was a small crash which was stupid but I got stuck and I couldn’t get out. It took me a while and was eighteenth which is where I finished. After the crash I was quite tired but anyway like every weekend the speed is there – I just need to turn it into two good moto’s.  The track was really sketchy and tough today so we will recharge the batteries and then head to Loket.