Vlaanderen impresses at Lommel as Van Doninck battles with a broken rib! 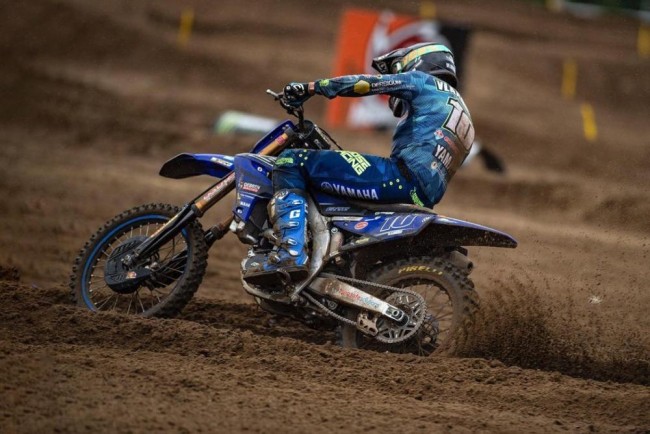 It was time for the toughest MXGP on the calendar with the deep and gnarly sand track of Lommel hosting the sixth round of World Championship action. After the EMX and WMX action on Saturday the track was left rough overnight which meant conditions were brutal for the MXGP World Championship riders.

Calvin Vlaanderen has been showing good pace all season long on his Gebben van Venrooy Racing Yamaha and has been searching for consistent results. It’s all starting to click into place as Lommel was another strong Grand Prix for Vlaanderen as he excelled in the bumpy and tough conditions. Two solid starts and consistent races saw him come home tenth in both races for eighth overall.

Since a crash at Oss, Brent van Doninck has been battling with a broken rib and yet again he battled through the pain barrier at Lommel – not an ideal track to be riding in pain. The Belgian toughed it out and ended up going 18-16 for eight hard fought championship points.

It was not the home Grand Prix that Kevin Strijbos would have wanted. After a pair of DNF’s, the Belgian will dust himself off and prepare for round seven of the series at Latvia.

Calvin Vlaanderen (8th overall): It was a solid day to go tenth in both moto’s. It’s alright and I am quite happy with it. Obviously I would like better results but I am happy with being consistent and having two solid moto’s. Qualifying went pretty well and the track was already so rough as they left it from Saturday. It was tough to do that one sprint lap but I had a good time with ninth to give myself a good gate pick for the races. I had a pretty good start in the first moto and I made some passes at the beginning as I had a good flow. The rain came down and my gloves got really wet so I lost a bit of my flow as it was tough to ride so I went back to tenth. The second race I had an okay start and was in around eighth or ninth position before finishing tenth in the end. It was alright and we will take the points before moving onto Latvia which is one of my favourite tracks.

Brent van Doninck (16th overall): It was a rough day after breaking my rib two weeks ago at Oss. As you know I tried to race at Loket but it was too painful. This week it felt a little better and I felt I could race. I got some points today so that was good – I couldn’t ride at my full level. I was probably at about 70% and I didn’t want to hurt myself again so I was trying to ride smart and take some points. I hope to do the same thing at Latvia or a little bit better and after that we have some time off to recover. Hopefully I can ride at my real level soon again. Thanks to the whole team for the hard work because it was a rough day at Lommel with the rain.

Kevin Strijbos (31st overall): It’s a struggle bus at the moment. Not much to say except sorry to the team for my performance.