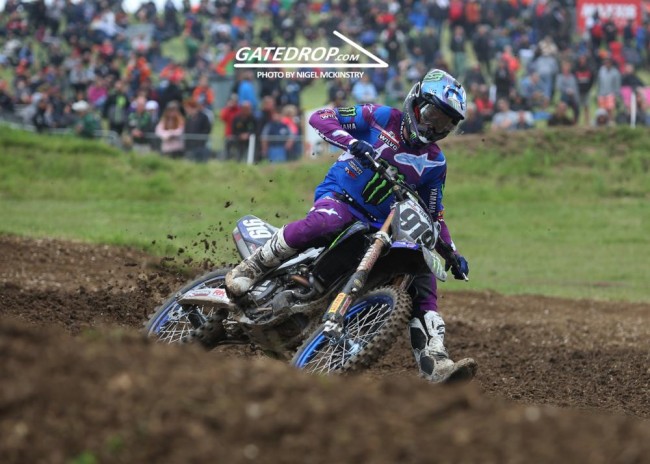 The news that MX2 World Champion Maxime Renaux will pivot from two successful seasons in the 250 class and jump into the three-man Monster Energy factory team at the age of 21 is unsurprising to say the least. Renaux comes across as level-headed and focused individual when it comes to his career path. Losing a year to a wrecked shoulder and damaged nerves has clearly given him some perspective on his choices and the narrow window of timing. He spoke repeatedly of staying on the highly competitive YZ250F and defending his title in 2022, especially when he still has another two seasons in the class before aging-out. There was a sense as well that Renaux was piqued by the continual accusations that his 2021 championship was secured on the back of Tom Vialle’s injury and brief absence in the campaign. There is little love lost between the Frenchmen; Vialle apparently was the rider that clashed with Renaux in the French Championship race at Ernee four years ago that led to the new champion’s severe shoulder injury. For all his wishes and sound reasoning towards MX2, Renaux eventually accepted a two-year contract to begin his MXGP chapter but should he be worried?

Yamaha’s MX2 year has been superlative. All three riders – Renaux, Jago Geerts and rookie (2020 EMX 250 European Champion) Thibault Benistant – won motos in 2021. Renaux and Geerts owned ? of the ? rounds and claimed 1-2 in the championship. It was a milestone term for the likeable Hans Corvers and his patient outfit.

Further along the Yamaha alley in the paddock, the MXGP squad were struggling. Jeremy Seewer took most of the season to regain his health and fitness, high-profile (and undoubtedly pricey) new recruit Glenn Coldenhoff could only deliver two podium finishes amidst rumours of dissatisfaction in setting up the YZ450FM to his liking. Rookie Ben Watson, the in-form MX2 racer at the end of 2020, was briefed to learn during his first term in MXGP but was then swiftly booted to the sidelines and kept in the dark by race management when a predictably inconsistent maiden season was suddenly not good enough.

With Seewer and Coldenhoff under contract for 2022 and questions being asked about how Yamaha can quickly improve their performance in MXGP during the hardest and most competitive era for the class, the onus inevitably fell on knee-jerk changes. Yamaha are likely to be the only factory team with a three-rider line-up for 2022 as Red Bull KTM slim their roster and the Austrian company reorganise their brands on the back of Tony Cairoli’s drift away from full-time competition. Yamaha dithered on Watson’s contract renewal by mid-season. Rumours of Jorge Prado potentially looking to break free of his KTM deal started to accelerate and alerted the attention of most MXGP team bosses. Yamaha were repeatedly seen in contact with the talented young Spaniard, although they were careful to state that they’d never sign a rider that was already tied to another manufacturer. Prado would have to instigate his own liberation and come onto the market. It was around this time that Renaux’s title bid was looking more and more secure as he went on a run of nine podium finishes in a row.

It was a complicated situation for Yamaha in MXGP as KTM, Honda and Kawasaki wrestled for honours. The nadir was the Grand Prix double header in Turkey where the trio were scraping the top ten for points around the tricky Afyon hard-pack. They had the chance to snare Prado and also had to examine the chance of accommodating their star youngster who was nearing their first world title since 2015 and first in MX2 since 2007.

Either way it left Watson in the cold. Yamaha were perhaps unimpressed by the Brit’s hesitancy at attacking some of the tracks where he was visibly uncomfortable (and the 24-year-old already stated before the end of the season that his overly cautious approach was a misjudgement) but he also showed top ten speed and flashes of promise to indicate that he was fulfilling his initial brief and finding his feet in MXGP. A five-minute study of Watson’s career would show that the Brit is something of a slow-burn talent and the questions over his aptitude for a race situation have dimmed in the last two years with a hardening determination to match his ability. If Yamaha were quick to pull the trigger (or not, it would seem, as they let Watson drift into contract limbo) then it indicates that Renaux might also be given short thrift if he doesn’t deliver from the gate drop.

The ideal of the privateer has all but faded from MXGP. It’s fitting that another Brit, Shaun Simpson, called a halt on his eighteen-year Grand Prix career at the end of 2021 because it was the Scot who took the last GP win as a privateer in 2013. This situation means riders are scrambling for limited factory seats or satellite saddles that vary greatly in their resources and funding (which is a nice way of writing that some salaries for racers are scandalously low). The riders market is even more cutthroat. Some are dropping – or even removing – their price for the right opportunity, some are realising that the risk and the effort is barely worth it. It feels like ripe opportunities in MXGP are hard to come by. Watson was winning Grands Prix just over a year ago. Now he is one of a growing crop that has been backed, evaluated and dropped at a ridiculously early age, well before most people would recognise as an MXGP rider’s peak in terms of fitness and experience. Perhaps he will be fortunate to find another factory to take profit of his expanding possibilities.

If we remove the socio-economic circumstances around MXGP and look at MX2 history since 2010 then Renaux’s chances of blossoming his career seem rather good. Marvin Musquin, Ken Roczen, Jeffrey Herlings, Pauls Jonass, Tim Gajser, Prado and Vialle were all champions that were thoroughly supported in the subsequent phase, although almost all hit the ground running in the next challenge; even Jonass was 2019 MXGP Rookie of the Year. The only anomaly is 2014 winner Jordi Tixier, who had already signed for Kawasaki in MX2 in 2015. Even then Kawasaki filtered him into a learning season with KRT on the 450 for 2016.

It could be argued that Renaux is better than Watson, and more deserving of fuller Yamaha investment for MXGP. It will still be curious to chart his progress in what will be his third team in three years and in a time where – oddly – the pressure to produce is higher, even though the difficulty of the task is also mammoth; as Watson’s endeavours and treatment showed in 2021.