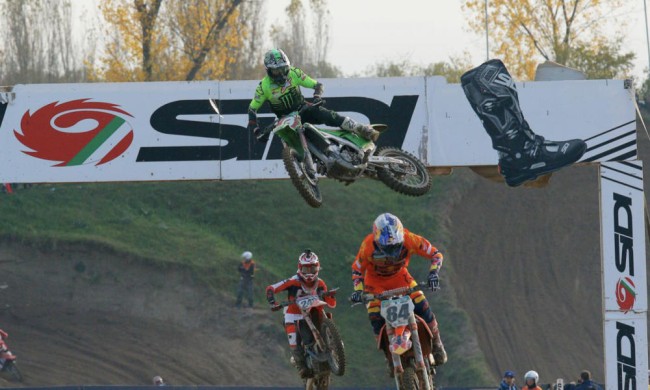 We all know the story by now. After 35 motos and 17.5 Grands Prix in a frantic second pandemic season of MXGP, a five-rider slug for the championship narrowed to just two racers – Jeffrey Herlings and Romain Febvre – who tied on points after the first of two outings at Mantova for the finale.

The two-hour build-up to the all-decisive second moto in Italy two weeks ago was as anticipated as I can remember from two decades working in MXGP. In 2014 a limping and gaunt Jeffrey Herlings stood an outside chance of his second world title in Mexico and was beaten to the post by teammate Jordi Tixier by just four points. In 2008 David Philippaerts – in front of a nervous partisan crowd at Faenza – needed just three points from the last moto to defeat Steve Ramon and did his best to steer clear of the other Suzuki rider, the barrelling and bold Ken De Dycker, to squeeze to the post by 14 points. Mantova felt a whole new level of drama, especially when Herlings and Febvre lined up next to each other in the gate…

Fast forward almost an hour after that gatedrop and climax. Outside the Media Centre in Mantova there are noisy chants, shouts, music. Herlings’ title is being celebrated and acclaimed by a sizeable crowd that decided to skip work or college/school for the Wednesday showdown. The fuss is amplified for Tony Cairoli’s MXGP swansong. In walks Febvre alone. He trundles towards the press conference table at the head of the room, silver medal already in place around his neck and sits down. He stares into space and then bows his head and holds it in his hands. I quickly look to see if he’s scanning a page of results or looking at a phone and come to the realisation that the 29-year-old is processing the missed opportunity and perhaps recycling the brief second moto tumble that ended his aspirations of the title. It’s a heart-melting moment.

After what seems like an age, Tim Gajser enters the room and makes his own lonely walk to the other side of the table. The celebratory noise outside continues. Gajser also looks solemn. He sits stern and expressionless. Both riders wait. It is a sad tableau eventually disturbed by the entry of Herlings: a completely contrasting ball of energy and animation as the 2021 world champion.

The Dutchman is gracious and respectful with his comments but the reactions and the body language of the three participants speak much louder regarding the emotional drain and power of the outcome of the series. At least two of the trio finished on the podium in sixteen of the eighteen Grands Prix. There were exciting cameos by the likes of Cairoli and Jorge Prado but these were the athletes that crafted such a gripping and rare contest of attrition.

Herlings was brilliant and deserved the championship. He had the most wins, most moto chequered flags, most podiums and dwarfed qualification with 13 pole positions from 17 attempts. It might have been a minor travesty if he somehow missed the goal. It was also a fine story after his injury nightmares of 2019 and 2020. His achievement showed that the ‘monster’ of form and results from an imperious 2018 was no freaky fluke. Gajser is an MXGP force of nature and the only shame of a season where he lacked the starts and, ultimately, the wins (just 4 GPs and 7 motos), was that the Slovenian missed out on being only the youngest rider in the history of the sport to notch five world titles. However, so much credit much go to Febvre. The Frenchman was sanguine on his chances of the crown. He admitted being satisfied merely to have a sniff after five campaigns of injury frustration and hiccups. The Kawasaki man went so close. Those nine podiums driving him into the final joust with the awkward-looking red plate on the green KX, four of those trophies coming in the last four rounds. He claimed only one Grand Prix win in 2021 but Febvre was the outlier that kept Herlings and Gasjer – the two main title combatants since 2018 – looking over their shoulders. His part in the show enrichened MXGP even more.

Febvre was the first to leave after the press duties had been completed, making a swift exit to the sanctuary of his soon-to-be defunct team. Gajser made a similar dash and Herlings was spirited away into a series of photos, celebration scenes, prize-givings and eventually a riotous Red Bull party. Darkness descended on Mantova but the Kawasaki team soon lit-up the paddock with their own festivities to mark the end of the season. Disappointment had given way to acceptance and congratulation and the destruction of the KX450F with alcohol perilously poured on a red-hot exhaust were just some of the sights as the team wrapped 2021, an era of Kawasaki stewardship and their own existence. Febvre’s forlorn post-race form had been replaced by joyful recognition and a desire to join in the mirth as a chapter ends.

From close and unpredictable action, surprising mistakes, collisions, crashes, near-misses and palpable tension, 2021 delivered an immaculate story that every race fan craves: the best riders, on the best bikes in the best conditions battling to the final minutes for the biggest prize. Mantova – round eighteen of eighteen, home to races 35 and 36 of 36 – introduced ‘anxiety’ and ‘pressure’ as other characters but the emotion emphasied the impact.

It only it was like this each season. Or would too much of a good thing lead to dilution? Whatever the final summary of 2021, it will be short-lived. As Herlings himself said in that closing press conference gathering “in three-four months we go again, so there is not too much time to enjoy it. This was the most difficult championship but, wow, it was special.” What happens when all the tension, the nerves and the questions built up over weeks and months evaporate?